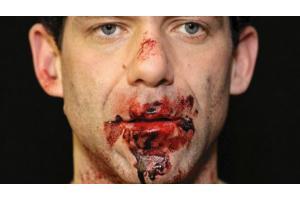 “Eddie: The Sleepwalking Cannibal” is literally what you think it would be about from the name. A mute man named Eddie has the dark talent of turning cannibalistic once he falls asleep. Throw in a creatively starved artist using Eddie’s night attacks as inspiration for paintings and you have the full picture. Let me make it clear that this film is listed as a horror comedy which aided me in examining the purpose behind this plot. If you love “Shaun of the Dead” and the satirical yet bloody good “Cabin in the Woods” then...you’ll probably want to avoid this one. This indie sleepwalker has a smooth story but as a whole is missing the fun satire and horror that it promises.

The story begins by introducing Lars, played by Thure Lindhardt (“Angels & Demons”), a famous painter trying to get his creative juices flowing again in the hopes of creating his life’s masterpiece. Accepting a teaching position at the small town art school Koda, Lars is told that he will be sharing a home with the mute Eddie, played by Dylan Smith (“Immortals”). Lars is instantly attracted to a fellow teacher named Lesley, played by Georgina Reilly, and makes many attempts to connect with her. Lesley explains to Lars that Eddie has the tendency to sleepwalk and attack animals due to a traumatic event from his childhood. It’s only when Eddie feels safe that he can overcome his cannibalism and have a full night's rest.

Over several nights Lars finds Eddie outside eating rabbits and other wild game with no recollection of his actions in the morning. One night Lars purposely leaves Eddie’s door unlocked in the hopes he will kill the neighbors annoying dog, however Eddie kills the neighbor instead. This horrifies Lars yet he becomes inspired by the gruesome scene of blood spatter and torn flesh to paint a new work of art. Throughout the rest of the film Lars searches for worthy meals for Eddie to devour in the hopes of creating a new series of hard hitting art pieces. In the end, Lars has to decide if using Eddie’s skills will endanger them both or if they can continue their partnership unnoticed.

The concept itself is clever and goofy enough to be a winner but the film never reaches the points that it sets up. The killer Eddie is actually portrayed as a lovable and kind individual that wants to do anything to keep himself from sleepwalking. This would have been a great set up for dark comedic moments but the film instead focuses on steering it down the path of sympathy. I spent most of the film feeling sorry for Eddie because he just wants to be normal like everyone else. It made it difficult to laugh at the over the top scenes of Eddie attacking his victims. There’s even a scene of Lars riding a snowmobile while dragging a rabbit carcass on a fishing pole followed closely by Eddie. I understand what the director was trying to do but it just felt depressing. The real antagonistic role goes to Lars who takes a Dr. Frankenstein approach to Eddie’s curse. There are moments that try to play up his use of Eddie as comedy but ultimately left me hating Lars for his lack of consideration. Obviously this is a horror film so the need for likability in characters is not completely necessary, but to evoke the correct type of laughter, likability is vital.

A better way to categorize this movie would be to call it a dark drama because it’s void of comedy and light on the horror. There are several shots of bloody limbs, animal corpses, and Eddie biting into his screaming victims but there’s nothing intimidating about any of them. The images themselves should make a horror fan understand the directors intent but they look cheap and forced. If it weren’t for the fake blood and plastic body parts thrown into scenes then this film would be nowhere near the genre. There are jump scare moments thrown in but they are completely forced and honestly confusing to what’s happening in each scene. At one point Lesley is looking over some of her students work when Lars steps in the room and makes her jump. This all happens in a classroom, full of students, during the day, with no hint of fear in the plot yet.

It should be noted that this is the first theatrical release for writer and director Boris Rodriguez. It’s clear that Rodriguez has no problem creating original and clever storylines for his films but struggles in incorporating the elements that make the horror genre tick. He had a strong foundation to work off of with a sleepwalking cannibal, I mean the title alone drew me in, but he failed to utilize his own creativity. He should’ve taken a few notes from “Fargo” from a dark comedy sense and it would’ve been a standout indie film. “Eddie” isn’t a terrible horror movie but there are much better versions from this subgenre to even consider watching this over them. The promising aspect of this is if given a few more horror lessons and a dash of funny juice, Rodriguez has a good chance at making a great film in the future.