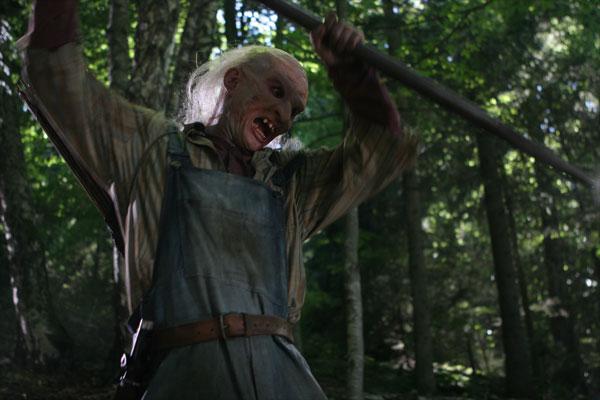 When last we visited the backwoods of West Virginia in 2007, we traveled in the company of Henry Rollins, Ken Kerzinger and a number of rather unpleasant mutants. The feature was a far cry from the first attempt at this series in Eliza Dushkus "Wrong Turn", with ramped up campiness and over the top gore. In "Wrong Turn 3", the franchise has attempted to dial back the camp once again and place itself somewhere in the middle between its two predecessors, with poor results and a huge helping of mediocrity.

Where "2" played with the idea of a reality survival show, "Wrong Turn 3" introduces a number of hardened criminals into the mutant backwoods denizen's diet. When the prison gets wind of the prisoner's escape plan on their upcoming transfer, they try and change things up. Changing the trip by a week and sending the bus on an alternate route, they figure that the plans will be thwarted for sure. What they weren't anticipating is that the new route runs through the backwoods of West Virginia, the very same woods featured in the first two films, and the natives are hu ngry.

When the decision was made to cut the camp and genuine B-Movie traits from "Wrong Turn 3", the filmmakers thought they were going to be making a taut thriller with some highly stylized kills. Instead, they managed to cut out most of what made the second film entertaining. Packed with horrible dialog and slow pace, the film fails to be exciting at all throughout its 92 minute run time. The plot manages to stay fairly whole throughout and hits the basic notes of what makes a "Wrong Turn" film. It's the absence of humor, well spaced action and crazy hillbilly death contraptions that make this film simply dull.

Sure, the backwoods family we've come to expect are here and they have many elaborate traps setup to snatch them up some vittles. They just aren't used as effectively as they could be. Where in previous films there was a constant stream of death and destruction, this places too much stilted and cliche dialog in between. In fact, if you were only in for the rental price of this film for the kills, you could actually do yourself a favor and watch the trailer. They show nearly every bit of Cooter's Death Fantastic in the reel.

"Wrong Turn 3" is a case of a film where I could simply ramble on for pages about how dull it is, but there isn't much of a point in doing so. Even the acting in the film feels flat and uninteresting. In all of the stereotypical prisoners making the trek through cannibal country, only one actor appears to be making any effort in the acting department. Tamer Hassan's Mexican gangster is by the book as far as these characters go, but he actually gets into the role a bit. Nobody else really bothers. This could definitely be a case of a kernel of corn the pile of feces but at least there is effort on his part.

The one note that they hit right in this film is in the franchise stalwarts, the crazy mutants we've come to know from the two previous efforts. I've never been a fan of their design; their looks haven't changed much over the three films and for me they always looked rather cartoonish. They have however stuck to their standards and written them in as to be expected. Their trademark human traps are back as well giving us a few great kills throughout the film, a custom setup for us by Joe Lynch in the second film. Some are creative, some are standard, all are sufficiently gory and look pretty good. They've made poor use of CGI for the blood flow here but other than that, watching bodies get sliced into cross sections or any variation thereof is generally entertaining to watch.

For the record, I was in the camp that felt that "Wrong Turn 2" was a definite improvement over the first film to kick off the series. Sadly, "Wrong Turn 3" tries to bring itself back in line with that first film and falls short do to bad dialog and mediocre acting. Where this could have been thrilling, instead it felt sleepy and boring. It would have served them well to follow Joe Lynch's precedent and ramp up the camp even more.