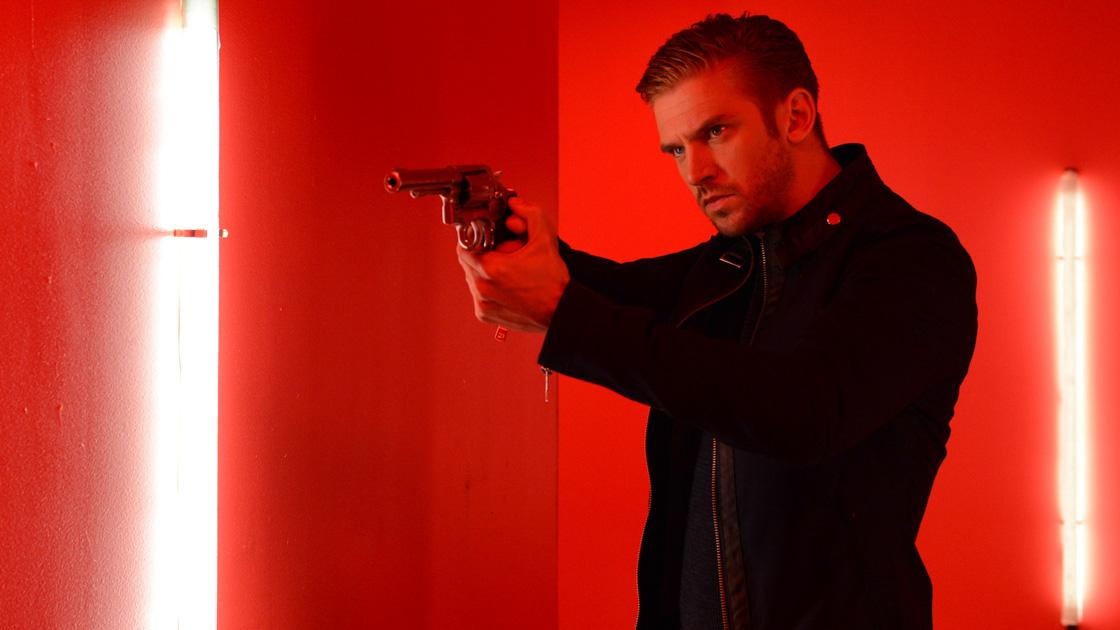 Homage is a challenging subject to tackle. Consistently creative types attempt to capture the magic that they enjoyed when young by mimicking the steps and procedures of their heroes. Regarding Adam Wingard’s The Guest those prior heroes are people like John Carpenter, James Cameron, and the bard himself William Shakespeare. Mixing elements from such classics like Halloween, The Terminator, and using the framework of the Shakespearean hidden-identity classic Tartuffe keeps this modern 80’s thriller on par with some of the best homages seen in recent memory.

The Peterson family is still reeling from the death of their oldest son Caleb, who to their knowledge was killed in action in the middle east. David (Dan Stevens), a stranger who claims to be a soldier and friend of Caleb’s, introduces himself under the auspices that he’s been instructed to send Caleb’s love. Seeking in part to replace the emptiness of her missing son Mrs. Peterson invites David to stay with the family until he’s back on his feet. But David has ulterior motives that reach beyond anything the Peterson family has any understanding of.

Coming off the critical and financial success of You’re Next, this film is an interesting and surprising choice for Wingard, who along with writer Simon Barrett is a part of the ‘Mumblegore’ group of horror filmmakers doing innovative projects on the indie circuit. There isn’t a big hook for the film like You’re Next’s animal masks, Cheap Thrills escalating dares, or the V/H/S series anthology they’ve helped produce. It’s a simple, straightforward and almost classical secret identity tale. The film was apparently inspired by a double bill of Halloween and The Terminator that the duo saw in the theater sometime over the past year or two. This pushed them in the direction to adapt that same basic concept: a singular unstoppable force that destroys everything in its path. There are clear tethers throughout that vacillate from horror, to sci-fi, to revenge thriller and their inspirations are apparent. The usage of Tartuffe as a framework is what really makes the movie shine though.

Maika Monroe and Brendan Meyer play the Peterson children and are in flux on their opinions of David throughout the film. Dan Stevens plays the character as wholesome, charming and chivalrous one scene before promptly offering Luke Peterson (Meyer) a switchblade to deal with bullies or knocking out ex-boyfriends at parties. Even the audience isn’t exactly sure what to make of David and is always waiting for the other shoe to drop. But Stevens plays the character with such wit and earnestness that you want all of the fantasy around David to be reality. Even when high-level military brass is clearly terrified of news that he’s possibly alive, there’s still hope David isn’t all bad.

The film’s primary faults lie in its third act. The action sequences and performances still remain peak caliber, but the narrative and motivations for character’s actions becomes vague and truncated. One or two allusions to certain conclusions that may or may not be hold back the film from a major third act wallop and leave it relying solely on its shock factor and expert direction.

With one or two tweaks to the tail end of Barrett’s script The Guest could’ve been a real classic, and might’ve even found more financing and a major wide release similar to You’re Next. Even still it can look to a stand out performance from Dan Stevens, who I’m sure we’ll get to know better very soon through Hollywood pictures, exceptional set design, and a few flat out jaw dropping sequences that still make it a great piece of indie entertainment.