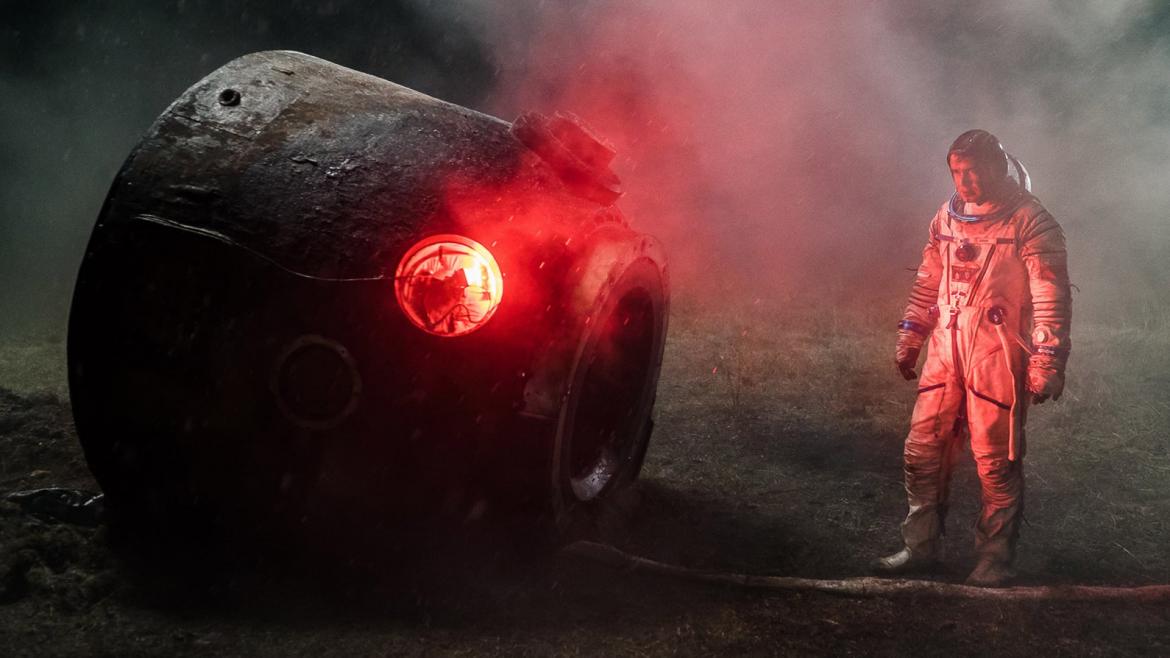 Soviet cinema did not take its first small steps into horror. After decades of suppression under Soviet Regime, media was used as a tool for education and propaganda, meaning that horror just did not fit. However, as time progresses Russia has incubated several fantastic horror projects(1), and Sputnik is a creeping parasite that has finally emerged from its host.

Sputnik is the feature film directorial debut of Egor Abramenko. Adapted from his short film The Passenger (2017), the film opens in 1983. We are in the last hot spots of the Cold War. Two cosmonauts are performing an orbital research mission when suddenly they are set upon by something. When only one cosmonaut, Konstantin Veshnyakov (Pyotr Fyodorov), returns alive, there is something very wrong and unfamiliar about him (but likely familiar to the average sci-fi/horror fan). A controversial doctor, Tatyana Klimova (Oksana Akinshina), who we earlier see almost lose her ability to practice medicine, is brought in to assess Konstantin’s fitness to be discharged. As she uncovers more about Konstantin’s condition, she must take drastic action to separate him from the alien parasite he brought back.

You could write this film off as another rip-off of Alien (1979) or the Thing (1981), and it does feel as tropey as can be for a genre film. We all may wish to retire the “let’s use a potential uncontrollable being as a military weapon” villain motivation at this point. Where Sputnik sets itself apart though are in the thematic ideas of carrying trauma as a monster and the importance of companionship. From the opening scene in which the two cosmonauts sing together to a subplot involving Konstantin’s son, we explore the importance of supporting relationships on mental health, the mundanity of heroism, and an emphasis on self-sacrifice for a greater good (sometimes when unnecessary).

Akinshina delivers a quick-witted competent character with a past we never fully explore. That said, she is not a James Cameron female protagonist and she employs her emotions when solving problems. Her interactions with Fyorodov are compelling to watch and I enjoyed their chemistry, despite it feeling rushed. Through the film's disorienting shots and brutalist architecture setting we feel the isolation of the characters. By the end Tatyana has become free from the facility, but she still lives under the state's oppression. Fyodor Bondarchuk, a prolific actor, director and producer himself, delivers a more nuanced performance than his role would normally allow--compare him to Vincent D’Onofrio in Jurassic World (2015).

Abramenko shows the creature in a way that anthropomorphizes and leaves us unnerved. He uses sparse visuals to create tension, but also shows us the carnage that a horror audience expects. For a low budget movie employing a lot of CGI (2.6 million dollars US), the effects deliver and the rendering is seamless.

Despite being extremely derivative, Sputnik is a solid creature feature that reflects American cinema through a different historic lens. If you wish to avoid the soul destroying films that make up the best of 2020 and want to enjoy an effective B-movie that will last in the cannon of Russian horror, may I suggest Sputnik as a winsome traveling companion.