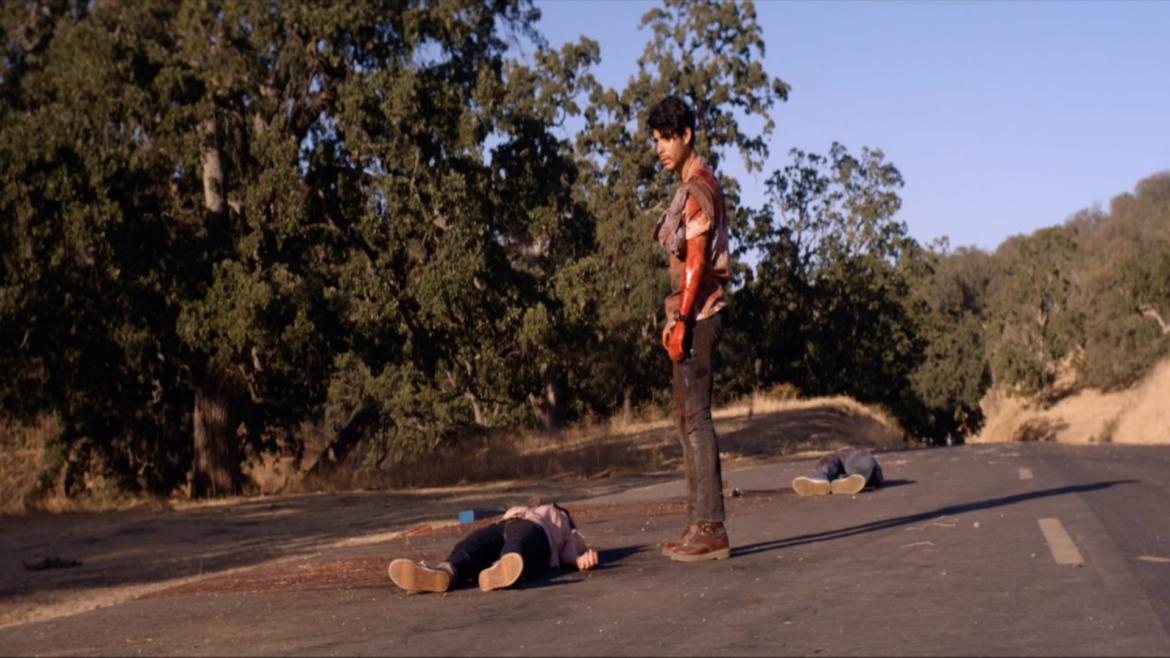 Considering the political climate right now, the public outcry for gun control and vehement push back from the pro-gun side could factor into quite the interesting time for Ryûhei Kitamura's new film, Downrange, to sneak into its Shudder release (April 26, 2018). Random acts of senseless gun violence are a hotly contested topic right now due to the intense and opinionated voices on both sides of the gun conversation. I suppose it's fitting for Kitamura's film to be little more than a 90 minute vicious portrayal of random gun violence in a single location.

Downrange does not contain a modicum of compassion--how little, you ask? We'll get there. Seconds into the film, a car full of college kids befalls a blown tire (wonder how that happened?) and after a short round of "getting to know you" we're thrust into their day long nightmare when--while changing the tire--one of the able bodied male's head is hollowed out by the silenced bullet of a skilled sniper. Three duck for shelter out of the line-of-sight on the other side of the car and one is left with only a small tree trunk as a shield from the gunfire. Stuck on a semi-deserted road with a broken-down means of protection the survivors have to find a way out of their predicament--or make peace with their role as target practice for a demented killer.

A few things that Kitamura does very well with Downrange is that 1) he does not bother with backstory or any characterization for the killer, 2) the kids have just enough characterization to make watching them die at least kind of hard to watch, and 3) he introduces a surprising amount of hurdles to what could have easily been a short to justify this being a full-length feature. Like all our favorite baddies, we know very little about them. It's what makes their killing spree so chilling. The gunman in Downrange dispatches people without flinching--and lets just say age ain't no thang either.

In fact, it's the killer's persistence and indiscriminate bloodshed that strips this movie of any sense of finesse. The inexperienced cast, while inspired, tends to make the lack of deep characterization more of a chore than it might have with an actor used to making the most out of very little. It takes time for us to realize just how little the dude with an itchy trigger finger cares about human life and when certain character revelations come to light, the killing becomes all the more dark and depressing.

Downrange is a mean spirited bloodbath whose characters are little more than soft and squishy sacks of gore and viscera for a madman's bullets to splatter on-screen. Even the tender moments are just manipulative traps that leads down a path which ends with your empathy curled up in fetal position in the shower. Sadistic and callous as it is Downrange is effective at what it does, but keep a close eye on anyone who says it's in regular rotation in their home.