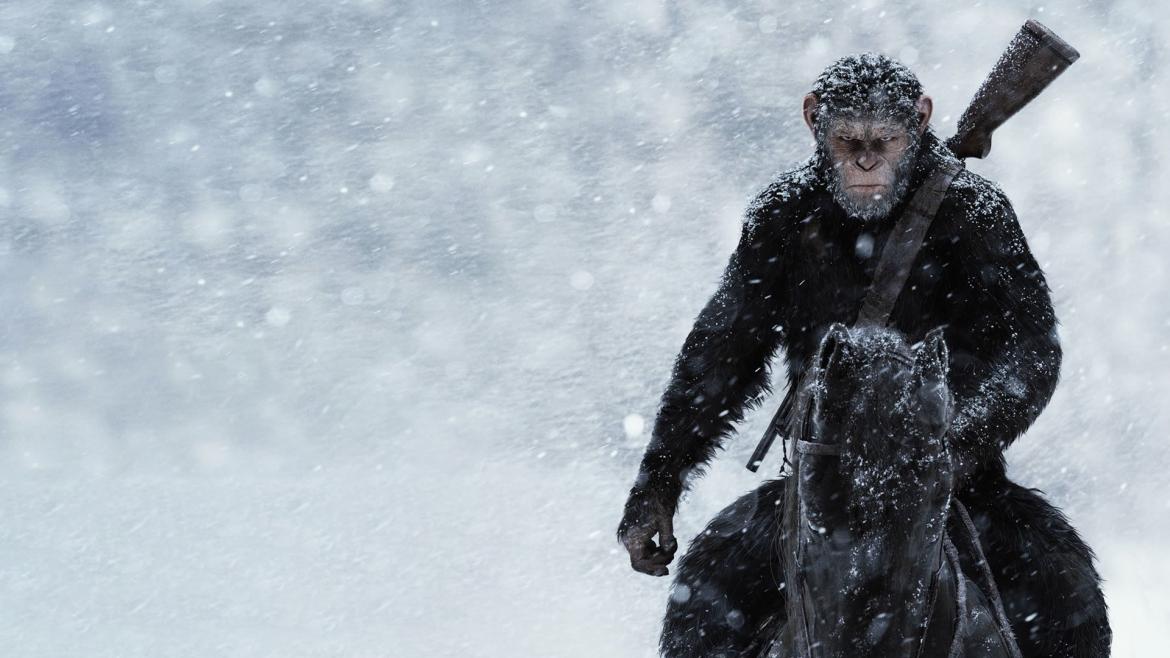 War for the Planet of the Apes (Movie Review)

Rise, Dawn and now War. Matt Reeves' vision for Caesar and his fellow primates has held tightly to biblical semblance. War for the Planet of the Apes certainly promised what appeared to be a bombastic finale for the trilogy, but is less of a war film and more a tale of exodus. Plus, we have certainly come a long way since Brian Cox's monkey jail.

True. Exodus of the Planet of the Apes doesn't sound nearly as cool, but it certainly doesn't negatively affect the film Reeves has delivered. The crawl of text that opens the film--reminiscent as a tool used by another notable 'trilogy'--details what has transpired prior to the events of War. Caesar and his 'army' of apes have been trying desperately to keep to themselves, but find themselves relentlessly hunted and under siege by human soldiers seeking to wipe them out. Word of a stretch of land that could potentially keep them out of human reach gives them hope, but Caesar then finds himself blinded by a quest for revenge against a sadistic Colonel (Woody Harrelson). Get ready for the endless Woody Harrelson monkey jail references by the BGH Crew.

To this point, the series has built a world that allows for the events in War to be considered as...well, war. From the apes perspective it's less war and more survival. Their use of weapons is for protection only as the apes have zero want or need to enact violence on the humans except to protect their own. Reeves' film is almost entirely an examination of Caesar as a character--where he came from and the progression he's gone through as a leader. War finds him succumbing to his darker animal instincts and like his Dawn foe, Koba, cannot let go of a hatred that has consumed him. In spite of his darker urges Caesar embodies a beleaguered leader devoted in his love for those who believe in him. This is of course, once again, played to perfection by Andy Serkis. Again, making it hard for the Academy to deny that his work as Caesar is anything less than a work of art and of pure performance standards.

Being visually stunning was to be expected, and those already invested in Caesar's journey will get everything they deserve and have waited for. Still, War might be the weakest film in the three film set. Reeves rarely skips a beat emotionally, but this time around the film's more powerful moments are often hastily earned. Opportunists are missed, big moments occur off-screen, while others are chaotically framed, making the information unclear at times. Other moments feel transparently manipulative as certain relationships have no time to blossom before they are then unraveled a scene later, making the plotting come off as rushed and messy.

Dawn thrived on the contentious and engrossing clash of ideals between Caesar and Koba. There was tragedy in the way their friendship disintegrated. War is sorely missing a fire as controlled and chaotic as that one at its core. Harrelson, provides a hardened enough foe to drive the tension of the ape struggle, but doesn't quite give the overall plot much of a driving force outside of Caesar's singular focus for revenge. Furthermore, the film might be the least deserving of the blockbuster tag--not that that is an inherent flaw. Still, the pacing often feels as battle worn as our primate hero and as such the fireworks are saved for a climactic battle that, in spite if its visual flair, under whelms when compared to a similar battle that transpired in Dawn--or the sweeping thrill of the apes' escape in Rise.

Most of what's "wrong" with War could be chalked up as nothing more than nitpicks. Direction is as strong as ever, the writing is sharp and the performances are impeccable. Newcomers to the series like Nova (Amiah Miller) and Bad Ape (Steve Zahn) provide a breath of fresh air--particularly Bad Ape who handily injects much needed humor into what was otherwise leaning heartily on the grim side.

War for the Planet of the Apes confidently crosses the finish line, albeit with more of a steady jog than a full on sprint. Being the series' weakest entry does not in and of itself insist that it is a bad flick--quite the contrary. Reeves' curtain call falls just short of being as finely tuned as it's predecessors. Stumbles aside, fans will absolutely not leave disappointed and should consider themselves fortunate to have witnessed one of the greatest modern trilogies unfold.

Movies Like War for the Planet of the Apes