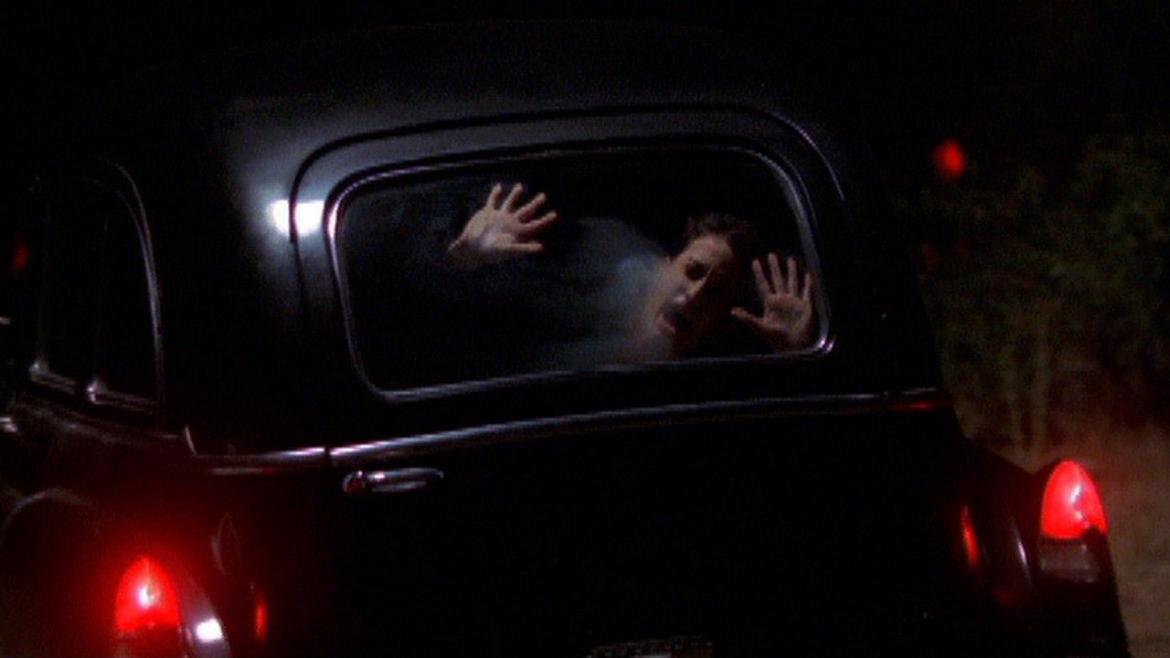 There are few things more terrifying than a holiday trip to visit your entire extended family and/or your in-laws, unless of course you’re the Harrington family. Frank and Laura Harrington pack up the car with their two children, Richard and Marion, and Marion’s boyfriend Brad, think they’re in for the same commute to grandma’s house that they’ve taken for the last twenty years until, in an attempt to battle the monotony and perhaps delay their inevitable arrival, Frank decides to take a detour.

The plot line starts out in the manner of many good ghostly road trip legends. The family picks up the mysterious (and more than a little cliche) woman in white who appears to be in shock. As this is before the age of cellular telephone proliferation, the family turns around in search of what they hope is a ranger station that might have a phone. It becomes immediately clear that the Harringtons has no idea what kind of danger they’re in when they oust their daughter from the car to make room for the stranger and let her walk down the deserted back road alone, at night, to meet them there. People start disappearing and then reappearing as mangled corpses on the road, a mysterious black car seems to be stalking them, and they can’t seem to find a town or another car no matter how hard they try.

Dead End is commonly billed as a horror comedy, and with horror favorites like Ray Wise and Lin Shaye playing the parents, it isn’t hard to see why. Upon viewing the movie, however, it is unclear how much of the comedy is intentional and how much just comes from the absurdity of the cast and the campiness that comes along with a low-budget indie movie out of the early 2000’s. Let’s be clear, this movie is certainly fun to watch, how could it not be with Shaye and Wise playing increasingly exaggerated caricatures of their genre personas? Once you see a completely delusional Lin Shaye pleasure herself by rubbing her exposed cerebral cortex you will never be able to watch the Insidious movies the same way, I’ll tell you that much right now.

The film’s small budget may have been a bit of a hindrance, particularly when it came to the practical effects and gore. Particularly because there was almost none of both. In my experience, movies like this seem to do better when we get at least a passing glance of the absurdly mangled corpses, and Dead End does a pretty thorough job of ensuring that we see just about nothing. Seeing the characters react to body after body does start to wear thin, however as the film goes on and I wonder if the silly camp factor might not have been elevated by just a little more blood and goop.

The whole package is tied together by a fairly solid plot and an interesting twist, which are probably the saving graces of this movie. The story really hits the sweet spot between not engaging us enough to look for the holes, but keeping us interested in the characters. Overall, this movie is a perfect candidate for a rainy day streaming option. And on your next road trip remember, don’t pick up hitchhikers and thank God for Google Maps.