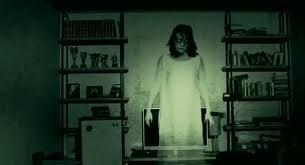 Seriously, while there are a few things to like about “Apartment 143” (also known by the Spanish title “Emergo”), it seems like half of its 80-minute running time is spent explaining the infra-red cameras or laser beams or spectrometer whoozie whatsits they’re using to track a ghost inside the titular apartment. I get it, the filmmakers did their technical research. Now how about surrounding that know-how with a decent movie?

The ghost hunters in question are called by Alan White (played by Kai Lennox), recently widowed and experiencing some shaking and rattling noises in his apartment. He wonders if the ghost could be his dead wife, trying to send him some message from beyond. White has two children—young Benny (played by Damian Roman) who hints that he still sees his mother and spends most of the movie asking “what’s that?” And then there’s teenage Caitlin (played by Gia Mantegna) who carries a big chip on her shoulder and seems to hold her father responsible for their mother’s death.

The team of ghost hunters (played by Michael O’Keefe, Fiona Glascott, and Rick Gonzalez) set up their cameras and equipment around the apartment, and they watch. I won’t spend a lot of time describing their characters here because there frankly isn’t a lot to describe. One’s a doctor, one’s a technical whiz, and one… well, she has a British accent and likes to take pictures. That’s about as much as we’re given.

Some scare scenes follow, a couple of which are quite effective, but there simply aren’t enough of them. And in between are all those minutes of exposition that I wish director Carles Torrens and screenwriter Rodrigo Cortes had filled with backstory and plot instead of discussions of gadgetry. This becomes especially problematic in the film’s third act, when plotlines are left hanging and seemingly nothing gets wrapped up. Take Caitlin’s hatred for her father. Does she know something about him that he’s not telling? The film hints at secrets in the family but doesn’t link anything together very well.
Most of the acting in “Apartment 143” is mediocre, probably because they weren’t really given a lot to work with in the way of character development.

Two of the performances must be singled out, however. Michael O’Keefe (he of “Caddyshack” fame) truly mails in his performance. He doesn’t seem to understand his character at all, and spends most of his time either lecturing everyone around him or yelling “keep rolling!” On the other side of the spectrum is Lennox as the grieving widower, whose performance is quite strong, and a scene near the end with him confessing some of his past actions was one of the bright spots of the film.

Would it surprise you if I said they see some activities that are… “paranormal?” Yes, in case you didn’t notice already, “Apartment 143” borrows liberally from “Paranormal Activity,” right down to the shots of people sleeping while things happen around them. The movie also takes pieces from “Insidious” (you’ll have to trust me on this one, to explain the connection too much would get into spoiler territory). I wouldn’t mind if “Apartment 143” borrowed a few things from these movies , but this is an example of a film that lacks any originality at all. Despite a couple scare scenes, there’s not much reason to check this one out.