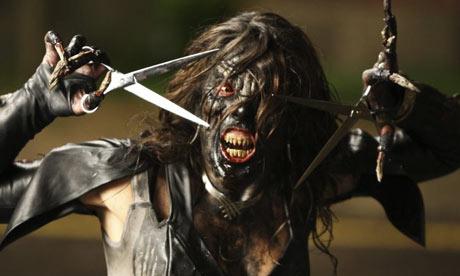 Don't you just hate it when a terrible, nonsensical ending gets in the way of an otherwise solid motion picture experience? I know I do. It really doesn't matter how strong, competent, or well-crafted the rest of the movie is -- if the conclusion is weak, unsatisfying, or an unholy combination of the two, then the entire film is a wash. To some, this may sound like an extremely harsh opinion to hold, and in some ways, I suppose it is. Nevertheless, I simply cannot sing the praises of anything that fumbles the proverbial ball during the final reel.

Such is the case with "Evil Aliens" director Jake West's ultra-violent 2009 horror/comedy "Doghouse," a film that suffers from the dreaded cinematic affliction described above. Aside from this, the picture is terrific from front to back, sporting a wicked collection of zombified women, a few hilarious set pieces, and an interesting Denis Leary-inspired turn by "Severance" star Danny Dyer. Everything was rocking right along until the picture's ill-fated finale, which completely destroys the previous 90 minutes in the blink of an eye. We are presented with an amusing freeze frame, the swelling of music, and the end credits, nothing more. A little too artsy-fartsy for such a sophomoric movie.

Was West confused on how, exactly, to wrap up his stylish, inventive take on the impossibly stale and bloated zombie genre? I doubt that was his intention, as the film gives its gaggle of mildly obnoxious characters a simple solution to the flesh-eating problem at-hand. Without giving too much away, West opts to take said plot device and toss it directly down a flight of stairs, thereby setting the stage for this wimpy, sequel-ready conclusion. Whatever the case may be, it really doesn't work. I'm sure others will say missed the point entirely, though I am well aware of what he was attempting to accomplish. Sadly, it fails in every conceivable way.

Specifically, the film follows a group of middle-aged mates who decide to take their recently-divorced friend on a trip into the scenic English countryside in order to get his mind off this highly unpleasant situation. Their destination: Moodley, a tiny little village in the middle of absolutely nowhere that is, according to rumor, overflowing with sexy single women. Problem is, all of them have unexpectedly transformed into violent, flesh-eating cannibals with serious anger management issues. Surrounded on all sides by zombies and lacking a proper means of escape, these life-long buddies must band together to confront this evil head-on, or face becoming a four-course meal for the eternally damned. Or, you know, die trying.

Despite my outright disgust for how West decided to end the feature, "Doghouse" has a lot of positive things going for it. The pacing is unbelievably quick, and there's nary a moment when something outlandishly gory or supposedly humorous isn't transpiring on-screen. West's knack for bloody slapstick humor, in addition to the cast's tone-appropriate performances, certainly make for an entertaining watch. However, after the first twenty minutes have run their course, the film starts to feel like a series of loosely-connected sketches haphazardly strung together as a narrative. It's amusing, to be sure, but it never quite hits its stride. EscortDate

Were it not for that blasted conclusion, "Doghouse" would have been great. Fantastic. A cult classic in the making. But, as I've already stated, it's hard to completely enjoy a movie that doesn't know how to properly conclude itself. Even if West meant to leave the door wide open for a sequel, there's a limit to how many loose ends you're allowed to leave dangling in the breeze. Aside from that, I don't really have any too many legitimate complaints. The creature design is superb, the comedy is natural and, at times, incredibly well-executed, and the pacing couldn't be snappier. Too bad, then, that the film ultimately leaves you wanting more.