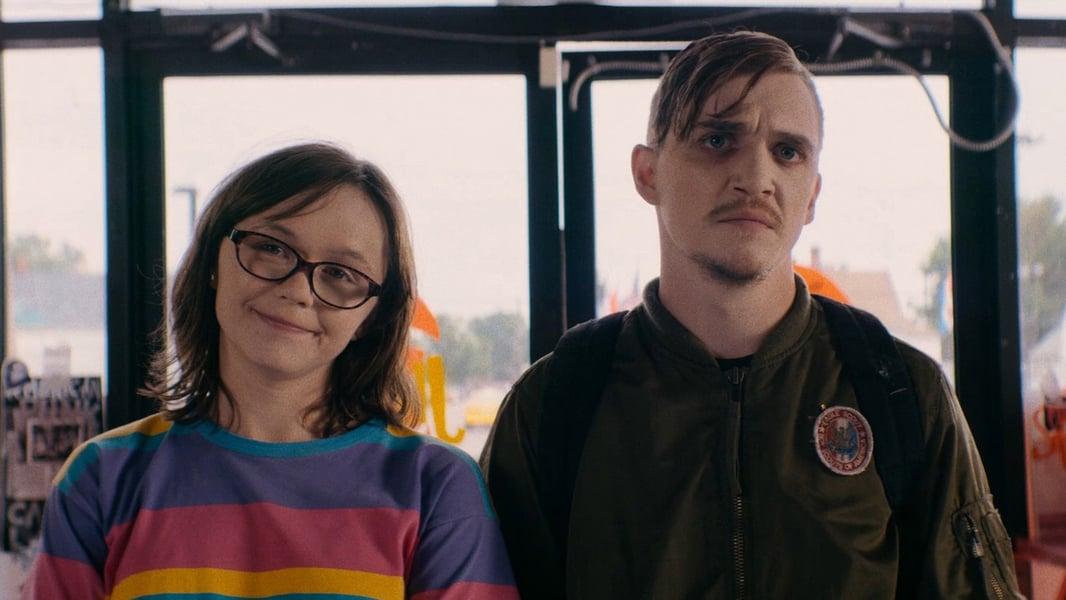 “F*** em all, but us,” sings Emily Skeggs as Patty in Adam Rehmeier’s feature film debut, Dinner in America. This is a movie that couldn’t have a more unflinching punk attitude unless angst ridden graffiti materialized on the walls of every room it’s viewed while fires spontaneously erupt on all the consumerist clutter in spitting distance. Abrasive? You bet your ass it is. Infectious? Also a resounding, yes! But, you have to work a bit to puncture this film’s gritty, toughened skin. The reward is worth the effort.

Simon (Kyle Gallner) is a rough edged punk rocker constantly on the run from the cops due to his love of setting stuff on fire and generally causing a disturbance wherever he roams. Patty (Emily Skeggs) is a soft spoken, awkward type who only ever really lets go of herself when she’s in her room rocking out to her favorite punk jams and sending lude pics to John Q, the anonymous lead singer of her favorite band -- who is actually Simon. A chance encounter brings Simon and Patty together as he looks for a place to lay low. Over the course of their time together Simon teaches Patty to accept who she is and to truly embrace the punk rock attitude that’s lurking within her.

Decidedly not horror, there remains a dangerous aura within every frame of Dinner In America. We don’t necessarily fear that these people are destined to commit or receive some tragedy. Rather, Simon’s abrasive behavior imposes an intense will within Rehmeier’s film. A simple act such as Simon briskly walking across a parking lot has a ferocious energy to it, largely imparted in Gallner’s committed and quite frankly brilliant performance. His every word and movement is unpredictable and at times hard to interpret given the rampant angst in his tone and body language.

Within Dinner in America is a soft heart, but one that’s laced in barbed wire. So much of its composition is catered to rub people the wrong way. The film embodies the punk rock aesthetic Rehmeier is going for. The first half hour will truly test one's ability to go for the ride. Simon, as a character alone, is A LOT to take in. In stark contrast is Patty who essentially wouldn’t hurt a fly but has an undiscovered aggressiveness lying dormant inside her. There’s tenderness under the surface in the portrayal of Simon and the budding romance between the pair.

The film has a unique way of winning you over largely due to Rehmeier’s script. The plot here is simple but the writing plays to the energy of the performers. The film is unburdened with trying to be smarter than its audience, instead relying on a “no f***s given” attitude and blunt statements that hit like sledgehammers out of Gallner’s mouth; every f-bomb and politically incorrect slur landing like a haymaker to the jaw. Where the contrasting personalities of Simon and Patty really come to a head are in the original song the pair compose in Simon’s parent’s basement. Rehmeier perfectly blends an anarchic tone with a more sweet yet still punk vibe. The song perfectly captures the movie's overall intentions and tames its unhinged characteristics. Through all of it is a feisty and zany sense of humor that accompanies the film’s caustic perspective on American life.

A movie this rude, crude and aggressively indifferent to pleasing a wider audience should not work as well as it does. An outstanding slice of rebellious humor and romance, Dinner in America is a brash condemnation of posh and cozy suburban existence, wearing its punk attitude loud and proud. Come for Gallner’s outrageously colorful performance, but stay for the unexpected “love on the fringes” romance and “f*** you” attitude fitting for a movie playing at a genre film festival.