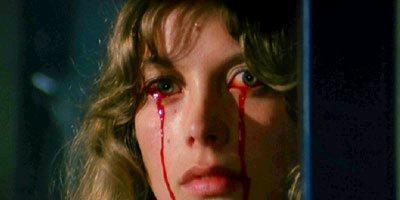 Growing up, I had a really close friend who would scour the then emerging internet for lists of movies and then hunt them down relentlessly for our viewing. There was always one film that eluded us however. That was Lucio Fulci’s 1980 film, “City of the Living Dead” (also known as “The Gates of Hell” in some home video releases). What drew us to the it was the description of the insanely over the top gore, women vomiting up their internal organs, people’s brains being ripped out the back of their skulls, men having their heads run through with power drills... this movie sounded insane. Well, thanks to the glories of Netflix’s Instant Stream, I’ve finally gotten a hold of this gem. The question is, was it worth the wait?

Put succinctly, kind of. While this film is totally worthy of the reputation it has and has many very strong aspects, there’s something missing that prevents the film from going down as an all-time classic. Films can either succeed as completely non-sensical, absurdist works of art (“Eraserhead”) otherwise they need to have coherent narratives. Unfortunately, “City of the Living Dead” tries to live in the realm between the two options. Ultimately, this is the major downfall of the film, which is a shame, because with a little tightening it could have been one of the all-time classics, instead of a flawed near-masterpiece.

The plot owes a lot to the works of H.P. Lovecraft, specifically “The Dunwich Horror” . The film starts with a Priest committing suicide in a cemetery while a young clairvoyant named Mary watches on. After the suicide, Mary has visions of the dead rising, and dies of fright. Her mysterious death draws the attention of a New York City reporter named Peter who later learns that this whole situation was described in the ancient Book of Enoch. According to the book, the Priest’s suicide has opened the Gates of Hell in a small town called Dunwich, and if they aren’t closed soon, the dead will walk the earth and mankind will be doomed. Meanwhile, things in Dunwich aren’t looking too good. There’s a seemingly never ending windstorm constantly pelting the town with dirt and sand, windows are randomly breaking with no apparent cause and, more importantly, there’s a zombie Priest going around causing people to vomit up their innards, ripping holes in their skulls with it’s bare hands and shoving worm filled grave dirt down their throats.

This is where “City of the Living Dead” really excels, the atmosphere it creates for the town of Dunwich is incredible. There’s constantly wind whipping at the residents which makes the town feel as if it’s not on Earth. Like most Italian horror films, the visuals are unparalleled with unusually bright and vivid reds and purples lighting up most scenes. And the music, my God the music. The soundtrack of this film is one of the greatest I’ve ever heard. If you’ve seen other Italian horror films, you can correctly guess that it’s synth-heavy, but, combined with the unnatural lighting, it really makes Dunwich come across as a town being ravaged by something other-worldly. Equal parts catchy and ominous, the film’s soundtrack is truly incredible. If you’re an aspiring film-maker, you really owe it to yourself to watch this movie and learn how to create atmosphere.

Also to the film’s credit, it manages to treat the concept of a zombie in a creative, innovative way. The zombies in this film essentially take the place of one of Lovecraft’s unspeakable terrors. The zombies in this film don’t just shamble along and eat brains. They teleport around and play mind-games with their victims. They strike fear into their hearts and drive them mad. The zombified Priest will unexpectedly drop down from the rafters in the same noose he kills himself with and will watch his victims from afar, hanging in a tree and blowing in the breeze. It’s creepy and it’s a breath of fresh air.

So if the film is expertly made and is an innovative take on a well tread, pretty stale genre, what’s preventing it from being a true classic? Unfortunately, the plot falls short of the rest of the film. It’s especially maddening because everything the plot needs is there, but the film just never connects the dots and ties the story together. Viewers of the film that have read “The Dunwich Horror” will notice that the character of Bob’s backstory is essentially the backstory of the creature in the original story. Naturally, they’ll expect his character to be important and to be the one tying the story together.

Instead, he turns out to be just an expendable character that is ultimately pointless (though his death scene is one of the most memorable scenes in the film). Dunwich is established as being founded by Salem witch-burners. Given the relgious elements, you’d expect that this fact would somehow be related to what’s happening. Well, it’s not. Again, it’s pretty inconsequential to the story. And then there’s the Priest. Did he know that by killing himself he would open the Gates of Hell? Is he a malicious villain or was it just really unfortunate that this all happened? What’s the Book of Enoch? What happened to it? Again, the film has everything it needs to tie the story together. Make the character of Bob into something similar to the titular Dunwich Horror, involve the witch burners and flesh out the Priest, and then you have a story worthy of the rest of the film. Instead, you’re left with a disjointed story that never coalesces, ultimately never really makes sense and drags. It’s a bummer.

And then there’s the ending. I love good, ambiguous endings that spur discussion. The only discussion this ending will spur is “what the fuck just happened?”. It’s like Fulci just ran out of film, wanted a downer ending and said “fuck it”. It’s bad. It’s really fucking bad.

Ultimately, “City of the Living Dead” is a somewhat frustrating movie. In many ways, it’s excellent. However, the story never lives up to the atmosphere or creativity. As it stands, it almost feels un-finished. By simply cutting a few bits here and there and fleshing out the story a bit, you’d have a film that earns a solid 10/10 and a must-see recommendation. However, that’s unfortunately not the case. If you’re a fan of Italian horror films, an aspiring director or enjoy films as works of arts, you absolutely must watch this film. Otherwise, I’d still recommend it, but just warn you that the whole isn’t greater than the sum of it’s parts.