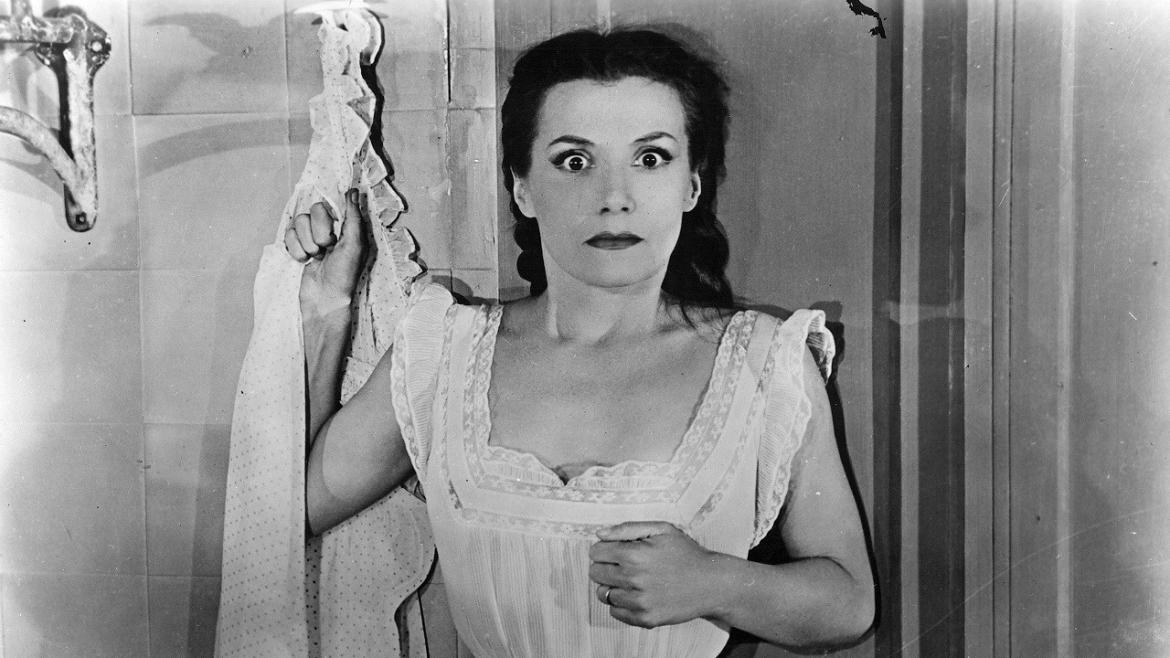 When I trace back my journey as a horror fan, I most often credit my introduction to the genre to John Carpenter’s classic 1978 film, Halloween, which I watched at, fittingly, a Halloween party during me freshman year of highschool. The film that I often forget to include, however, is one that I saw one year earlier, that has stuck with me even more fiercely. The movie is Henri-George Cluzot’s 1955 Diabolique, which my eighth grade French teacher played for us in class. How she got away with this still escapes me.

Diabolique—not to be confused with its less than stellar 1996 remake starring Sharon Stone—chronicles the deception of two women as they murder the man who happens to be their husband and lover, respectfully. Christina (the wife) and Nicole (the mistress) have had enough of Monsieur Delassalle’s infidelities and abuses, and so they decide to knock him off and stage it as some kind of an accident. After dumping his drowned body in the murky pool on the property of the boarding school where they all live and work, all the women have to do is play it cool and wait for his body to be discovered. They eventually create a scenario in which the pool has to be drained, but the body is nowhere to be found.

Diabolique is just about as perfect and exquisite a film as you could hope to find. Shot in black and white, the director uses shadow and light to great effect throughout the film, creating just enough darkness that we are never quite sure where someone or something may be hiding. A scene in the film’s final act finds Christina lurking through darkened hallways in the school at night, in fear that her not-so-dead husband may be nearby. The lack of a musical score, except over the credits, enhances the tension that slowly builds throughout the two hour runtime.

Clouzot’s use of symbolism, likewise, cannot be overlooked. Firstly, the blocking of several scenes is such that we see Christina only through her reflection in a mirror. The repeated use of these shots force the audience to consider the way that Christina sees herself in light of what she’s done. Of the two women, she is clearly struggling the most, and the mirrors seem to suggest that with each passing day she becomes less recognizable to herself. Another incredibly effective symbol is the water in the film. Water can often symbolize safety, cleansing, and freedom, and it certainly appears to be all of those things when the women drown Christina’s husband by submerging him in a bathtub. The moment his lungs fill with water, they are safe. But once they drop him in the dirty, cloudy pool and can no longer see his body, the water seems to hide something dark and sinister. Christina can’t stop staring at the pool, while at recess, while teaching her class, so overcome by what might emerge from it.

Many have cited this film as a direct influence on Alfred Hitchcock’s Psycho, which came out five years later, and it isn’t hard to see why. The pacing of the films are directly parallel, with a big kill happening within the first third, and both of them in bathrooms. In both movies the audience likely comes out of the kill scene thinking, “Now what?” only to be lead through a winding story. Placing these traumatic scenes so early shatter expectations for the remainder of the film and serve to really disorient the viewers. Diabolique also presents us with two very distinct femmes fatales, characters who were of course central to many of Hitchcock’s later works. In fact, it is rumored that Hitchcock tried to buy the rights to the original story this film was originally based on, but was beat to the punch by Clouzot.

While this movie is not nearly as widely known as Psycho, it should be; not simply for the performances and the tension, but because it contains one of the most chilling and memorable scenes ever committed to film. I would tell you more, but the film’s end credits specifically contain a message demanding that no spoilers be given (the first “anti-spoiler warning of its kind). If you have not seen this movie, do yourself a favor and find a copy of the newly remastered Criterion Collection copy and try to watch it alone in the dark.