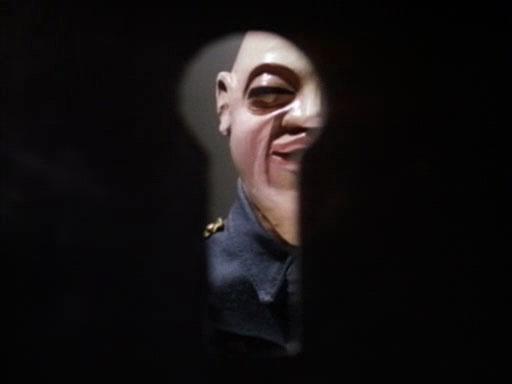 Growing up in the home video era, there are certain VHS boxes that are vividly emblazoned in my childhood memories. The weird Goatse mouth/skull thing that was the “Dead Alive” box. The creepy smiling monster that adorned “Critters”. The knife stuck into Jason’s hockey mask that was on the cover of “Friday the 13th”: The Final Chapter”. When I think of VHS horror, these are the images that come to mind, clear as day. Over the years I’ve been able to track down all these films I never saw as a kid and found out that, unfortunately, most of them aren’t as great as the lasting image I have of their VHS box (except “Dead Alive”, that lived up to it). However, there’s always been one of these films that eluded me over the years, the 1989 direct to video release “Puppet Master”.

Maybe the “Puppet Master” films stand out so vividly in my mind because there’s been so many of them. No matter what video store I went to as a kid, there was a “Puppet Master” box somewhere. At last count, they’re up to ten films but up until a few days ago the only one I’ve seen was the awful, Syfy-produced “Puppet Master vs. Demonic Toys”, which, as you can imagine being both a Syfy Original and a “versus” film, was an irredeemable turd. Luckily for us all however, the original “Puppet Master” is very much not a turd.

“Puppet Master”’s biggest strength is easily the band of murderous puppets. It’s one of those rare horror films that introduces an antagonist (or in this case, antagonists) that are so original and filled with so much character and personality that you immediately want to see them again. The first puppet you see in the film alone, a little hook and knife welding dude with a fedora named Blade, has more personality than most of the creatures or serial killers in whatever horror film is playing at your local theater right now. Throw in other supporting puppets like the pinheaded strongman puppet appropriately named Pinhead, a puppet with a rotating drill head that looks like something straight out of an old-school “Mega Man” game and a bizarrely sexual puppet that can vomit up enormous leeches, and you’ve got yourself an iconic band of villains.

While the killer doll trope is pretty well worn, “Puppet Master” manages to distance itself from the dregs of this genre like “Black Devil Doll” (seriously, the most awkward film-going experience in my life) by having an fairly absurd, original plot in which to place the dolls. The film revolves around a group of psychics that are gathering at a hotel for the funeral of their fellow psychic Gallagher (sadly not the comedian). What makes this so bizarre, outside of the fact that everyone in this film is a psychic, is how these characters are portrayed. While we’re led to believe that they do actually have psychic powers, they’re all portrayed as complete and total douches and borderline inept fuck-ups. We’re introduced to our hero, Alex, as he’s having strange dreams of a man holding a woman hostage and his stomach spontaneously bleeding. While portrayed as the least inept of the group, he’s got a mullet so ridiculous he looks like the lost Doobie Brother. We’re then introduced to Dana, who’s in the midst of unsuccessfully trying some “Crossing Over with John Edwards” style cold-reading and who later parades around the hotel waving a feather aligning her chakras or some new-agey bullshit like that. Finally, there’s Carissa and Frank, who rocks the bald dude with a pony-tail look, who seemingly use their psychic powers only to masturbate, have weird psychic sex and play pranks on each other, which makes me wonder if they weren’t both secretly 13 year old boys.

Needless to say, it’s fun to watch the puppets off these people.

We later learn that Gallagher is actually alive and learned about these puppets and the hotel through his studies of the Puppet Master. Through these studies, he learned how to cheat death and elaborately arranged to get everyone together in the hotel so he could kill them off using the puppets. Why Gallagher choose to get his revenge by killing everyone with murderous puppets and not by shitting in their mailbox like us normal people is beyond me, but hey, it’s entertaining to watch.

Wait, what do you mean it’s not normal to do that? What?

Regardless, as fun as “Puppet Master” can be at times, there’s really not much to it. While I’m obviously not expecting a film about killer puppets to be in the same league as something Kubrick would do or anything, there’s just not much to it other than the puppets. Replace Blade and the gang with anything else and this would have been a totally forgettable film about some shitty psychics. While the film is a lot of fun while the puppets are unleashing carnage, the in between scenes are kind of meandering and dull. The psychics themselves are so absurd that they do contribute the occasional scene of hilarity (the sex-crazy couple responsible for most of those), but generally this film is a film of extremes. Extremely entertaining scenes with the puppets, surrounded by extremely forgettable scenes without them.

It’s easy to see why “Puppet Master” has spawned so many sequels. Unlike a lot of franchises that become a franchise simply because the first film was successful at the box office (“Paranormal Activity” anyone?), “Puppet Master” actually introduces characters and a world that viewers will want to revisit again. Despite finding this movie to be somewhat flawed, I still want to go through and check out a few more of the sequels to see some more crazy puppet violence and to see what other puppets were hiding in that trunk in the beginning. While it’s not a perfect film by any means, “Puppet Master” has a lot of character and personality to it and with a lot of the dreck passing as horror these days, that’s a whole lot more than most films can say.