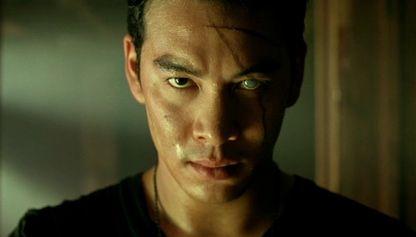 “Demon Warriors” or “Opapatika” may be the most elaborate suicide prevention film ever made. It also is easily the most entertaining in that category as well. All apologies to those big “Permanent Record” fans out there, but a young gormless Keanu just isn’t as much fun as tormented Thai demons popping the heads off of soldiers. On the other hand, “Permanent Record” doesn’t carry forth a clunky message of faith, nor does it ever risk losing the viewer in the coils of its allegory.

“Demon Warriors” tells the story of 4 ‘Opapatika’ or super powered demons in human form who acquired their extraordinary potency by killing themselves in the human world. They now inhabit a purgatorial plain where they use their powers to try and attain some sense of relief, vengeance or solace. The newest Opapatika is named Techit and he has been recruited in the netherworld by Master Sadok with the promise of power and purpose to follow. Sadok and his human sidekick are trying to subdue the raging demons through inexhaustible soldiers and fire power.

The demons themselves are not only being pursued by Sadok, they are being recruited by a mysterious woman who seems to promise relief from their suffering and chaotic lives. The problem for this mysterious siren is that it seems an impossible task to get the Opapatika to stop fighting and trust long enough to galvanize them as a group. Eventually through a series of seductions and confrontations the demons unite but much is not as it seems and the final war between the forces of this median world is a bloodbath of revelations.

“Demon Warriors” is a well-crafted, nicely under-milled piece of Asian gore action. The initial fight sequence is far and away the most impressive of the bunch. But all of the action scenes include ample head-popping, spraying arteries, and Tsui Hark high wire acts. The pacing is well calculated for the most part. The balance between the demons lamentations of life lost, the masterminding of Sadok, and the carnage-rich confrontations only occasionally devolves into torpor.

Perhaps the most effective combination in the film is that of the high-grain film stock and the production design. The demons’ urban hell is awash in ruin and wreckage, soaked in runoff and dwarfed by stained stone edifices with jagged windows and lifeless rooms. The interiors are equally impressive with probing roots defacing Victorian sitting rooms and long bleak hallways disappearing into haze.

Christian Horror films have long been a turn off for me, primarily because they feature judgment above entertainment and the dignity of the audience. I have to admit that this is my first experience with a sermonizing Buddhist movie. Perhaps it’s pure hypocrisy, or a case of the devil you DON’T know, or just because “Demon Warriors” is much more entertaining than say “House” (2008) but I was substantially less offended by this film than some of the jump-for-Jesus scare fests I have seen. This is not to say that the black-jack of moral affectation that they bludgeon the audience with in the last 30 seconds of the film isn’t insulting. It just doesn’t peeve me in quite the same way. Perhaps if I had watched the dubbed version the punch would have been a little more infuriating but with subtitles I was able to slip the jab and admire a good amount of the film. На нашем сайте https://vulcan-777-slots.com/ можно поиграть в игровые автоматы.

Of greater annoyance to me than the moralizing or perhaps it is the biggest casualty of that moralizing is the movie’s story structure. There is so much happening simultaneous to the spiritual overtones that the viewer is left holding questions and thread ends for far too long. Many of the ends are tied together by the climax but some important realities of the film’s universe seem more than a little unclear. Most glaring amongst these unanswered questions is that of the essence of the Opapatika’s immortality, which is apparently revocable… and applies to all of them but not in the same ways. All this would be fine if it were explained more clearly with less philosophical chirping. Instead the film chooses to ramp up its homiletic master messages and finish the viewer off with a quote about the sin of suicide.

“Demon Warriors”/“Opapatika” is the grandest “don’t snuff it” production of all time. The film doesn’t kill itself by over preaching, but it could have been much better if they had toned down the suicide disquisition and written a tighter story. That said, if you are looking for a lot of blood, fury and great production design to fill 2 hours, you could do a lot worse.