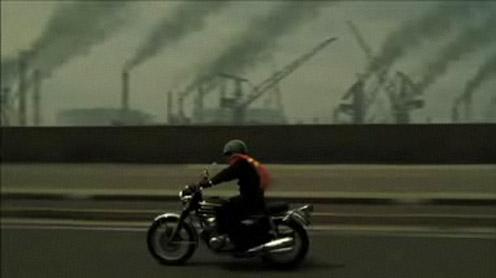 When I was a kid, I wanted to be an archaeologist so badly. And why wouldn’t I? I mean, look at Indiana Jones, that dude kicked ass. And Alan Grant in “Jurassic Park”? Yeah, dude was pretty awesome (though in retrospect, Jeff Goldblum’s character is way more awesome). Of course, I now know that archaeologists don’t fight Nazis or get invited to Dinosaur amusement parks. Instead, they just get dysentery in some crummy town in the middle of nowhere and hang out in dusty museum basements with no air conditioning. It kind of sucks. What does this have to do with a movie about a giant space slug destroying Tokyo? Absolutely nothing. But you know what? “Demeking: The Sea Monster” has nothing at all to do with a giant space slug destroying Tokyo. But it does have a whole hell of a lot to do with finding out your childhood dreams aren't quite what you thought they were.

“Demeking” is unfortunately one of those movies that can’t really be discussed without spoiling the entire thing. That said, I’ll get this out of the way now. I really liked this movie. However, it is absolutely NOT a kaiju film, nor is it really even a horror film. Stylistically, it’s heavily influenced by some of the paramounts of Japanese film (note, I didn’t saying Japanese horror film, because this isn’t a horror film), the most obvious and pervasive being Yasujiro Ozu (“Tokyo Story”, “Late Spring”, “Early Summer”). If you’ve taken any film classes, those names should sound pretty familiar to you. If you like those films, or anything by Ozu, you’ll really enjoy this film. While this film definitely isn’t on the same level as something like “Tokyo Story”, it wears it’s influence on it’s sleeve and it’s an entertaining and unique take on the typical Japanese monster film. So, before I go ahead and spoil everything, go check this film out. If you’re a creative type, or like reminiscing on your childhood and films about childhood adventures (kind of like “The Goonies”) you might also want to go and scope this one out. If you’re not yet convinced you need to see this, feel free to continue. Just be warned, I have to spoil it, and this is one of those movies that you really should go into with no knowledge of. Trust me.

Here goes! “Demeking” follows a group of children that are in an exploration group in a 1970’s Japanese port town. The group is composed of three children, and the older brother of one of the kids. This city is also home to a crazy man training daily for a fierce battle. He’s training and preparing for battle with the Demeking, an evil space monster that will comes to earth and wreck havoc, plunging the world into chaos. One day, the exploration group is exploring the crazy man’s boat on the pier (can you tell I didn’t get their names yet?), when he returns to find them there. He then proceeds to explain to them who he is and what he’s doing. But rather then spelling everything out for them, the man sends the group on a quest across town, giving them cryptic hints and maps, leading them to different locations where parts of the mystery slowly unravel.

This quest terminates at a cave cut into the side of a seaside cliff. After risking their lives to climb into the cave, the children find an enormous piece of paper locked in a chest. This paper has a huge footprint from the creature on it and a warning from the crazy man. The warning reveals that he’s actually from the future, and that he’s come back in time to kill the creature before it can destroy the world and plunge mankind into a new dark era. It’s kind of like “Terminator” only without that weird “hey future Dad, go back in time and bang my Mom for me so I can exist” thing.

With their new-found knowledge, the children return home with no idea of what to do. Unfortunately they don’t have long to plan before the Demeking arrives and destroys their quaint little port city. Along the way, the creature lays hundreds of eggs, dooming society to the prophecy foretold by the time traveler. Just when it seems like all is lost, our protagonist (seriously, spoilers ahead, I’m not kidding)...

... wakes up! It was all a dream. There’s no Demeking. Earth is safe! So everyone rejoices, right? Nope. Not all. The older brother, the leader of the exploration group, disbands the group. It’s time to grow up after all, right? All this running around and adventure stuff is for kids, isn’t it? We jump forward a few years and see the crazy man is still around, but very much not from the future. He’s living in a larger city and meeting up with his father. His father berates him about not having a job, needing to be more responsible and how he needs to grow up. He goes home and finds his roommate is dating an attractive new girl, while he remains alone and depressed. We cut back to the leader of the exploration group and find him now in High School and being bullied. However, unlike the crazy man from the future, he’s happy. He’s turning his Demeking adventure into a novel and is convinced that he’s going to win a literary prize for the work. Then, the film ends, with no resolution.

Like I said, this isn’t a horror film. Outside of the 15 minute dream sequence (which is super cheesy, awesome, and everything I was hoping it would be) it’s not really even a monster movie. Instead, “Demeking” is something unique. It’s a coming of age tale, but not the hopeful, optimistic coming of age tale we’re used to seeing. It deals with the death of childhood creativity and adventure. It shows how that transition can crush some (the time traveller) yet inspire others (the older brother). It’s a deep, layered film. While it is a tad bit on the slow side, that very much comes with the territory with Japanese cinema. And despite being slow, it never feels long or boring.

“Demeking” is a solid film, though not necessarily for everyone. It’s a slice of life movie that just happens to revolve around the story of a monster. Ultimately, what you get out of this movie is up to you. If you can get into the story and accept the fact that this isn’t a movie about a dude stomping around in a rubber suit, give it a shot. If you’re a creative type, you might actually find yourself identifying with the kids in this movie some, much like I did. It’s pretty bold to market a film as something that it’s so obviously not, but at the same time, it made for a very pleasant surprise. Don’t judge this one by the cover, there’s much more to it than it appears.