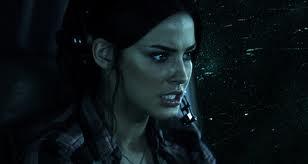 Picture this: you’re in a small plane with four other blandly attractive teenagers (for the purposes of this review you’re also a blandly attractive teenager). The plane is en route to a concert and being flown by your friend who has just received her pilot’s license because that’s a fantastic idea and what could go wrong. Suddenly the plane begins inexplicably gaining altitude and flies into a seemingly endless storm cloud. Inside the storm cloud is a giant flying octopus that looks like something a pre-teen H.P. Lovecraft would have doodled in the margins of his Social Studies homework. Sounds like the makings of an awesome horror flick, huh? It’s not. You can add “Altitude” to the ever-growing pile of horror movies with interesting premises that blow it all in the execution.

The diverse CW teen soap cast on loan to this movie includes such fascinating characters as Brunette Girl, Blonde Girl, Brunette Guy, Blonde Guy and Guy with a Mysterious Past. At least, it’s meant to be a mystery but from the get-go his not-so-mysterious past is glaringly obvious to anyone who watched the first five minutes of the movie. The acting is pretty bad across the board but it’s hard to say how much of it is bad acting and how much of the blame lies with the atrocious dialogue. Throughout the film these kids speak and react in ways that are almost, but not quite wholly unlike any living human being I’ve ever met. I was waiting for a third act “They’re all Cylons” twist before I realized that Battlestar Galactica ended a few years ago and I was just wishing I was watching that instead.

So what about the cool part of the movie, the Flying Spaghetti Monster of Doom? Sadly, the skyctopus hardly gets any screentime in which to get his fhtagn on. The creature looks pretty cool, like the Sarlacc That Ate Cloud City, but its role is actually so minor that you could probably recast it with any kind of flying monster or even just whatever kind of amorphous glowing ball the CGI studio has on sale that week. If you come into this movie expecting the kind of creature feature the film’s marketing promises, you will be sorely disappointed.

Some credit is deserved for the fact that this film takes place almost entirely on a commuter airplane set and only stars five people, but unless you grade your movies on a curve with technical difficulty factored in, that probably won’t make much of a difference. I’ll also award the film a few points for not feeling as confined and limited as a single-set film potentially could be. The camera moves around and outside the plane in a way that makes watching pretty people freak out on a small plane for 90 minutes somewhat bearable.

The final nail in the coffin is in the nature of the creature itself. Obviously I won’t tread too deep into spoiler territory here, but suffice it to say that many watchers will groan in desperation when they find out the origin of the Astro-Kraken (hey, I used up all my good names for it a couple of paragraphs ago). It’s intended to be a very EC Comics type twist, a tribute which is underscored by the fact that an EC Comics type comic fits prominently into the plot.

It’s that EC Comics vibe that ultimately is where this film went wrong. This would probably be a pretty decent entry into an anthology film or television series but at feature length the premise is too constricted and the payoff is too cheesy to be satisfying. Chop an hour out of the film (just the pretty people scenes though please - leave the monster stuff in) and it would be a lot easier to forgive the doofy ending.

Maybe it’s just sour grapes because I was hoping for “Cthulu on a Plane”, but for me this film felt like a very special Halloween episode of One Tree Hill. I’m willing to concede that some people may enjoy that sort of thing and those people (by which I mean teenage normies) might find this a nice change of pace from the parade of slasher remakes and SAW sequels that are usually marketed towards them. “Altitude” is an old-fashioned gore and nudity-free Twilight Zone-style story . If you didn’t grow up watching that show or Tales from the Crypt or any of the other anthology shows that sadly have fallen by the wayside then there might be something here for you. For the rest of us, we’ve seen it all done before, and better.