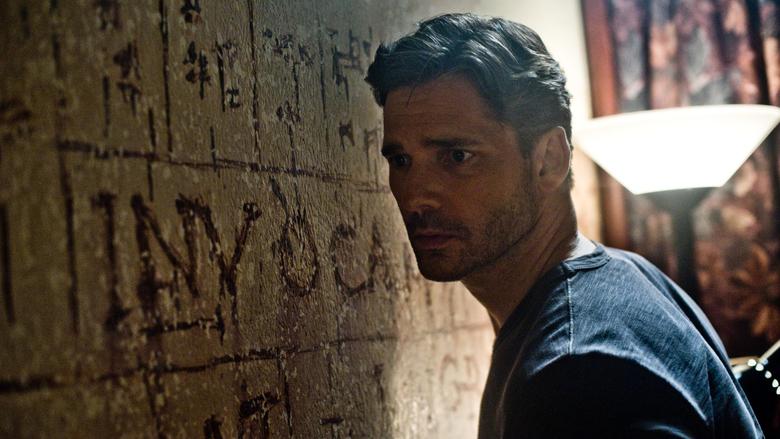 Deliver Us from Evil (Movie Review)

Possession movies have been hot over the past five years. The most prominent success stories coming from James Wan and Jason Blum with The Conjuring, Insidious parts 1 and 2, Sinister, and of course the Paranormal Activity franchise. Their success has spawned a countless amount of like-minded ghostly or demonic tales; Sinister’s director, Scott Derrickson, contributed another entry to this oeuvre with 2014’s Deliver Us from Evil.

Marketed behind the premise that the film was “inspired by the real life accounts of an NYPD sergeant”, Deliver Us from Evil begins interestingly in the desert in 2010 on a battlefield in Iraq. A small group of U.S. troops is embroiled in a conflict when a trio of the group stumbles upon a stairwell underground. Presuming the cave to be a base of the enemy, they enter unbeknownst to the demonic presence lurking within. Fast forward a few years and the story reestablishes itself in New York city following NYPD Sergeant Ralph Sarchie (Eric Bana) who has stumbled upon a string of odd cases. A wife beater who scratches relentlessly on the floor and walls in fits of rage, a deranged woman who throws her own child into a den of lions, and an ominous hooded figure who’s painting over cryptic writings throughout the city near crimes. With the help of an experienced demonologist Priest (Edgar Ramirez), Ralph must confront his own transgressions and deal with the lurking terror that’s also begun to torment his own family.

If that synopsis sounded a bit bland and derivative, it’s because the movie itself is. Derrickson is a very effective visual provocateur, and that’s on display here as well, but the core parts of this story and experience are quite rote and vanilla. The opening harkens all the way back to The Exorcist where demons from a far off land come to invade America, the incessant rain and gore effects are closely reminiscent of David Fincher’s Se7en, even some of the death sequences are cribbed from M. Night Shyamalan’s The Happening. There’re far too many similarities that bring memories of other, oftentimes better, movies to the forefront. It’s a mountain that this film is unable to climb past despite some strong supporting performances, Ramirez and Joel McHale as Sarchie’s partner most notably, and a very scary antagonist in the ominous hooded figure.

As stated prior the gore is closely reminiscent of Se7en, and that’s not always a bad thing. There is some really strong imagery that kicks the audience in the teeth from time to time. Derrickson is not shy about blood or violence throughout, and it’s to the movie’s benefit. The problem comes from his pacing between the kills and scares. The mystery of the hooded figure isn’t much of one, and the demonic puzzle being put together is generic and easily predictable. At no point is there ever any major turn in the story that surprises or stands unique. One character’s death seems to be a potential turning point, but it is promptly forgotten completely and becomes a wasted sequence.

Deliver Us from Evil is certainly not a bad film. I’d be hard pressed to say that Scott Derrickson could make a bad film these days; which should give great hope to Marvel fanboys as he’s in line to make Doctor Strange. The script is too flat and mundane, and the chances Derrickson takes are always within the visuals. For him to become one of the elite horror filmmakers he’s going to need to be given better scripts or add some more intrigue to his own.