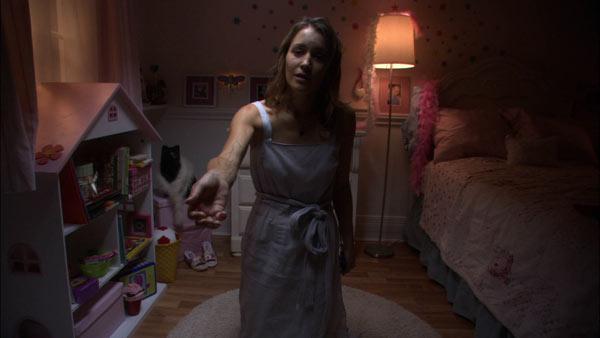 Carrying on after the events of the original “Pulse” in 2006, our story shifts focus to another family affected by the digital ghosts invading the world. Michelle wakes to find her apartment covered in ash and her daughter missing. Setting forth to try and locate her daughter she visits her Aunt and Uncle only to find out that there is something severely wrong with her Uncle. Michelle’s ex-husband Stephen fights his way back to the city to locate his daughter during the onslaught of undead digital demons. Along the way, they struggle to figure out what is real and what is of the ‘ghost world’, as this family tries to sort out what’s what in this continuation of the WiFi apocalypse!

The original “Pulse” had issues. An American remake of a Japanese scare fest, the movie left most people wondering where the scary stuff went. Now two years later, those same viewers are standing about scratching their heads wondering who exactly wanted a sequel to the original. “Pulse 2” arrives direct to video which is no surprise. What is a surprise is that it’s actually better than the original.

The one element keeping “Pulse 2” from the trash bin is that Director Joel Soisson has some definite camera skills in setting up some great shots, and the story actually makes more sense. He also works hard to show us both worlds, that of us lowly humans and that of the digital dead as well. Where “Pulse” was muddled and confusing, “Pulse 2” is only slightly muddled, albeit intentionally. Keeping us guessing as to who’s dead and who’s alive throughout the movie, it makes for a nice guessing game. There is some good gore at play as well. While few and far between, when the ghosts set to work and make a mess, they make it well despite the fact that it's usually done with CGI. When Stephen’s girlfriend Marta lures in the unsuspecting village mailman, the effect of Marta’s dying body is well crafted and well shot. The scenes with Michelle’s Uncle Phil were cringe worthy as well as he gets ‘MacGuyver’ with the family cat and using it to keep himself alive and to disguise himself from the phantoms haunting his home.

Our big name star for “Pulse 2” is Jamie Bamber of “Battle Star Galactica” fame. Bamber starts out the film being over the top and heavily over dramatic. Watching him turn on the concern over his daughter Justine is laughable at the best of times. As the movie moves on however, you can see where Bamber becomes more comfortable in the role as his delivery becomes more natural and fitting. It’s an interesting transition to watch as he goes from unbelievable to mostly believable over the course of an hour and a half. Georgina Rylance who plays ex-wife Michelle does a passable job though she doesn’t have much to work with. Her role calling for a depressed single mother leaves her mostly emotionless and spacey; she pulls this off but the character is pretty much part of the scenery. Botti Bliss who has had many television roles does a convincing job of the bitchy girlfriend/other woman and looks nice while doing it.

It’s not saying much that “Pulse 2” is a better movie than “Pulse”; the first movie was truly horrible. Regardless, “Pulse 2” goes a long way towards trying to flesh out the story and make it more cohesive. There are some interesting developments here, some confusing plot holes as well. The IMDb page provides nothing but confusion as they talk of a third sequel even though there are no entries for it on the site. Some of the scenes contained within “Pulse 2” are obviously included to act as connectors between the two sequels; with the third movie not being out as of yet, these provide the viewer with nothing but confusion and frustration.

By all means, don’t blow the fifteen dollars buying this at the store next Tuesday but give it some consideration for your Netflix queue. It’s a definite improvement and if the third movie ever comes to light, it may combine to save the franchise from being forgotten.