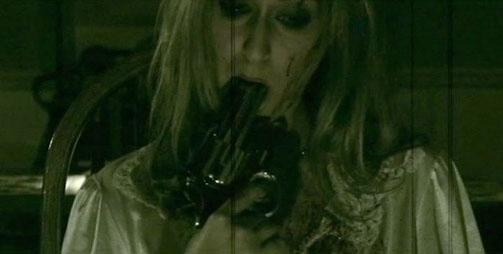 In the summer of 1999 something to the tune of 20 million Americans went and sat in the dark for 86 minutes and listened to a movie. Yes there was quite a bit of picture too, but most of the tension was realized with a black screen and exceedingly clever albeit basic sound design. None of the first person films that have come since have been able to match its visceral tension because they could not improve upon its simple sonic genius. Okay, now you can say it sucked, just remember chances are somebody who you like to watch movies with thought the opposite.

“Death of a Ghost Hunter” is not “The Blair Witch Project”. The characters perform a little mock up of Heather Donahue leaky nose speech but otherwise the film works hard to distance itself from the obvious comparison. The story has a ghost at it’s center but actually veers more into Amityville than Burkittesville .

Carter Sims is a paranormal investigator who is paid $5000 dollars to join Yvette, a local reporter and Colin, a videographer for few nights of ghost hunting in a haunted home in the Phoenix suburbs. The house was the site of a family’s bloody demise in 1982 and has been abandoned ever since. As the crew is setting up , a bible bimbo named Mary Young comes to the house claiming to have been appointed by the owner to insure that the family’s good name is not besmirched by the investigation.

The house gives up its secrets very quickly and by night two the ghostly apparitions have made themselves known in dramatic fashion. The ghosts seem to be replaying the events of the fateful night in 1982. As the crew investigates they uncover several clues that suggest the god-fearing family that now haunts the home was anything but holy when they still inhabited the realm of the living.

As I said before sound can push film, even film without picture, into sublime territory if it is managed well. This is a big strength for “Death of a Ghost Hunter” . When director/editor Sean Tretta decides to go without the lone piano or the airy synth the movie manages some legitimate tension. The dialed-down room tone layered under the dialog gives the sense of an environment pregnant with shackled energy. Another well played sound element is the EVP review sequence. Yes, maybe it is too soon on the heels of “White Noise” to call it original but the gimmick is unnerving when it is used well. The biggest problem sound wise is that the dialog often sabotages the ominous mood that the rest of the soundscape tries to forward.

If this had been an audio book I would have liked it better. The cinematography is only intermittently effective, the acting is poor to middling and on two occasions the editing turns a small performance issue into a conflagration of hilariously mistimed reactions. The set-design is negligible and lighting-wise there are a few nice choices.

As far as the story goes there are some nice touches that keep the proceedings interesting longer than they otherwise would be. The character of Mary Young goes from horrifically stereotypical to interesting, unfortunately the rest of the characters sort of run in place.

The biggest detractor of all may be the film’s one hour forty five minute running time. At 60 minutes I might be able to recommend this to those who can forgive almost anything for good atmosphere. At its present length I think it is a tiny bit boring an overfull with expository dialog and inadequately trimmed first person footage. I will say that if you are an indie filmmaker that wants to see some effective sound design on a budget than this might be worth a look. Just don’t forget that there was a much better template forged back in 1999, almost exactly 10 years ago today.