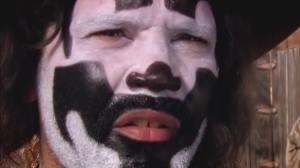 I remember seeing Insane Clown Posse merchandise begin to crop up in the late years of junior high and early high school. At the time, I truly thought they were just a passing fad, two painted rappers who would eventually lose their edge and move on like a spring rain shower. More than ten years later, as I popped “Big Money Rustlas” into my DVD player, I have to give ICP a certain modicum of credit. The first ten minutes of their DVD, prior to even the title menu, is advertisements for various products, services and wrestling associations that the ICP supports or utilizes. Their continued commercial success seems based not so much on their music but their value as a lifestyle and brand name. To that end, the duo is a tour de force.

“Big Money Rustlas” is ostensibly a parody of the wild west genre, and the story, such as it is, does contain many tropes of the simplest of the Zane Grey based movie era. We see Violent J as Big Daddy Chips, gambler, extorter and general ne’er-do-well who is holding the small town of Mud Bug hostage. Shortly thereafter, Shaggy 2 Dope, portraying the singular hero Sugar Wolf, rides into his hometown to liberate it from Big Daddy Chips. Big Daddy is not to be undone so easily, and sends a list of progressively more dangerous assassins to put Wolf six feet under and restore the town to his brand of social disorder.

After a hitman puts a hole in Wolf’s shooting hand, he is forced back to the drawing board to recover his shooting ability, where he is retrained by Mud Bug resident and friend Dirty Sanchez. As you might expect, there’s a showdown, a plot twist, and an ending that doesn’t really come together. I suppose it would have been presumptuous of me to expect something of tangible competence from men who once rapped that they don’t know how magnets work, but “Big Money Rustlas” is rife with miscues. From a film making standpoint, the worst offender, and the one that sends the movie down the wrong path from the first frame, is the audio. So much of the dialogue and sound effects are so blatantly dubbed in during post-production that the entire movie smacks of the kind of “screw it, we can fix it in post” attitude that first year film, television and radio production students are taught to avoid.

One of my favorite professors in television production once addressed this by saying “you can polish a turd, but it’s still a turd.” That’s a valuable lesson and one that director Paul Andresen (not to be confused with Paul WS Anderson,) should have kept in mind. While we’re on the subject of audio, the soundtrack for “Big Money Rustlas” is disappointingly pedestrian. The movie could have been advanced, or at least given a curious twist, if ICP and their band of musical friends had taken the time to pen a few tracks for the score. At the very least, with so many musicians acting in the movie, it would have been an opportunity for ICP to showcase a few new tunes (remember how many number 1’s Elvis scored with his movie singles?) Plus, a western with a heavy metal/horrorcore/rap-metal soundtrack would have at least given Andresen and the editing team some interesting decisions to make.

As it is, the soundtrack, save the opening and ending theme, is strictly non-licensed production music stuff. It would be a penalty for piling on if I mentioned that the script left something to be desired, and anyone who expects a movie the caliber of “The Outlaw Josie Wales” from “Big Money Rustlas” is a fool in the first place. Still, there are points of concern. Jamie Madrox and Monoxide of Twiztid are remarkably awful as Violent J’s two primary henchmen. I understand that their role is to play the two annoying, haphazard sycophants to J’s Big Daddy, but their timing and sense of dialogue flow is so wildly unfounded that I honestly wonder if there were any lines written for them at all, or if they were told to ad-lib whenever they felt it appropriate.

Jason Mewes mails it in as Dope’s deputy, and Ron Jeremy makes an appearance as Dope’s father. There are a few cameos that make you raise an eyebrow, like “hey, there’s Dustin Diamond,” and “wow, Tom Sizemore must really need the money.” The scariest cameo of all is from Scott Hall (Razor Ramon, whatever,) as a listless drunkard who manages the town’s ever changing population sign. His appearance sends shivers down the spine because there’s a fair chance that might not be too far from his actual life. The jokes, such as they are, are of a lower brow than you might expect, and that’s saying something. Composed principally of profanity, the gags are below the lowest common denominator and are mostly reminiscent of junior high locker room bravado, bullying and bullshit.

There are a couple sight gags that work, but for every instance it elicited a mild chuckle from me, there was an unnecessary long shot of a horse’s ass. In an environment where I expected a lot of gratuitous nudity, there is none. Honestly, it would have helped the movie along if there had been some. “Big Money Rustlas” is a movie that seems like a long inside joke that most people certainly aren’t in on. I’m sure that the Juggalos nationwide will congratulate their overlords with much hollering, chest-thumping and numbed head-nodding of tacit agreement. Nonetheless, the movie consuming public at large will either loathe this movie, or more probably, ignore it completely. Violent J and Shaggy 2 Dope will probably make a few dollars off it, at least. Whoop, whoop, indeed.