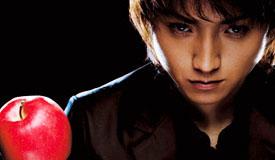 “Death Note” is a manga series that spawned a mega-franchise in Japan including an anime, two live-action films, a spin-off focusing on a fan-favorite character, three video games, seven soundtrack albums and enough licensed merchandise to make George Lucas salivate. In the US, however, the franchise remains fairly obscure for those who aren’t anime fans or Nipponophiles even as a big budget Hollywood remake of the film looms. Is “Death Note” an irresistible fantasy of power, intrigue and murder or just a kiddie tale dressed up in goth clothes? As it turns out, it’s a little of both but that’s not a bad thing.

Light is a intelligent, disillusioned law student who finds a notebook conveniently dropped by a Shinigami (death god) named Ryuk. This notebook, called Death Note, has a series of arcane rules inscribed in its inner cover that explain how it can be used to give the owner power over life and death. If the possessor writes the name of any person in the notebook and thinks of their face, that person will die instantly of a heart attack. If a cause of death is written next to the name, what is written will come true and the person will die in the manner the possessor describes.

Seeing the failings of the legal system, Light sets out to become a justice-bringing vigilante, killing criminals who escape justice through technicalities or lack of evidence. When dozens of high profile criminals die mysteriously of heart attacks, the media surmises that this can’t be a coincidence and that someone must be behind the wave of deaths. They give the killer the Engrish nickname of “Kira” and the police put together a task force, led by Light’s father, to find and stop Kira.

The task force is aided by a mysterious super detective known only as “L”, who initially only communicates with the police through a Macbook. After successfully baiting Kira and learning some details about him, L reveals himself to the police and we find out that the brilliant detective is actually a teenage otaku, fond of eating sweets in a peculiar, dainty way while he hunches and squats on sofas in the hotel suite he rarely leaves. Think Val Kilmer in “Real Genius” recast as a geeky, thumb-sucking Sherlock Holmes.

Meanwhile, Light has escalated his killing spree from killing escaped criminals to killing imprisoned criminals to eventually killing innocent FBI agents who are getting too close to discovering him. Killing the FBI agents puts another agent who also happened to be the girlfriend of one of the murdered agents on his trail. Trying to throw off suspicion while keeping up with his daily criminal murder habit, Light finds himself caught in a game of cat and mouse between him and L that is stuffed with intrigue and double and triple crosses.

The first thing that must be pointed out about the “Death Note” movie is that this is really only half a movie. Two hours in I found myself wondering how they were going to wrap everything up by the end and as it turns out, they weren’t going to. The film ends with the set up for the second movie as Light joins L’s investigation to find Kira, even though Light is aware that L is convinced that he is Kira. That convoluted sentence sums up much of the “he knows that I know that he knows that I know” fun of “Death Note.” It’s all a bit goofy and unbelievable but this is a story that was originally written for adolescent boys, after all, and when given a choice between plausibility and something a fourteen-year-old boy would think is awesome, the awesomeness wins every time in this movie. Some heavy philosophical and moral issues are occasionally brought up just long enough to seem deep and edgy before they’re brushed away for the next bit of awesomeness.

There are few things more awesome than videogames so it’s no wonder that the world of “Death Note” sometimes feels more like a Capcom game come to life than the setting for a conventional film. The not-very-believably-rendered CG character of the death god Ryuk even looks like an end-of-level boss crossed with the mascot of an 80s metal band. Ryuk is an interesting character because even though he is Light’s constant companion who is invisible to everyone else, he openly tells Light that he isn’t on his side or on L’s side, but rather just wants as many names in the Death Note as possible because he gets to keep the remaining years of life that belonged to those killed by Death Note.

Because “Death Note” isn’t really a stand-alone movie, it’s hard to recommend it without having seen the sequel. As half a movie, it is quite entertaining, even though it does have pacing issues and tends to drag on in parts. Many people will probably not like “Death Note” because it is essentially a live-action anime and actions that are easy to accept without question in animation seem hokey and strange when we’re watching real actors. That’s actually the strength of “Death Note”: if the filmmakers had tried to ground the movie in a real-world setting and strip away the artificiality and immaturity they would also strip away much of the charm and be left with a dour, flavorless movie. I’ll place an early bet here that that’s exactly what the upcoming Hollywood remake gets wrong.