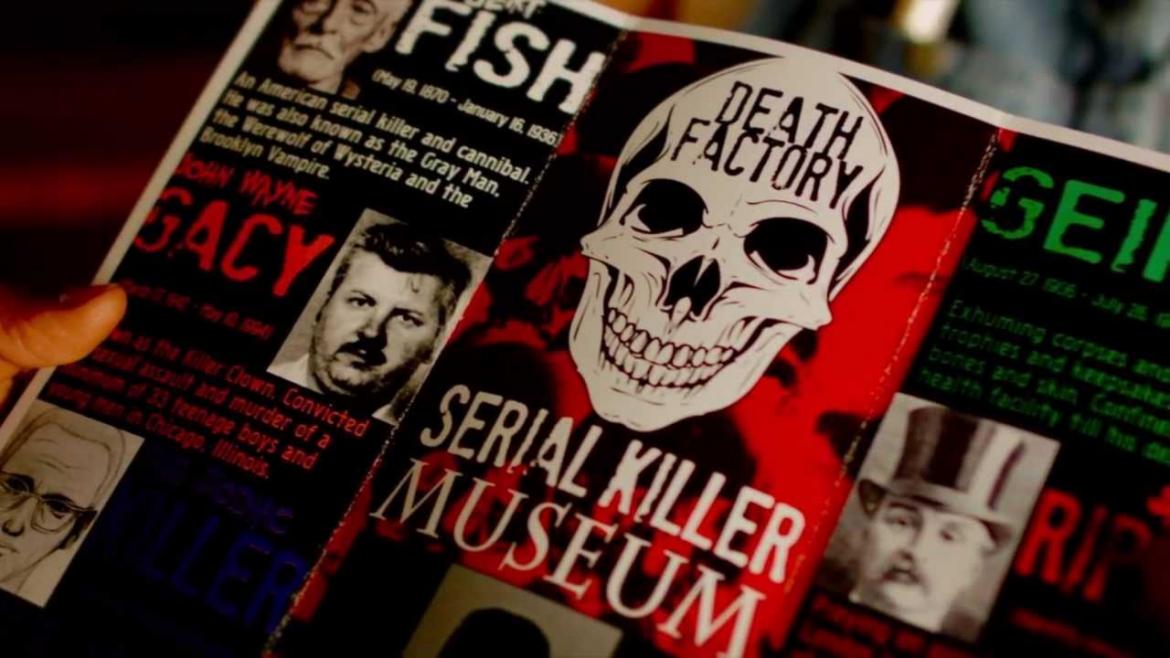 Death Factory (aka The Butchers) follows a busload of strangers who get stranded in the desert on their way to the Grand Canyon and quickly stumble into the middle of a Satanic ritual. They see a sign for the Death Factory after the bus breaks down and start walking, hoping to find a phone. Their destination is a museum commemorating six of history's most diabolical serial killers. The museum's owner, an eccentric hillbilly, has recreated the crime scenes and living spaces of Jeffery Dahmer, Ed Gein, Jack the Ripper, and more, and even has a vial of blood belonging to each of them. Unbeknownst to the passengers, a young man has chosen this night to resurrect the six infamous killers that are commemorated at this museum, in order to fight them all until only one remains. As night falls the group becomes the unwitting prey as they seek shelter within the horrifying setting.

This is the first movie for rookie director Steven Judd, who co-wrote the script with David McClellan (who also has no other projects attached to his name). While the concept for the film is a new and interesting one, the production team's lack of experience shows in just about every aspect of the finished product. The opening scene of the film portrays a domestic dispute between an estranged couple that gets unnecessarily violent, with the husband repeatedly punching his wife in the face to the point that her teeth start falling out. The wife makes some cryptic warnings to him just before he slits her throat.....and then we never reference it again. The scene has absolutely no further bearing on the story, except that we find out it was a flashback of one of our protagonists. The characters never talk about it, the cryptic warnings never get explained, and there doesn't seem to be any real payoff to warrant such an absurdly violent scene. This pattern of loose ends pervades the entire script, as things continue to happen with no real explanation and the film ends with a "twist" that is completely incomprehensible

Death Factory also fails because it "punches down," or mocks a group of people that have less power without any of creativity or wit. Of course the horror genre has a lurid past of punching down.  This is not to say that gore, violence, and nudity don't have their place in horror, because of course they do! The problem with this movie is that the casting, dialogue, and characters themselves fall into racist and misogynist patterns that don't feel knowing or intentional at all. The passengers on the bus break down into familiar tropes: two vapid girls who are wearing spike heels despite the fact that they're going to the Grand Canyon, a married Christian couple, a goth couple, and even a black woman who actually tells one of the other characters that she doesn't care about exercise because she's just trying to find some chicken. Almost every female character is shown in her underwear at least once, and each woman killed is topless at the time of her demise, whether she was fully clothed prior to the scene or not.

If the concept was well done enough to stand on its own, this would be worth the watch. Unfortunately for Death Factory (aka The Butchers), the resurrected serial killers are mostly just there to knock off victims and don't get much screen time of their own, and the few scenes where our baddies fight each other are far too brief. You're probably better off just reading about them instead.