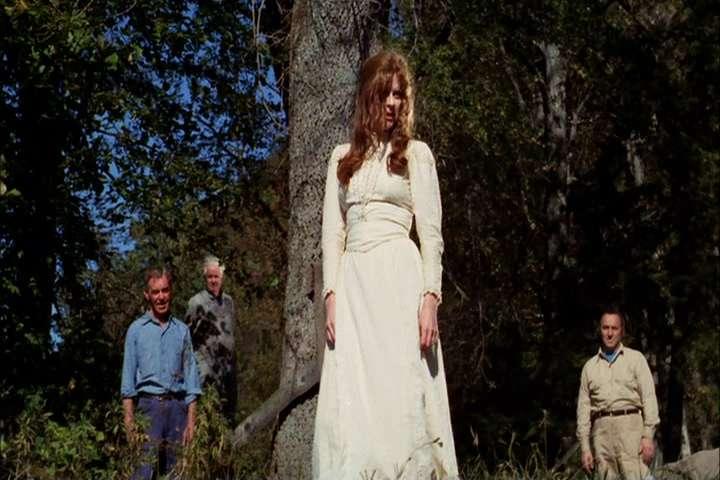 1971’s “Let’s Scare Jessica to Death” reemerged recently on the pages of Rue Morgue magazine following a screening in Toronto. After nearly 40 years the film looks dated and is bound to be a difficult sell to those who have cut their teeth on the posh, plastic-craft Hollywood horror of the post-“Scream” era. If on the other hand, you are a bit older or have taken time to bolster your ideas about horror by watching what came before, then there is a lot of value to be had in ‘Jessica’. An innovative film that informed much of what came after; it is a departure from the conventions that dominated horror cinema in the years preceding its release.

The film tells the story of Jessica, her Cellist husband Duncan and their free-spirited friend Woody who retire from the mania of the Big Apple to an apple farm in rural Connecticut. Jessica is freshly released from a six month stay at an institution of an unspecified nature, though it becomes apparent quickly through auditory hallucinations that her mental health is in a fragile state. As the group begins to set up shop in the country they find a squatter on their property. Emily, is a mysterious beauty whose enchantments eventually win her an invitation to stay on and help out on the ranch.

As you can imagine this tiny commune can’t manage peace for long. The surrounding community is filled with hostile older folks, the group lacks cash and Jessica’s insecurities are starting to manifest in new imaginary voices, including one, that of a cajoling seductress, which seems to be coming from Emily. The trio of Woody, Duncan and Emily try to manage Jessica’s burgeoning paranoia. But when a mute girl appears in the orchards and leads her to the corpse of their lone friendly neighbor Jessica unravels. Emily proves a crafty succubus who bedazzles both Woody and Duncan, the hostile townsfolk set upon the ranch to destroy the hippie farmers, and the dead neighbor reappears in perfect health, but is all this really happening or has Jessica had another break?

“Let’s Scare Jessica to Death” has many of the techniques that would come to define the horror film and television of the early 1970’s. The fisheye close-ups to reinforce strange inner perspectives, the jolting electronic screeches on the soundtrack and the reverb on the voice over will all feel familiar to fans of Rod Serling’s “Night Gallery” or movies like “I Drink Your Blood” and “The Texas Chainsaw Massacre”. But ‘Jessica’ was ahead of the game or at least in early on these stylistic conventions. What is more important is that these tools are used to great effect and manage to make what would otherwise be a very slow film into an effectively eerie mystery.

The slow pace of the whole affair may challenge some viewers but it is helped out by the fact that there is a very specific subtext at work here, one that is also a fixture of the era. If ‘Chainsaw’ is the ultimate visceral statement on the loss of hippie innocence and the close of America’s greatest epoch of change, then ‘Jessica’ is sort of psycho dynamic companion piece. The free love and social reform movements of the sixties not only isolated those who wanted no part of the progressive ideologies, it also provided ample excuses for people to separate themselves from pasts that they no longer wanted to be associated with. The hippies in this film are not victims of a group of deviants who didn’t get the message; so much as they are a group of young people ignoring the significance of their own demons. This is expressed through the characters’ fears and responses to Jessica’s psychological history. Escape is their only answer, but their chasing a false sunrise that quickly gives way to the irrepressible darkness of Jessica’s mental illness.

The sophisticated modern audience will pick up on many of the films shortcomings pretty quickly. The sound is very patchy in spots and despite a great soundtrack the music cues are far too obvious in many places. The acting is good overall but every performance has uneven aspects. It would also be fair to remark that while the camerawork is sensational there are points where the shots resemble a 70’s, soft filter affirmation poster; the kind the dentist hangs on the ceiling above the exam chair to try and transport you away from the grinding savagery of his drill.

Admittedly there are many possible readings of the end of “Let’s Scare Jessica to Death”. It is a good thing that director John D. Hancock has left all this territory open to exploration and that no perspective is definitive. His choice to do this allows for a bewildering endpoint that is both startlingly existential and loaded with supernatural imagery. The ending features no jump scares and no obvious sequel indications. It is just a girl left to battle her malevolent subconscious in what may or may not be a toxic universe.

This film is an early salvo from America’s most nihilistic cinematic decade; it is also an insightful consideration of the emotional legacy of social transformation. The film attempts to describe and dissect the era in which it was made. “Let’s Scare Jessica to Death” isn’t a timeless masterpiece, but it just might be a time specific classic.