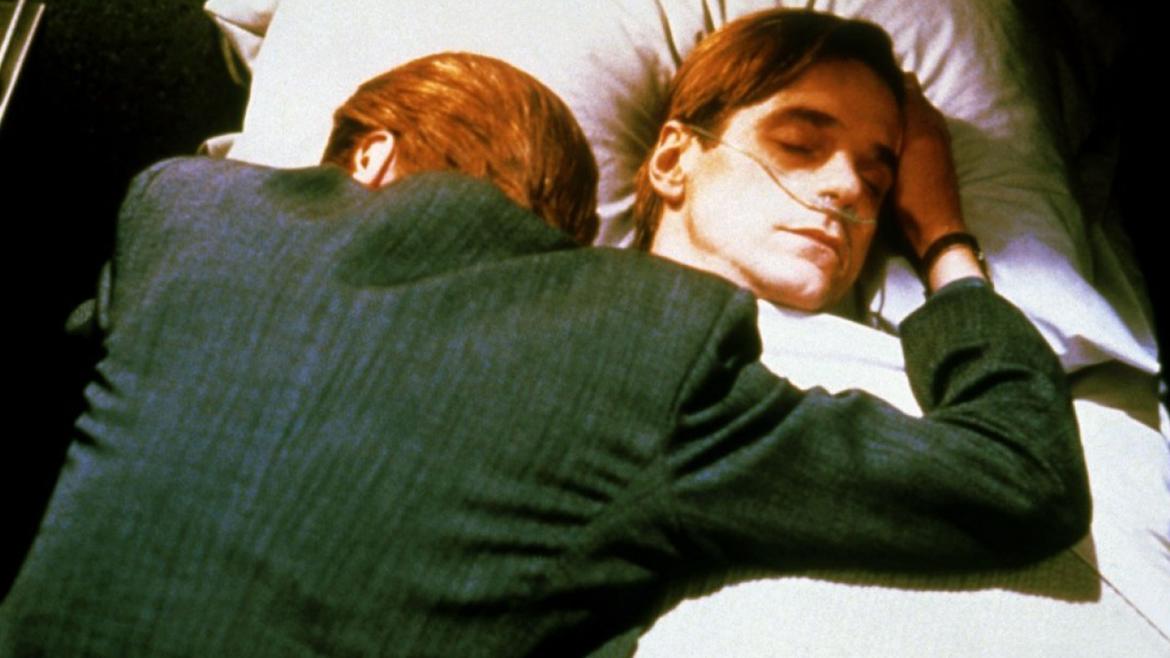 It’s hard to describe the premise of Dead Ringers without sounding like the set up for an asinine joke--two identical twin gynecologists fall for a patient with a mutant uterus, stop me if you’ve heard this before, hur hur. But write it off and you’ll miss out on one of the great cult thrillers of the ‘80s. Yes, there’s some humor to be found in Dead Ringers, but it’s of the perversely pitch-black variety, and only one element in a careful blend of dread and psychodrama.

Beverly and Elliot Mantle (both played by Jeremy Irons) are renowned physicians who have dedicated their lives to their practice, and to each other. They live a life of luxurious codependence, sharing women and occasionally posing as the other when necessity (or neurotic amusement) calls for it. It’s during such a game--when Elliot pretends to be his brother to seduce one of their patients, then goads him to do the same--that the typically shy Beverly forms an uncharacteristic attachment to a member of the outside world, upending the life he and his twin have been carefully building together since they were children.

The woman in question, Claire Niveau, is an actress with a (fictional) condition--a “trifurcated”, or three-chambered, uterus--that has made her infertile. What’s heartbreaking news for Claire is potentially groundbreaking research for the acclaim-hungry Mantles, who beguile their way into her inner circle. Beverly may be “the quiet one,” and Elliot the skilled seducer, but Claire is the antithesis to each of them, anguished and forthright where they are callous and deceptive. It doesn’t take her long to wise up, and when she does, she correctly directs most of her anger at the smarmy Elliot (in a terrific scene, she quietly cuts him down to size in her film trailer while in makeup for her role as a bruised, bloodied assault victim). Soon she leaves town to work on another film, and when Beverly starts to suspect that she’s seeing other men, he grows unbalanced, paranoid, and drug-addicted. And he drags Elliot right down with him.

What makes Dead Ringers so brilliant is how consistently it resists every cliched trap it sets up for itself: indistinguishable twins; secretly polar opposite twins; the free-wheeling lothario who resents his dependent brother; the genius who grows tired of being exploited by an incompetent playboy, etc. The power balance between the pair shifts endlessly, and the question of who needs whom more, or who is the more ‘stable’, is never fully settled--even after the wrenching ending. Though they are introduced as opposites, or complements, their personalities begin to flow into each other, and at times it’s deliberately unclear which character is onscreen.

Dead Ringers lays its theorizing on thick, but it’s never dull or pretentious (this is the same director, remember, whose work has featured parasites that make their victims helplessly horny, and a woman whose rage manifested itself as polyps that became her murderous offspring). The first time they have sex, Beverly ties Claire up in a crucified position with tourniquets and surgical clamps. As his madness deepens, he’s haunted by gruesome nightmares, and eventually teams with an outsider metalworks artist to design gynecological tools for “mutant women.” Elliot sleeps with identical twin escorts, one of whom he instructs to call him “Bev,” the other, “Ellie”. There’s a quasi-incestuous menage-a-trois dance number….You could parse its symbolism forever, but Dead Ringers will is weird and atmospheric enough to satisfy on the first viewing.

And yet Cronenberg mostly stays out of his own way, ceding a lot of ground to an excellent script and performances by Geneviève Bujold and Irons. Irons' greatness cannot be overstated. It would be thrilling to watch this subtle, tormented war of the wills played by any skilled actors; that they are played seamlessly by the same man (who spends probably a great majority of the film without anyone else onscreen) is part of what makes Dead Ringers unforgettable.

It may disappoint fans on the hunt for something more gory or gross, but it’s one hell of a character study. Let yourself be drawn into their bottomless psychoses, and you’ll be haunted for days.