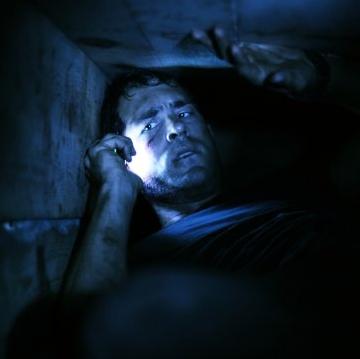 It seems prudent to get this out of the way up front: no, the film's trailers and title are not misleading. The entire 90 minutes of Rodrigo Cortes's "Buried" does indeed take place in a coffin containing Ryan Reynolds, who plays an American contractor in Iraq. He has been kidnapped and buried alive for ransom.

"Buried's" very essence is a gimmick, and there really isn't any reason to beat around the bush -- if the gimmick works for you, the film is going to be a win. If it doesn't, you're not likely to be won over.

That being said, first-time director Cortes, working from a script by first-time scribe Chris Sparling, deserves a heaping helping of credit for seeing this thing through to the end. It is a gutsy move to make your first feature -- a full 90 minutes, remember -- with one actor in one location. Amazingly, how he actually pulls it off is by playing the concept as realistically as possible.

When Ryan Reynolds's Paul Conroy wakes up in a pine box, he spends a fair bit of time straight-up freaking out. In fact, "Buried" opens in total darkness, the same darkness that Conroy experiences. We then hear him knock around, pawing and screaming. Eventually, he finds a lighter in his pocket and illuminates his new prison. By this point, nearly 10 minutes into the movie, rational viewers would be excused for asking themselves if this could possibly continue much longer. The coffin is tiny and claustrophobic. The camera angles are so strained, and at times so tight on Reynolds, that it seems inconceivable that an entire movie could go on like this.

But go on it does. And to Cortes, Reynolds and the entire team's credit, the film manages to sustain real interest. Achieving this most often with tension, Cortes also manages to weave a little knot of a mystery. Why is Conroy here? How did he get there? And why such a strange assortment of items in his pockets? Some of these are mysteries to the audience, and some are mysteries to Conroy himself. Through solid voice acting and judicious pacing, Cortes strings out these handful of questions long enough to carry the film.

"Buried" succeeds far more than it has any right to. If anything, that Sparling's script garnered enough financing to make the film a reality is a miracle in and of itself. Getting made may be be the film's largest achievement, for while it never falls apart, it never truly soars either. Set in Iraq, the film deploys politics when it is convenient to the action, and along with the intrigue, some of the action itself pushes the bounds of reality. This wouldn't be such an issue, but Cortes seemed such a stickler for "putting us there" that any violation feels all the more extreme.

If you made it past the first paragraph of this review, you may as well watch the film. If nothing else, you will get to have what feels like a very personal experience with Ryan Reynolds. From there, everything else is just icing on the cake.