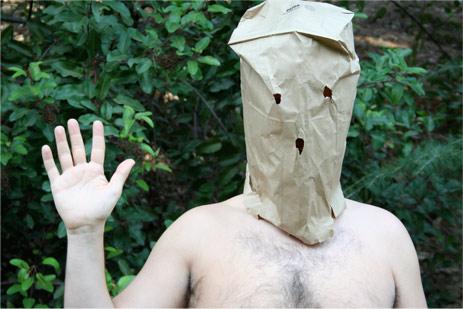 One of the biggest complaints against slasher movies is that the characters are dull and there’s so little effort put into making us care about them that when they finally do meet the wrong end of a machete it’s never really upsetting. The flip side of this equation is the quirky indie relationship movie where the characters and their interactions are the film’s raison d’etre, which critics contend results in a plotless bore of endlessly talking heads. “Baghead” isn’t quite a mash-up of the two styles but there is enough chocolate in its peanut butter to result in something out of the ordinary and very entertaining for fans of both styles.

Jay and Mark Duplass, the brother filmmakers behind the movie, are usually identified as part of the unfortunately titled “mumblecore” movement so named because the films tend to be talky semi-improvised lo-fi relationship comedy-dramas shot on consumer digital cameras. “Baghead” mostly fits that description but the brothers clearly aren’t fans of the label because they open the movie with a funny bit of self-satire that takes a swipe at the aesthetics and subject-matter of the style, as the four main characters attend an underground film festival and try to keep a straight face while watching a self-serious black-and-white micro-budget film made by one of their friends which has the on-the-nose title of “We Are Naked.”

Unimpressed with the film but inspired by its existence and goaded on by their inability to get into the after-party, the friends decide to give their floundering acting careers a boost by going to an isolated cabin in the woods and filming a calling card movie of their own. Schlubby funnyguy Chad sees this as his opportunity to seal the deal with ditzy Michelle, while the trip gives the 11-year on-again-off-again couple of Catherine and Matt a chance to continue floundering in their go-nowhere relationship.

After a night of drunken brainstorming when the best idea they could come up with was for a film about four people stuck in a bathroom, the would-be filmmakers find inspiration in a dream Michelle had about going outside in a late-night alcohol-induced dash outside to puke and seeing a guy running through the woods with a paper grocery bag on his head. As the four begin writing the movie, or more accurately, begin drinking to celebrate the fact that they are about to start writing the movie, odd things begin to happen and it appears as though Michelle’s dream might not have been a dream and there actually is a killer Baghead running loose in the woods outside the house.

One of the joys of “Baghead” is to see real, relatable characters in the context of a slasher movie. The naturalized, improvised dialogue helps in that the characters don’t come off as actor-y and are easily believable as real people. They don’t speak in the hipsterisms, quips and lines of exposition that typically pass for dialogue in horror movies. They are as fumbly, awkward and endearing as real life. It’s hard not to sympathize with Chad when he realizes he’s the third wheel stuck outside a love triangle, in the same way it’s hard not to smile at Matt’s enthusiasm for every half-baked film idea he comes up with.

The third act shift into horror mode yields some surprisingly effective scares as the Duplass brothers riff on slasher tropes and “Blair Witch” type POV shocks. It’s not too difficult to stay one step ahead of the plot but it is clever enough to keep you guessing and second-guessing your assumptions. The horror elements are well-done but they aren’t the focus or the point of the film. Baghead himself is a secondary character – this movie is first and foremost about four friends and the unrequited love, desire and promises that arise between them.

As enjoyable as “Baghead” is, it’s hard to recommend it as a horror movie primarily because it’s really only a horror movie for about 1/3 of its runtime. Anyone approaching this movie hoping for a slasher or even a slasher-comedy runs the risk of being sorely disappointed. As an indie relationship comedy that flirts with horror themes, however, it comes highly recommended. It has a handful of laugh-out-loud funny moments and the relationship drama is honest, moving and never devolves into sentimentality. Quirky indie comedies and slasher movies are two genres that have both die-hard fans and die-hard haters but anyone who falls into the Venn Diagram overlap between the two will find “Baghead” to be a unique and entertaining watch.