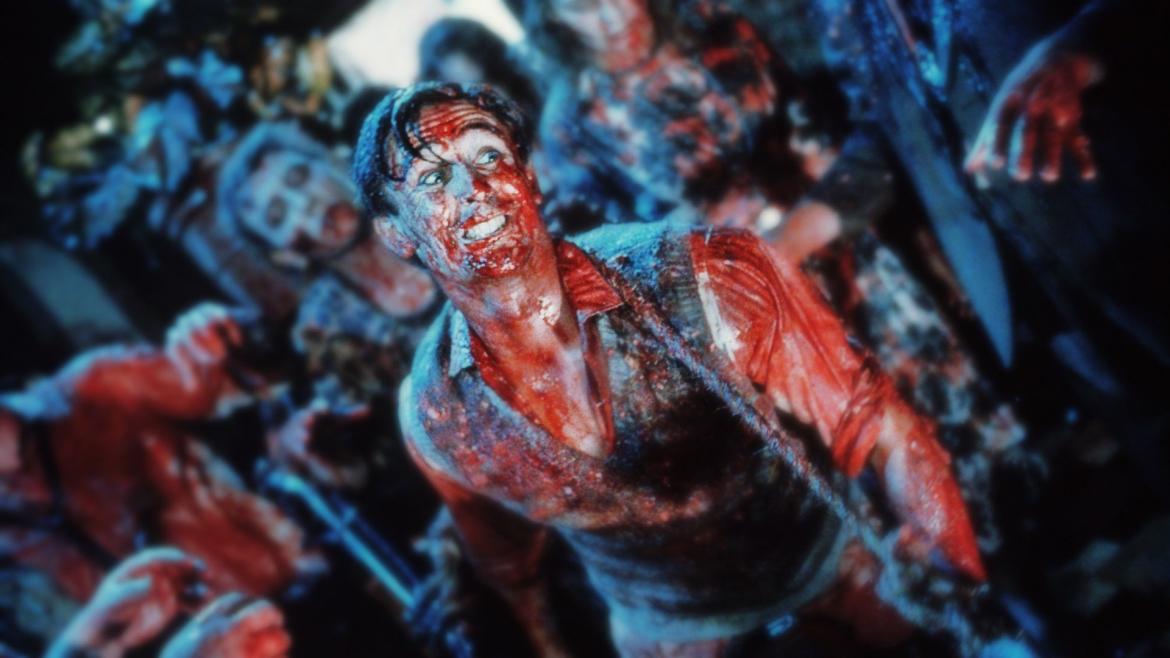 In all of its diversity of styles, capital-H Horror does not, traditionally, count absurdist horror among its many subgenres. And while this may be the first time that designation has been suggested, I think it is, without a doubt, the best way to describe a movie like Peter Jackson’s Dead Alive (also known as Braindead). In the style of Sam Raimi’s Evil Dead franchise, Dead Alive essentially throws gallons of gore and viscera at the wall to see if it will stick. Set in director Peter Jackson’s home of New Zealand, Dead Alive is your typical boy meets girl, boy falls for girl, boy breaks it off to protect girl from the collection of undead people in his basement.

At the start of the film, Lionel Cosgrove is living at home with his overbearing mother and going about his business when his routine is interrupted by the lovely Paquita. Desperately looking for love, Paquita has her tarot read by her grandmother, who informs her that she will have only one romance in her life, but that it will last forever. Their first date, at the local zoo, seems to be going well until Lionel’s tagalong mother is bitten by a Sumatran Rat Monkey. Despite his best efforts to nurse her back to health, Mrs. Cosgrove dies succumbs to the bite and subsequent infection, but she doesn’t stay dead. All of a sudden Paquita's grandmother is reading nothing but darkness around Lionel and when, before long, people all over town are turning into horrible monsters it’s up to him to save the day.

Those who are fans of Sam Raimi’s Evil Dead films will see parallels here to the story of Ash and the Deadites, but Dead Alive avoids treading anywhere near a rip-off, producing instead a zany and wholly original film that wears its influences proudly. Set during what appears to be the 1950’s or 60’s, the small town backdrop allows Jackson to play much more with change of setting and introduce some truly insane characters. If you can name me another movie where you get a crazy anthropologist, a Nazi veterinarian, a gang of greasers, and an ass kicking Catholic priest then I salute you. The expanded cast also makes more room for a whole mess (pun intended) of different kills. And when things really start to get out of hand and Lionel needs to save the day, he comes to Paquita’s aid with the family’s lawn mower in what feels like a wink to Ash’s beloved chainsaw.

Dead Alive is not a perfect film, with more than one scene that feels like it could probably be cut out – I’m thinking specifically of a scene where Lionel takes the zombie toddler for the park – but its whole is certainly worth more than the sum of its parts. The starts very early and persists pretty much throughout, maxing out in a big way in the climactic party scene at the film’s close. I first encountered this film when it was played, sans sound, at a pub where I was having dinner, and while that was not the ideal viewing experience, I am so glad I found my way back. A must watch for devoted horror fans.