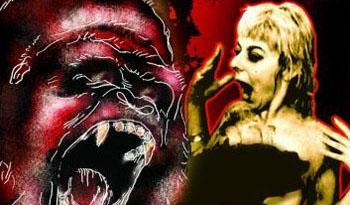 “The Bloody Ape” delivers on everything it promises. Boobs, blood, and offensive material are in evidence throughout. There is an ape suit, a racist mechanic, a racist cop, an anti-Semitic carnival barker, and a whole bevy of voluptuous Long Island princepessas getting nude for Keith J. Crocker’s camera. Shot on Super 8 for half the price of a root canal at Western Dental, “The Bloody Ape” should be fun given its story and its target aesthetic.

Lampini is a Carnival barker who pimps out his giant, friendly ape and longs to marry his fiancée Ginger. Lampini insists that she is the only thing that allows him to restrain his immense anger towards the world. Ginger rejects his proposal and shortly thereafter Lampini’s ape slips its chain and begins a campaign of terror in the community.

The police, led by the venomously bigoted Lt. LoBianco run down very few leads as the body count increases. LoBianco fingers an African American man as his prime suspect, though evidence points elsewhere. The filmmakers manage to ‘ape’ the structure of "Murders in The Rue Morgue" fairly well and by the end most of the film’s threads tie together.

Keith J. Crocker should be commended for making "The Bloody Ape" look like it was pulled straight out of the Something Weird Video Catalog. There is literally not a single well composed shot (which I will assume was intentional) in the entire film; nor is there anything that could be qualified as lighting or acting. This ‘method’ bad movie making is definitely the strength of “The Bloody Ape”. Most people try to make no money look like a million bucks, it is clear the aim here was just the opposite. If I'm correct and that's the case, mission accomplished.

As I said, this film should have been fun. There are a number of reasons why it doesn’t succeed. Chiefly, I think they may have chosen the wrong bad movies to mimic. This is more like a downgrade from “Shriek of the Mutilated” or “The Forest” than it is a warm tribute to the likes of “Blood Feast” or “Blood Sucking Freaks”.

Another strike against it is that at 77 minutes the film feels like 3 hours. The main reason is that there is not much monkey, even less blood and zero boobies in the first half of the story. Okay technically, they do throw us some nipples in the opening credits but it amounts to an unfulfilled promise for 35 minutes.

During the first half of the movie we also get a lot of racist diatribes by guys who look to have graduated from the “I’m from New York; of course I can fuckin’ act” School of Thespian Arts. The biggest problem with this, outside of the fact that it is boring is that it doesn’t feel genuine. To make matters worse the racist material doesn’t work on the South Park level, either. This is not a cleverly constructed lampooning of culturally ingrained bigotry. And because it doesn’t work towards a discernible authenticity or a satire of social extremes it probably means that the film would play a little too well with the Skins, Docs and suspenders crowd. That is assuming any of them could get past its intentionally low quality presentation.

When the ape mayhem and boobies finally appear the film actually manages to cash in on some of its potential. The highlights during this stretch include a hippie castration that looks to have been filmed in a parking lot outside a Dead show and the rape of the rabbi’s wife featuring a goodly amount of whipped monkey spunk. The ape turns slasher briefly, performs a titty-twistectomy, and re-enacts both the shower scene from “Psycho” and the famed Patterson Bigfoot footage. If they had kept to this formula for another 15 minutes they would have had a very watchable 30 minute film.

“The Bloody Ape” is a bad film and though it is calculated ‘bad’, it overshoots its mark. Or to use my favorite quote from “Ghostworld”, “This is so bad it's gone past good and back to bad again.” If you have no frame of reference for what “The Bloody Ape” is paying homage to then it is to be avoided like dysentery. If on the other hand, you have a soft spot for things like “Horror at Party Beach”, “The Wizard of Gore” or “The Legend of Boggy Creek”, this might amuse you… maybe. Actually you may want to skip “The Bloody Ape” and watch those three and “Night of the Bloody Apes” instead.