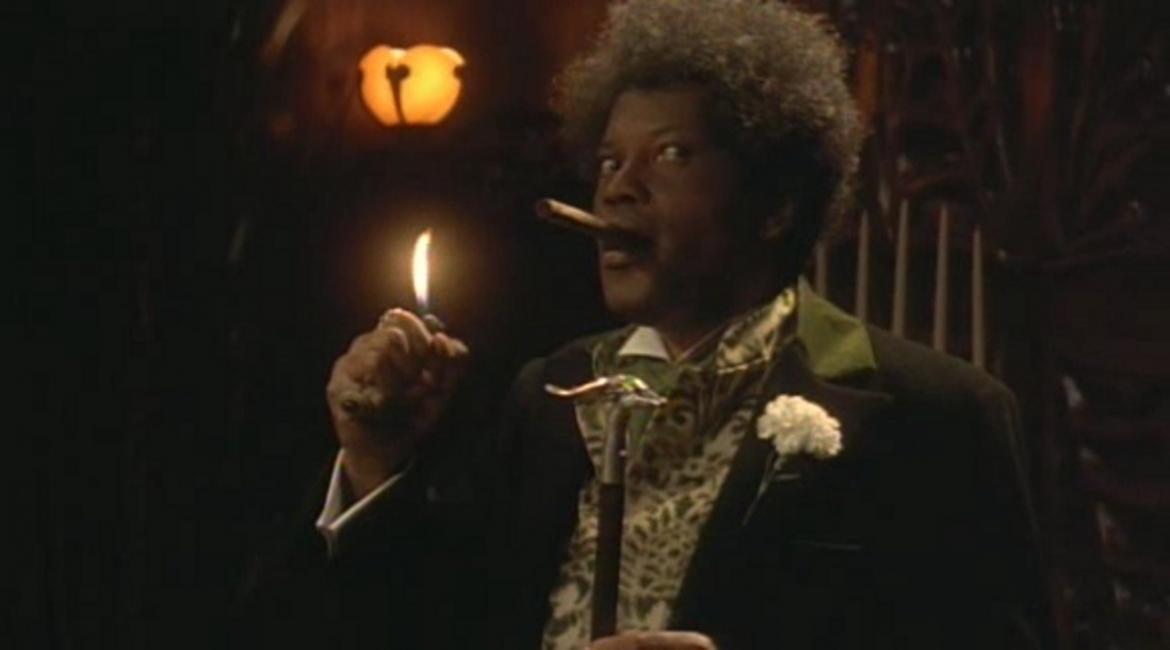 Tales from the Hood (Movie Review)

Since the election of President Obama, a lot of people have seemingly been ready to declare racism dead and announce that we now live in a “post-racial” America. Despite the fact that we now have an African-American President, there’s a pretty alarming rise in public displays of racism in America today. In fact, just this weekend I witnessed two pretty alarming outbursts directed at minorities while out and about. It was disgusting and pretty shocking to witness something like that, yet alone during the Holiday season. Even though the outbursts I saw were pretty brief, they stuck with me for a while and just subtly bothered me all weekend. Maybe those outbursts are why I was pretty happy to stumble across “Tales from the Hood” on Netflix this week when looking for something to review. As a Spike Lee production, I figured it would have something pretty interesting to say on the topic, and I decided to boot it up and see what it had in store for me. I was pretty pleased.

“Tales from the Hood” is an homage to classic anthology horror films from the ’70’s and ’80’s such as “Creepshow” and most notably, the original “Tales from the Crypt”. What sets it apart from these other films in this genre is it’s strong focus on African-American issues. While other horror films are usually set in typical middle-upper-class suburbs with picket fences and loaded with hot white teenagers, “Tales from the Hood” is mostly set in urban settings and features mostly African-American actors. While other films use a subtext that speaks mostly to suburban, middle-upper-class fears, “Tales from the Hood” is steeped in a strong subtext that speaks mostly the horrors of the inner city, institutionalized racism, violence (both domestic and gang-related) and drugs. Being a white guy that grew up in the suburbs, these are fears that I’ve never had to confront myself. However, the film deals with these issues in a way where I could find myself pulled in and put in the shoes of the characters and really find myself immersed in what the film was trying to say. I jotted down a lot of notes watching this film. There’s really some substance here.

Thankfully, this substance doesn’t come at the cost of story. Often times I find myself watching a film that’s trying to make a point and either find myself thinking that the story is suffering from all the subtext being crammed in or find myself losing interest as the film is beating me over the head with the message. It’s difficult to simultaneously tell a story and subtly deliver on some subtext. “Tales from the Hood” walks this line perfectly. The political messages in this film feel organic and are naturally a part of the story and rise from the characters. There’s nothing in here that really feels ham-fisted or heavy-handed. Better yet, there’s an extreme amount of camp that makes the entire package feel light. It’s like a good meal from a five-star restaurant, it’s simultaneously light, yet filling.

The framing narrative is a pretty unique way to deliver the four different stories. Three young gang members break into a funeral home to pick up a package of drugs from the funeral director there. Before giving them “the shit”, the funeral director explains to them the story behind four of the corpses in the funeral home. It’s a good mechanism to deliver the four stories, and honestly, it’s one of the few framing devices from an anthology film that I found to be really memorable. Maybe only the comic book in “Creepshow” was better.

The first three stories are excellent. The first is a very obvious allusion to both the Rodney King beating and the assassination of Martin Luther King, Jr. It’s also a pretty entertaining little story of zombie revenge. The political subtext here comes from the corrupt white officers that are profiling and harassing black citizens, in this case, one of whom happens to be a prominent politician. While this story could have easily gone overboard on the “white officers profile black citizens” thing, the message is actually much more nuanced. One of the officers happens to be black himself, and there’s a pretty thought-provoking position taken on the role of bystanders who stand idly by and look the other way when confronted with racism. It’s a far more nuanced message than I was expecting, and given my experience over the weekend, it hit home a bit.

Story two was my favorite, and where I think this film hit the hardest. This story deals with a young child being victimized by a monster in his sleep and his teacher that takes notice and steps in to try to do something about it. The metaphor in this story is spot-on. There’s some truly shocking, horrible imagery in this section, and some masterful mis-direction. If you only watch one part of this film, this one is by far the one to watch. It also features David Allan Grier, and really, you can’t go wrong with him.
Story three is an interesting take on the classic possessed doll story. It’s also another story that wears it’s inspiration on it’s sleeve. Going so far as to even name the antagonist after him, this story is an allusion to David Duke, former Grand Wizard of the Ku Klux Klan and former state representative from Louisiana. Outside of the obvious political reference, the subtext in this story is pretty light and just serves as goofy fun. Corbin Bernsen is perfect here in this role and really hams it up as the outlandish bigot politician. It’s a good relief from the heavier second story.

If there was one thing I didn’t like about “Tales from the Hood”, it’s the fourth and final story. While it serves as an allegory on gang violence and the American prison system, this section just falls flat. It’s far too derivative of “A Clockwork Orange” and just doesn’t fit the mood of the rest of the film. While the film on whole is very campy and has an ’80’s horror vibe, this section is really abstract. There’s also an extended segment that feels like some bizarre combination of a Tupac and Nine Inch Nails video. It’s just strange. Unlike the other stories, this one feels muddled, almost as if they tried to take on too many issues and didn’t really know how to juggle them all. Thankfully, it’s also the shortest of the four segments. To go back to the meal metaphor, it’s like a so-so dessert. It’s not all that great, but it can’t really ruin the great meal you just had. You might tell your friends to skip out on it though.

“Tales from the Hood” is a surprisingly strong film. It manages to be deep, thought-provoking but also a lot of campy fun. It’s a difficult thing to pull off, but it manages to do so very well. Outside of a slight hiccup in the fourth act, there’s really not much here I can find fault with. It’s a refreshing take on horror, and presents a point of view that’s pretty under-represented in the mainstream genre. Fans of anthology horror, or genre fans looking for something different, really owe it to themselves to check out this oft over-looked gem. You’ll have fun, but you’ll also be left thinking afterwards.