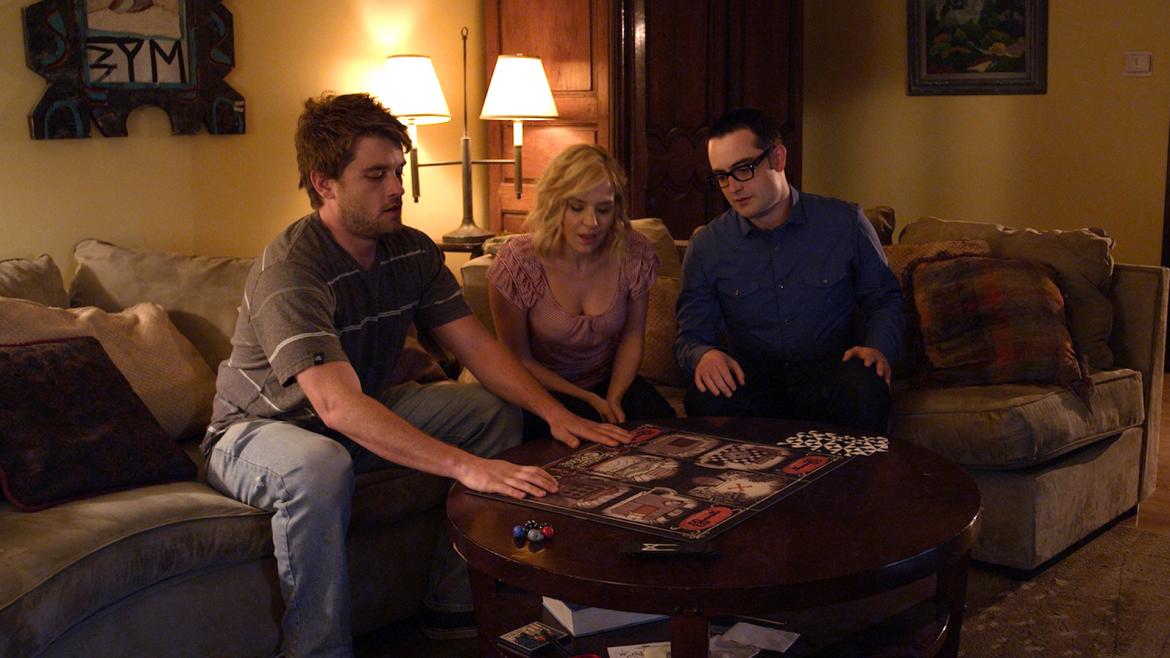 Beyond the Gates (Movie Review)

The golden days of VHS have long since passed, but that does not keep filmmakers from exploiting those who look back in fond memory of dead technology. Beyond the Gates delves even deeper nostalgia by featuring a VHS relic that until recently I didn't remember existed- VCR board games. The concept of course being your classic board game, but with a VHS that you popped into the VCR that then communicated the rules and various other interactions over the course of gameplay. Jackson Stewart combines this and numerous other 80's staples to construct a gooey and fun throwback with just a few minor squabbles along the way.

Two estranged brothers provide the central conflict of the film as they return home following their father's disappearance to pack up the remains of his dusty video store. While reliving memories of the past through the VHS shelves they find a key to his office where they uncover a mysterious VCR game, Beyond the Gates, that had recently been played. Curiosity gets the best of them when they decide to play and soon discover that the game may hold the answer to what happened to their father, but also that playing the game holds deadly consequences for those around them.

Stewart manages to do something pretty unique in regards to the formula he's used to deliver a modern throwback. Instead of opting simply for a brainless 80's splatter flick he's injected quite a bit of heart into the proceedings. The first time director exercises tremendous restraint before getting to the gushy violence in the last act. Budget constraints are likely a key factor, but in holding out on the gore the movie is able to develop the characters and facilitates a bond with their clashing personalities. In turn the resolution holds more merit than it otherwise would simply by resorting to cheesy acting and shoddy special effects.

The trio of main characters are better than we are typically given for this type of romp. Graham Skipper and Chase Williamson play the two brothers (Gordon and John) on opposite sides of the tracks with Brea Grant playing Skipper's almost way too supportive paramour, Margot. Barbara Crampton pops up here and there as the Beyond the Gates' floating head game-master in a brief, but effectively creepy turn. However, Stewart and his co-writer Stephen Scarlata's lovingly crafted story, including the game itself are the real triumph here. The spectacular, but underused gore in the final act is just the cherry-on-top.

As is so often the case in these micro-budget flicks the lack of money at some point comes back to bite the filmmakers. Beyond the Gates successfully distracts from it's lack of budget for so some time, but in the final minutes the chickens come home to roost. With more money the finale could have afforded a colorful eye-popping set piece for it's climactic battle instead of simply opting for a fog machine and colored strobe light in a basement which becomes unintentionally funny as it unfolds. It's legitimately the only real time the the film feels "cheap" and thusly the film loses a small chunk of the good will it'd built up, but a chunk nonetheless.

Beyond the Gates plays heavily towards a specific branch of nostalgia, but Stewart's assured direction and earnest storytelling blends surprisingly well with the film's splatter happy finale. Yet another up-and-coming filmmaker to keep an eye out for and perhaps with some inflated budgets Stewart's career should be exciting to watch.