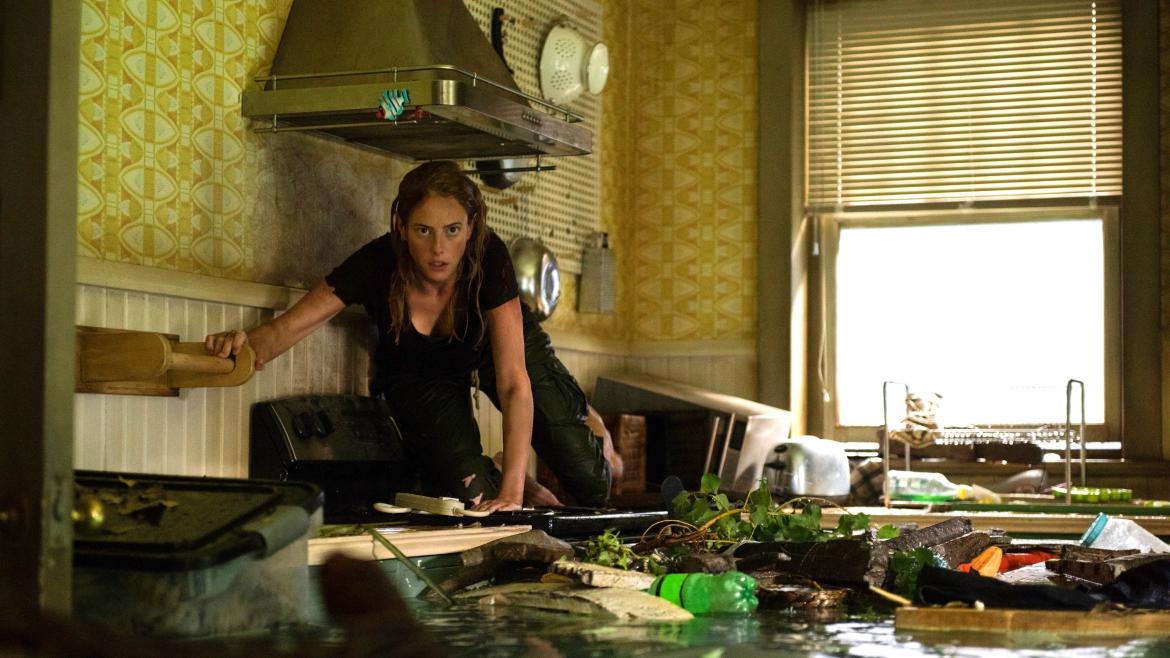 Summertime is good for a lot of things. You can almost certainly count on fireworks, barbeques, and sweating through everything you own. One of the other reliable summer mainstays is the fight-for-your-life creature feature. Most often these movies consist of our hero(es) caught in the ocean and trying their best to survive numerous attacks by a cunning killing machine. This monster almost always comes in the form of a humongous Great White Shark with dead eyes, “a doll’s eyes.”

Directed by Alexadre Aja and produced by Sam Raimi, Crawl is a refreshing entry in the “When Animals Attack” genre. Much like other films of its ilk, Crawl focuses on a relatively small cast; namely, Haley (Kaya Scodelario) and her father (Barry Pepper). The two are estranged after the divorce of Haley’s parents, but when her older sister Beth calls and informs her of a massive hurricane barreling towards Florida, Haley decides to head back to her childhood hometown to check on her dad. Upon returning to the house, however, Haley discovers that the storm may be the least of their worries as alligators begin to emerge from the flooding waters.

The movie’s IMDB page lists fifteen cast members, but the majority of its runtime is spent on Haley and her dad (and their dog Sugar, of course). Likewise, the setting of the film is almost exclusively within the house, with more than half of Crawl taking place in the house's unfinished basement/crawlspace. Aja and his cast use these spatial constraints to create a space that makes sense geographically with stakes and dimensions. Scodelario and Pepper give solid performances as well, which helps to keep us invested not only in their fear and desperation, but the tension between them.

Crawl is well paced and takes very little time to get into the action. We have seen the alligator within the first fifteen minutes and the film doesn’t let its foot off the gas for more than a moment for the remaining seventy-five. Where a shark’s eyes are dead and haunting, an alligator’s eyes glint in the dark, and blink in that creepy double-lidded way that makes your skin raise into goosebumps. The film’s one weakness might be that the alligator effects don’t always look as realistic as we might like, but certainly didn’t keep me from getting caught by every single jump!

If horror movie sharks are scary then the premise of most shark movies – that people are somewhere they aren’t really supposed to be – makes them feel scarier but more distant. Alligators, on the other hand, are amphibious. The tactics that they use to hunt and to subdue their prey are terrifying, and make for especially novel visuals on film. Rather than being somewhere they shouldn’t be, Haley and her father are in their own home. It is the monster who has gotten in, and that is all the more unsettling.