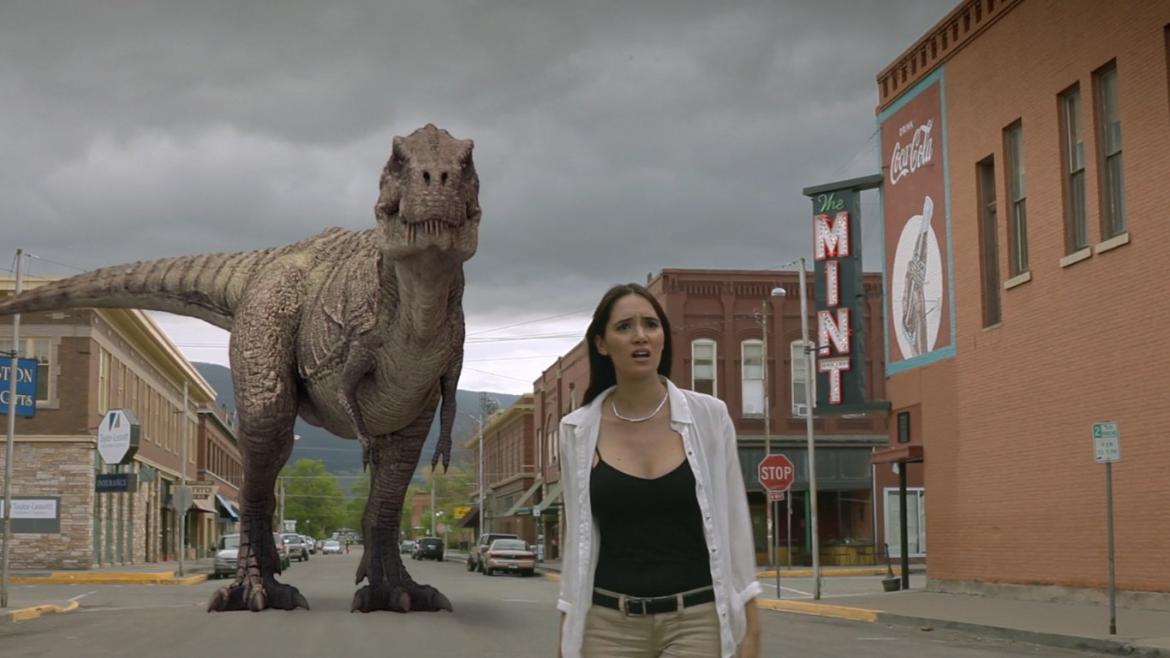 While it may not rank at the top of the all-time list of cinema dream mash-ups, the pairing central to Cowboys vs. Dinosaurs at least has some potential. There seems plenty of fun to be wrung from pitting old school cowboys armed with six shooters and strong jawlines against a horde of prehistoric villains. However, that potential gets trampled like a hung-over rodeo clown when the caveats of “modern day bro cowboy” and “molten-methane-spewing dinosaurs” are added to the equation. That’s what happens in Cowboys vs. Dinosaurs, leaving viewers with a tiresome mix of Jurassic Park and Birdemic as seen through the eyes of Florida-Georgia Line.

The titular heroes and villains (although this reviewer may not have been rooting for who the filmmakers intended) are brought together in traditional monster movie fashion. An evil mining corporation digs too deep and unleashes something awful. All those years of living underground have granted the dinosaur gang – which consists of mostly raptors – the earlier-mentioned methane-shooting ability. With the dinosaurs threatening a small cowboy town, a ragtag group of humans – headed by Val (Rib Hillis), a disgraced rodeo star turned clingy-drifter – assembles to stop them.

Cowboys vs. Dinosaurs has the goofy premise, the horrible CGI, and the hollow acting necessary to succeed in today’s B-movie game, although, it doesn’t always push the inherent zaniness of its concept quite far enough. Instead, it treads over too-familiar ground, like having a law man who wants something closed arguing with a fat-cat-type who won’t hear of it.

The main challenge with Cowboys vs. Dinosaurs is its characters. Now, character work was never going to be a strength here. Those populating this movie are grating enough to make for little more than appealing dino chow. However, watching them offed proves tremendously unsatisfying due to the crummy effects, CGI and otherwise.

Let’s start with Val, a man so committed to his own “get back on the horse” redemption narrative that he slows everyone down by riding one instead of an ATV during a crucial chase. And then there’s Sky (Casey Fitzgerald). Sky seems envisioned as the heart of the movie as she’s locked in a crippling love triangle throughout. Should she pick Val, her former flame, a guy with a hero complex as big as Texas and a propensity for death spirals at the slightest sign of adversity? Or should she stick with her current beau, the mildly psychotic, controlling Sheriff? Decisions, decisions.

It’s exceedingly unwise to go into something called Cowboys vs. Dinosaurs expecting more than a fun, dumb B-movie. The only part of that CvD really nails is the dumb. While the movie may be bad, our heroes are too much of a chore to make it bad in the fun kind of way, making this one an easy pass.