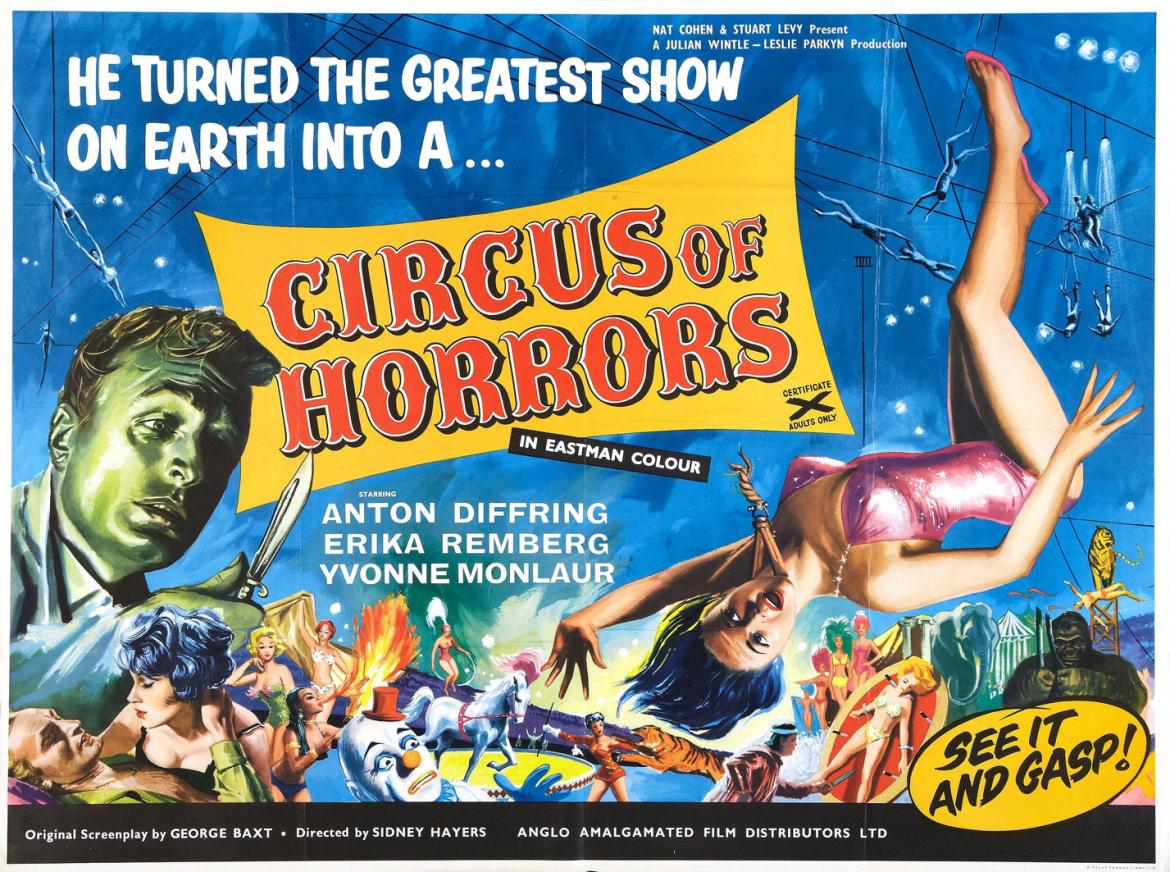 The close kinship between circuses and horror fiction has been well documented. Tom Browning’s early silent films articulate this relationship quite beautifully. The physical act of viewing segmented attractions and being moved by what the viewer is witnessing is certainly an apt comparison to the act of early movie watching. The cinema of Meilies, the Lumière Brothers, Alice Guy, or Thomas Edison have perhaps more in common with this form of artistry. And indeed, early film exhibition found its earliest home in vaudeville shows. The short durations of these films and the novel technological innovation of moving images made them ripe for multi-film programs strung together much like a circus. The modernist sensibilities of these films made up what film theorist/historian Tom Gunning has called the “cinema of attractions;” a movie going experience that emphasized both the illusory aspects of the technology, the knowledge of the film as a novel fiction, and also the ability of this fictional representation of the world to make us “believe” in them enough to react. This isn’t to say that semblances of narrative were completely absent from these films; but rather, that narrative was the frame that held together the spectacle.

“Circus of Horrors” is a film that speaks to this tradition in a feverishly clear and manic voice. It is a film that wallows in the sensational aspects of its setting. Which isn’t to say the film lacks a narrative, but it is their only marginally, providing the bullet points or sign posts for the audience and the characters on screen to get to where they need to be. Normally this type of thin logic would be laughable and hackneyed—and “Circus of Horrors” does fall victim to this from time to time—but the sheer rapturous delight it takes in showing the circus acts, moments of tense action, and sexuality harkens to this instinctual memory of what it most have been like to see a film as a “pure” attraction.

Directed by Sidney Hayers, “Circus of Horrors” begins in 1947 Britain. The film opens as a brilliant but unethical plastic surgeon flees the countryside following the accidental disfigurement of a patient. Now a fugitive, the surgeon assumes the new identity of Dr. Bernard Schuler (Anton Diffring) and escapes to France with his associates, Angela (Jane Hylton) and her brother Martin (Kenneth Griffith). The group happens upon a young girl whose father (Donald Pleasence, oh yea!) operates a failing circus. The girl’s face has been scarred in a German bombing of her school during the war and Schuler offers to repair it in exchange for part ownership of the circus. The operation is successful and following a freak accident resulting in the father’s death, Schuler becomes the sole proprietor of the circus. He embraces the role, using the cover as an opportunity to continue his experiments on the faces of criminals, turning them into beautiful specimens and blackmailing them into becoming performers. However, when more and more accidental deaths begin to pile up, the circus comes under the suspicion of the authorities and Schuler risks unveiling his past.

If this all sounds a little more than convoluted it’s probably because it is. There are a number of high melodramatic moments in which characters reveal desires or schemes that seem to just spring out from their subconscious. In particular, Schuler’s companions Angela and Martin are hopelessly tethered to the man. Angela cannot help but love him though his sexual promiscuity with the circus performers is quite apparent and to her chagrin. Martin continually expresses his angst and distaste for his role as Schuler’s assassin but continues to murder performers who may cause trouble. The final act of the film is particularly rife with moments like this. Characters who have met merely a few scenes prior are seen rolled up in each other’s arms, promising companionship and making out in that old school “face-smash” style of kissing that I hope no one ever really did. In a way moments like these have an existential quality in the sense that these people are hopelessly compelled to act but have no true focus other than what is immediately in front of them. There are scenes that seem like they could have been pulled from an Antonioni film if they weren’t saturated with screaming color and shrieking violence.

But as “Circus of Horrors” unfolds, the film’s concern for narrative causality becomes increasing absent. The film is less concerned with exploring particular character psychologies or narrative tropes than it is with exploring the sensationalist qualities of human emotion and our experience of watching bodies perform actions that would normal force emotional responses. The camera pushes in, pulls out, or cuts to close-ups of screaming, laughing, crying faces while also lingering at a distance as we watch acrobats and knife throwers in action. It is in the moments of spectacle, intratextually within the film and for the audience, that the experience of watching spectacle is foregrounded; like a wild kaleidoscope of bodies and colors twirling into a climax. This theme is presented not only in the physical feats of the acrobats but also in the “Hall of Beauty” circus stage in which various scenes from famous literature and myth are reconstructed as still lives, Schuler’s remodeled criminals standing in for Helen of Troy or Adam and Eve. In a way, Schuler’s ability to sculpt and create more perfect versions of these individuals is analogous to the act of filmmaking which frames our experience of watching the unflinching ability of the circus performers, Schuler’s violent actions, and sex.