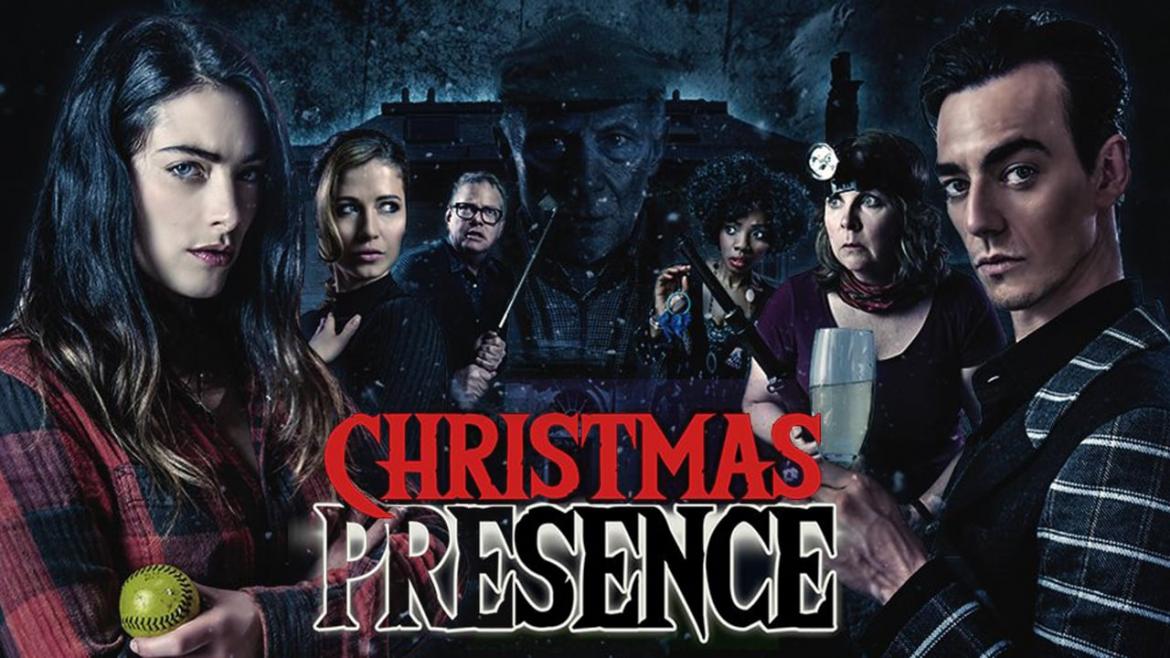 Christmas Presence recently appeared on the wheel of streamable titles on Shudder under the service's "Exclusive" banner. However, at the time of writing this, it was not searchable in any way, shape or form on IMDb or any other database under that title. It was--or perhaps still is--able to be found under the title, Why Hide? Now, the title switcharoo nonsense has no bearing on the dreadful experience of watching this movie...but it's certainly not doing it any favors.

A diverse collection of friends celebrate the Christmas season in a remote home. (The holiday is completely inconsequential to the events within the film so pay no mind). When something terrible happens to a member of the group, unspoken truths surface regarding a friend's past as the group begins to realize a sinister force is stalking them one by one.

The original title, Why Hide?, is perhaps even more confusing than the misleading nature of the switch. "Why Hide" is essentially a clothing brand that one of the characters is going to pitch to a fashion exec. The group then models these garments as they drink and let the good times roll. Yes, there is a legitimate underwear party in the middle of this movie, and again, the underwear has nothing to do with the fate of the characters nor is it ever referred to again after said underwear party. Additionally, the supernatural entity is not a spectre with a Christmas grudge nor does it appear only at Christmas. The perplexing nature of the title is merely a preemptive sign of the trouble ahead as you progress through the mess that is James Edward Cook's feature.

All this talk of the title distracts from the overall problem plaguing Christmas Presence, its complete disinterest in its own history. To expand on the film's endless vaguery, we're shown a married couple with shallow intimacy issues and unspoken animosity between characters that's never explored. There are also absolutely no rules for how this spirit works in any context and what it does give in the final moments is ruined by a character suddenly breaking the fourth wall. The film tricks viewers into taking this journey by presenting relationships that seem interesting. Ultimately the filmmakers have no intention of fleshing out these stories, letting these threads dangle as each character is snuffed out.

The lack of explicit rules allows for a frustrating Thunderdome of genre cliches. Yet, there are a handful of visuals and audio cues that in a film with more coherence would heighten its weaker tendencies. Here they serve only to dig the knife in deeper at the potential for the film to have had a broader appeal.

Christmas Presence is jam-packed with bitter reminders of wasted potential that fall victim to an under-baked concept. The film's decidedly British sense of humor, while begrudgingly charming, still can't distract from how woefully inept the film is at creating a unique genre experience clearly suffering from an identity crisis.