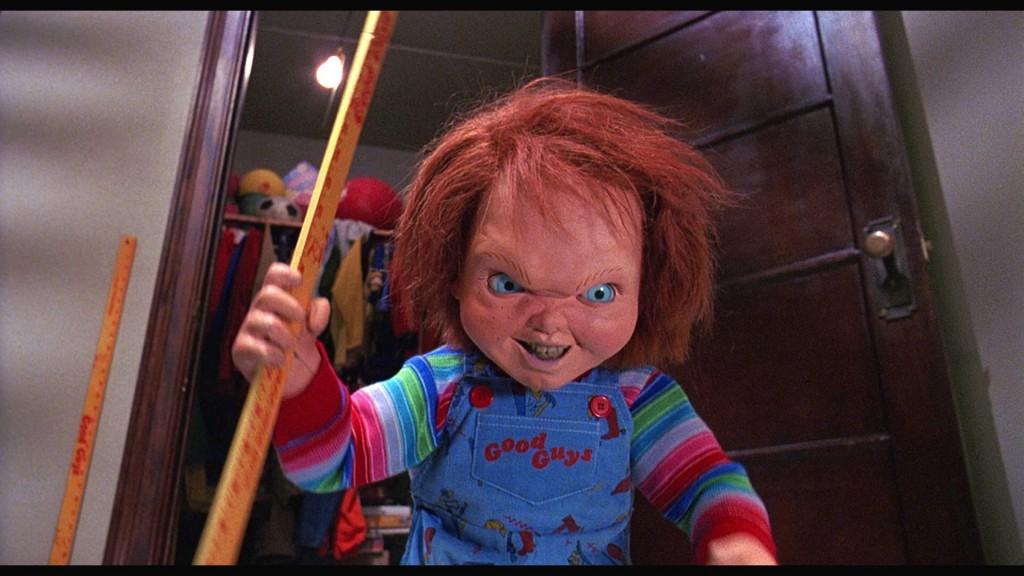 Whether they are pristine and beautiful porcelain or huggable and interactive, dolls are innately unnerving. Their blank, death eyes boring holes through our thin veneer of confidence. Basically, all dolls are evil; I’m pretty sure most any one I know has debated whether or not the household doll is creeping around behind our backs. One of the modern originally disturbing plastic maniacs is Chucky. Horror fans were introduced to Child’s Play in 1988 and have continured to see him through the contemporary renaissance of horror.

As Child’s Play opens, Police Detective Norris (Chris Sarandon) is in pursuit of a serial killer, Charles Lee Ray (Brad Dourif), who also practices voodoo. Trapped in a toy store as he is shot down, Charles Lee Ray transfers his soul thru his knowledge of voodoo into a “Good-Guy” doll before he dies. Reborn as a “Good Guy” doll, Charles Lee Ray takes full advantage as his new alter ego, Chucky. Chucky is eventually bought in a back alley deal by single mother Karen (Catherine Hicks) who is trying to surprise her six year old son, Andy (Alex Vincent) for his birthday. Once Karen takes Chucky home and introduces him to Andy – Andy is immediately smitten. Though strange events start occurring, Karen and Andy’s babysitter do not believe Andy when he says that it’s Chucky’s fault or that the doll is alive. Chalking it up to adolescent imagination, Karen writes off Andy’s behavior and allows for Chucky to stay in their home. As Chucky becomes more violent and driven to kill, Karen must rush to save her son from becoming Charles Lee Ray’s next homicidal vessel.

Though the film was released in the late 80’s it still holds up to modern day standards. Instead of over the top and cheesy CGI, Chucky holds true to his strange and unyielding plastic roots with pale dead eyes. Practical effects increase the scare factor along side the well-crafted visuals of Tom Holland. Brad Dourif’s voice is iconic as quick witted and sarcastic Chucky, whose hatred for humanity oozing through each word. Paired with plenty of false scares and unintentional as well as several very intentional humorous moments, Child’s Play is a raunchy and fun time.