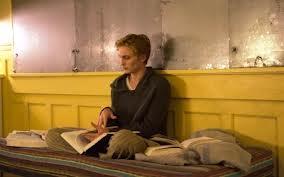 Jennifer Lynch’s first few attempts at filmmaking fell short (anyone remember “Boxing Helena?”), but she puts together a solid little thriller with 2012’s “Chained.” Combining a decent (if somewhat cliché) story and some very good performances, “Chained” is well worth a watch, even if it does take a hard right turn into crazy-town in the last few minutes.

The movie begins like so many thrillers—a woman (Julia Ormond in a small but effective role) and her young son Tim head out to the local theater to catch a horror movie and then hail a cab ride home when it’s over. Rather than taking them home, however, the cab driver named Bob takes them back to his secluded home where he rapes and kills the mother.

Instead of killing Tim, however, Bob (Vincent D’Onofrio, echoing the craziness he showed in “Full Metal Jacket”) decides to leave the boy alive. He chains Tim to a bed in the corner of the house, renames him “Rabbit,” and allows him around to clean the house and help bury the bodies of the women he drags home and kills.

Years pass, and we see Rabbit grow into a teenager, still under Bob’s sadistic thumb. While it’s probably a stretch to say that Bob grows to “care” for Rabbit, he does teach the boy. He gives Rabbit books on anatomy and begins to show him the ways of being a serial killer. These scenes are the strongest in the film as Lynch forces the viewer to ask questions about their relationship. Will Rabbit become a serial killer like Bob? When Bob brings home a girl for Rabbit, will he succumb to killing her?

One of the strengths of “Chained” is its simplicity. Much of the film is just Bob and Rabbit, playing out their roles in this dilapidated house like a stage play. If D’Onofrio and Eamon Farren (who plays the teenage Rabbit) didn’t take these roles so seriously, “Chained” would have quickly devolved into a farce. But they give good performances, particularly D’Onofrio who plays a true sadist but we also see glimpses of how his evil was created.

While “Chained” is a strong film, it is definitely not one for everyone. This is a very dark thriller, and there are some scenes sure to make your stomach churn. Most of the gore and violence (almost all against women) is off-screen, but there’s enough here to turn off some viewers.

As I said, “Chained” moves along at a pretty good clip, but that ending… what were they thinking? I won’t go so far as to spoil, but one last attempt at a plot twist really falls flat. “Chained” clocks in at about 94 minutes, but do yourself a favor and pretend this movie is only 89 minutes long. Just shut this movie off a few minutes early and spare yourself the disappointment.