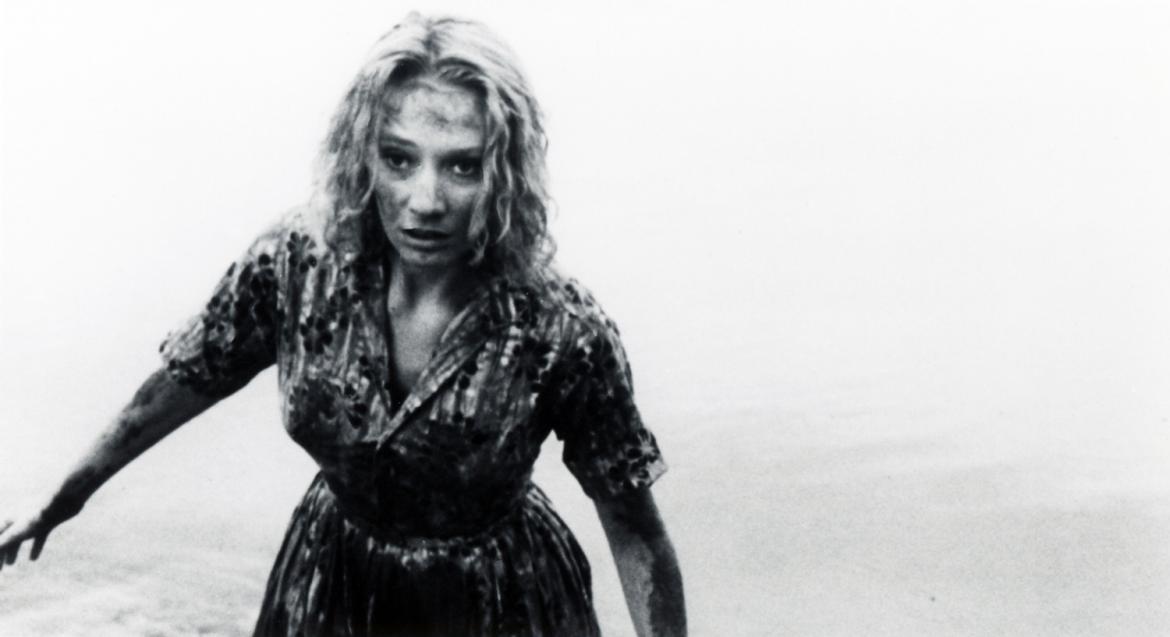 The late Roger Ebert, perhaps, best describes Herk Harvey’s low-budget, surrealist nightmare, Carnival of Souls, as possessing “an intriguing power.” One can see, as Ebert did, how Carnival predated masterpieces from Lynch and Romero: its eerie mood and atmosphere coats an oblique and minimalist story, led by sterile (otherwise detached) characters who – like the audience – understand little of what happens to them. Its pulsating, ambient score possesses a deceptive quality, both diegetic in order to enunciate a character’s inner world, but otherworldly at times, which leads the audience astray just as they’re about to unravel the mystery at hand.

Carnival of Souls often accomplishes its goal of profound disillusionment. Much like organist Mary (Candace Hilligoss) after her life-threatening car accident, we too cannot decipher the reason why she is haunted by ghouls. After she relocates to a small town in Utah, her casual romances with a local neighbor, trips to mall, and visits to a psychiatrist each end in the recurring vision of a charcoaled eyed, pale skinned Man (Harvey himself) stalking her every move. But whether Mary has gained an extrasensory ability after her accident seems far outside Harvey’s intentions.

Watching an older film from a contemporary lens is challenging: our biases cloud much of what the film accomplished in its respective milieu; yet Carnival is so unpolished, it’s difficult not to notice the groundwork others have built upon. Essences of James Wan appear when Mary first visits the abandoned pavilion to which she feels an inexplicable connection, and on a narrative level, Carnival has the ingredients of a half-baked Twilight Zone episode. The ghouls’ caked-on makeup evokes the chiaroscuro lighting of German Expressionism (that predates the film), and Mary’s hysteria (especially towards the climax) has essences of what Polanksi would incorporate into Catherine Deneuve’s character, Carol, from Repulsion.

Despite its tonal achievements, Carnival of Souls is short on delivering a compelling story. The narrative vacillates between rushed and illogical passages, and even foregoes using such moments to contribute to the film’s atmosphere. Comedic moments unnecessarily break well-established tension, and supporting characters are ill defined, with the film’s tangential plot neglecting Mary’s own disillusionment to her newfound horrors. While the third act is an overwhelming success, merging unsettling, cult-esq imagery with a clever (but now thought of rote) twist ending, Carnival of Souls frequently drowns in Harvey’s inability to define the film’s identity and offer a cohesive vision of Mary’s questionable descent into insanity.

While spurring the imagination of its successors, Carnival of Souls is a stunted mish-mash of good and tepid ideas flavored by a filmmaker unsure in his execution. As Ebert said, it has “an intriguing power,” albeit it one limited in scope, but offering enough novelty that it deserves a pat on the back in the horror pantheon.