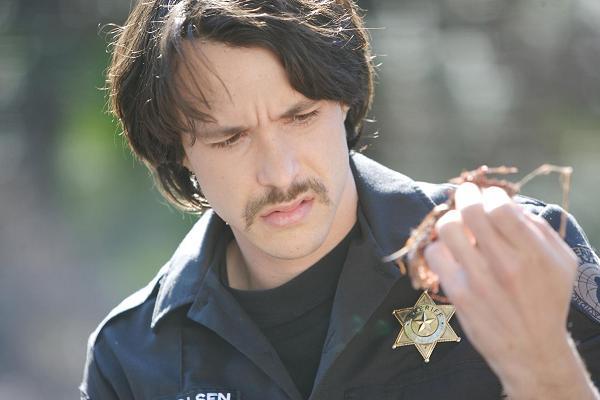 Eli Roth's highly underrated 2002 horror/comedy "Cabin Fever" has been a personal favorite of mine since my wife and I caught the film in theaters oh-so many years ago. I vividly remember a fellow audience member asking her friend as they exited the cinema, "What was that all about? What was in that box? Did they say what was in that box?", a brutal confirmation that very few mainstream movie-goers were going to understand the cryptic humor of Roth's bloody masterpiece. I've caught so much flack for loving this movie that I've actually grown physically tired of defending the damned thing. If you love it, I'm glad. If you hate it, well, good for you.

Nasty rumors about the supposedly lackluster sequel have been circulating for months, and to be perfectly honest, they're not too far off the mark. From what I gather, even "House of the Devil" director Ti West doesn't know what to make of his campy 2009 follow-up "Cabin Fever 2: Spring Fever", which is never really a good sign. Although the film certainly has its good points, there's something not quite right about this bizarre little production. The picture is, essentially, the "Superbad" of gore movies, complete with a smart-ass fat kid, dozens of sex-related jokes, and a fair amount of nudity. However, this isn't a compliment by any stretch of the imagination. No offense to "Superbad", of course.

Perhaps the most baffling aspect of "Cabin Fever 2" is the plot synopsis on the back of the DVD packaging. The description suggests that Ryder Strong's character Paul has survived his gory ordeal with the disease and is eager to help prevent it from spreading to others. Unfortunately, this isn't the case, as our would-be hero meets his maker in a scene lifted directly from Paul Verhoeven's 1985 action classic "Robocop." What's more, Strong actually gets top billing for his extremely brief appearance in the film. The word "hoodwinked" comes to mind, but I'll refrain from employing it here. Oh, wait. Sorry about that.

Once Paul has been properly smeared across a desolate rural highway as well as big yellow school bus filled with annoying children, "Cabin Fever 2" finally kicks into gear. The story concerns itself with two hopeless losers and their respective problems finding someone to take to their senior prom. Locating dates, however, is the least of their problems; the infectious, skin-eating disease from the first "Cabin Fever" has found its way into an entire batch of bottled water, which, coincidentally, is being shipped to the school for prom. Needless to say, things are going to get a little bloody. And weird.

Let's make one thing painfully clear: "Cabin Fever 2: Spring Fever" is nowhere near as brilliant or as witty as the original, nor does it strive to be. This much-delayed follow-up is structured like your typical, everyday National Lampoon's-distributed teenage sex comedy, albeit one with lots of syrupy gore and, yes, hideously infected male genitalia. It's almost as if West and screenwriter Joshua Malkin were so desperate to one-up Roth's film that they tossed as much pus-covered insanity as possible into their script. Unfortunately, there's no cohesion, nothing holding all of this madness together. Still, the tasteless jokes are, at times, jarringly hilarious. All of this nonsense certainly makes for a surreal experience, though it's not nearly as entertaining as it should be.

Recommending "Cabin Fever 2" is a bit of a challenge. On one hand, it's got enough stupid sex jokes and cornball dialogue to attract those randy individuals who adore films like "Miss March", "Sex Drive", and whatever excreted tumor the "American Pie" franchise has soiled the shelves with that month. However, if extreme gore and whiny teenagers aren't your thing, don't feel guilty about passing this one up. Without West's penchant for unconventional gore and a thoroughly amusing performance from Guiseppe Andrews, "Cabin Fever 2" would've been an astronomical snoozefest. Some movies just don't need sequels.