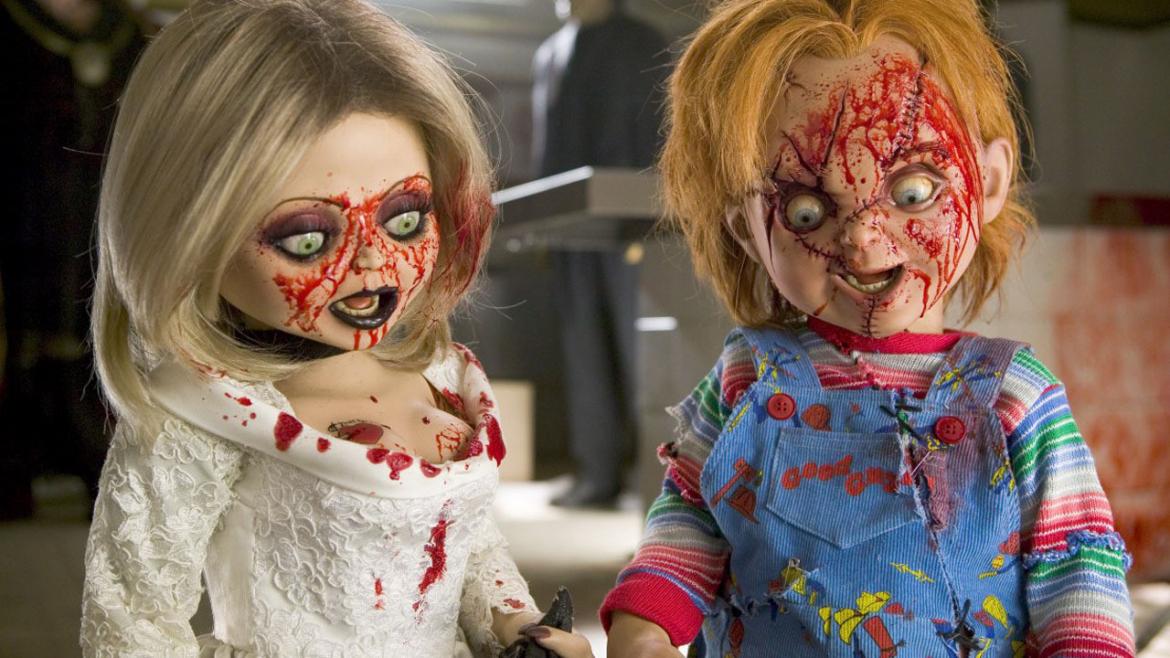 Very few movie franchises have staying power – but when they do, they rarely fail to entertain. Bride of Chucky was released in 1998 and even upon viewing in 2015 still delivers the laughs and bloody cringes.

Mourning the death of her psychotic dead boyfriend, Goth princess Tiffany (Jennifer Tilly) decides to use her feminine wiles to procure Chucky out of police evidence in order to hold a séance and revive his spirit within the doll. However, such as he was in life, death does Chucky no favors and he returns just as much as a callous and cruel jerk. Perturbed that Tiffany is only concerned with getting married, the two argue and Chucky is thrown into a playpen with a doll dressed as a bride. After escaping, Chucky kills Tiffany and in his spitefulness, transfers her soul into the bride doll. Now stuck with Tiffany, the two dolls concoct a plan using her teenage neighbor and his girlfriend to get to a cemetery in New Jersey where an amulet to correct their bodies is buried with Chucky’s human remains.

Bride of Chucky came seven years after the last film Child’s Play film, and writer Don Mancini took that time to move away from the trilogy’s tired plot and gave the franchise new life. Instead of focusing solely on possessing a human body (which is of course is still Chucky’s main objective) we get to see Chucky as a main character and are introduced to his sarcastic and ‘bad ass’ persona. This ‘new’ Chucky not only looks different (Tiffany was nice enough to sew his face back together for him at the beginning of the film) but the vibe of the whole film is altered. Instead of the terrifying pint of plastic that terrorized our dreams as kids, we’re given a smart ass and diabolically violent Chucky who likes to fawn over breasts and smoke weed all while delivering chilling yet hilarious lines of black comedy. Also introducing cult favorite Jennifer Tilly as Tiffany proves to be extremely beneficial, as now we’re not only given a female equivalent to Chucky – but someone who is just as demented and can go blow for blow. The banter between the two is super entertaining – and keeps up the campy vibe of the franchise. The film is cleverly written, not only within the dialogue but also throw in several fun homages to the horror classics which are fun to pick out in multiple viewings. Packed full of risqué sights (including a doll butt), there’s lot of blood, gore, and stylistic cinematography; not to mention the very 90’s metal soundtrack.

Franchises normally suffer with too much time between releases and even making the transition between stylistic decades – but Bride of Chucky comes out swinging and makes a solid hit. What is even more interesting is that it can hold up visually and comically – 17 years later. Bride of Chucky is a meta black comedy horror that will always be fun to revisit.