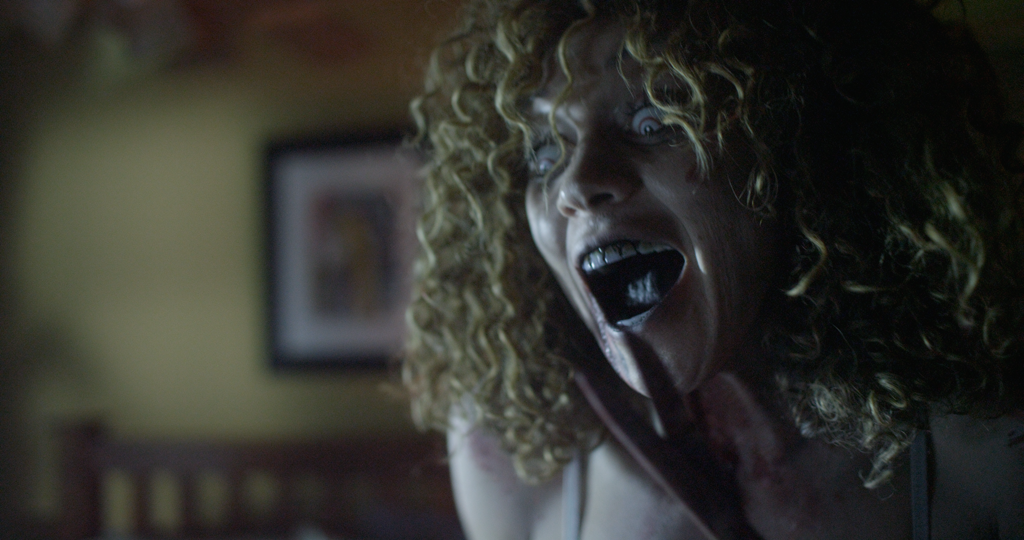 You should never judge a book by its cover. The same courtesy should be extended to movies and their poster art and let's just say Bornless Ones really earns the shady glares invited in both title and artwork. First and foremost being that the cabin featured on its poster isn't even close to the house that's actually in the the movie. Architecture criticisms aside the peculiarly titled Bornless Ones does offer an interesting cabin in the woods twist even if it is riffing heavily from a certain Sam Raimi favorite.

Once you get passed the artwork's shoddy photoshop job and continuity problems the next thing you're probably thinking is that "bornless" isn't even a word. True, you won't find that particular b-word in your standard dictionary, but it does have roots in the occult in the form of a ritual (aka The Bornless Ritual) often referred to as The Preliminary Invocation of the Goetia. It's unclear from basic Google-ing--skimming two or three hits on the first page--how deep writer/director Alexander Babaev's film explores this concept, but something tells me the filmmaker was sitting on a large pile of Bornless literature with The Evil Dead playing on a constant loop while piecing this movie together.

Babaev's twist on the familiar setup places a group of friends in the cabin in the woods, but instead of escaping to party they're moving Emily (Margaret Judson) and her beau, Jesse (Devin Goodsell), into the secluded home to care for Emily's brother, Zach (Michael Johnston). An accident caused the death of the brother and sisters mother and Zach recently diagnosed with cerebral palsy. The trio are joined by the hot and heavy couple Michelle (Bobby T) and Woodrow (Mark Furze) as they soon discover the house is also home to a powerful evil with deadly intentions.

Aside from switching things up with the setup by giving the protagonists some serious issues to deal with through, Babaev too has a hook when it comes to the spirits themselves, who only possess those who are sick or injured in some way and seduce them with the promise of healing. From there you can kind of see how things get started and where they are going as the spirits too encourage characters to hurt themselves which eventually leads to some inventive gore effects (such as drilling one's jaw back together or finding a solution to walk if your legs are broken). Meanwhile, the script alternates between B-movie cheese, semi-serious and darkly comedic tones.

Working to both its credit and to a fault Babaev never stops to drop some clear knowledge on the mythology at work. The only blatantly clear connection to The Bornless Ritual (besides Bornless being in the title) is a reference to the book of Goetia as characters are searching for answers for some of the weird and wild happenings. Efforts in shallow research revealed nothing of the shadowy "Guardians" that surround the house at one point (the film'a sole use of CGI), or the plethora of demons that can be summoned as mentioned in some of the literature found in the house.

So, what have we learned from Bornless Ones? That it's easy to replicate Evil Dead's horror recipe, but compared to your mom's home cooking imitations never quite lives up to the real thing. Babaev's take has an inspired twist on an old concept and some fun gore, but obscure mythology and predictability hinder the film's overall impact.