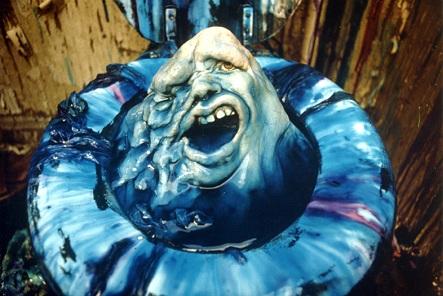 It's perfectly okay if you don't like J. Michael Muro's insane 1987 gore opus "Street Trash." In fact, I'm not entirely sure if I like it myself. The subject matter is tasteless and beyond crude, the violence is extremely unpleasant, and there isn't a sympathetic character in the bunch. That being said, any fool worth his weight in B-grade sleaze understands that "Street Trash" exists in its own peculiar little microcosm, a realm where the standard rules of cinema simply do not apply. Never mind that the picture is aimless, screwy, and lewd -- that's just part of its inherent charm. Of course, my poorly-worded opinion is definitely the minority. Finding people who agree with this statement is a lot more difficult than one might imagine.

The story is fairly simple: After discovering a crate of mysterious booze behind a false wall in his dingy storeroom, an opportunistic liquor store owner begins selling the expired swill to the homeless veterans who spend their days scrubbing windshields and causing an array of social anarchy around the neighborhood. What he doesn't know, of course, is that the hooch in question causes anyone who imbibes it to liquefy at a mad rapid pace, a side-effect that utterly baffles the city's insanely inept police department. These horrifying incidents are also greatly upsetting to the local bum population, a loose conglomerate ruled by a misogynistic fellow who bears a striking resemblance to comedian Zach Galifianakis.

There are, however, a multitude of subplots which branch out like deformed digits from the picture’s central premise. In face, it would be easier to classify “Street Trash” as a demented, ultra-gory “slice of life” feature than an outright horror flick. One second you’re watching a homeless guy casually shoplift mass quantities of food from a local grocery store, the next you’re bearing witness to one of the most bizarre variations of the game “keep-away” that will ever grace your television screen. If you find yourself dry-heaving at the mere thought of male castration, perhaps its best to keep your DVD remote handy at all times. As its title implies, "Street Trash" isn't afraid to urinate profusely across your tender senses.

If you're ready and willing willing to flex your intellectual muscles a bit, you'll quickly discover that “Street Trash” has much to say about how America treats its veterans, in particular those brave individuals who served during the Vietnam War. Like “Combat Shock,” Muro’s dramatic horror hybrid injects a fair amount of social commentary into its sick and twisted script, a fact which may escape those who are just in it for the multitude of gory, goo-soaked body melts. It’s rare to see a film this outrageously trashy attempt to address such a serious topic, especially when the point is punctuated by a severed penis.

Even if you decide not to engage your malfunctioning brain at any point during the course of the feature, there's still plenty of fun to be had. As asinine and illogical as the script may be, it nimbly sets the proverbial stage for some truly memorable moments. My absolute favorite, next to the iconic toilet meltdown, has to be the drunk's unexpectedly juicy death on the fire escape, a sequence which concludes with an irate police officer informing a mouthy female pedestrian about her lack of sexual identification. It's a classic scene from a movie stuffed to the gills with like-minded material.

Fortunately for those who've yet to experience the madness, "Street Trash" arrives uncut and censorship-free on Region 2 DVD this January. The transfer is razor sharp and crystal clear, which is either a testament to the oodles of money spent on its presentation or the great care that went into its preservation. Watching the film on a high-definition television only adds to its greatness; you'll easily mistake the movie for something that was shot yesterday, a descriptor which isn't heard too often when describing films from the 80's. Simply put, the film looks fantastic.

Arrow Video has gone out of their way to provide a definitive edition of director J. Michael Muro and co-writer Roy Frumkes' seminal 80's masterpiece "Street Trash" to UK audiences. If you haven't had the opportunity to add this icky gem to your collection, now's the perfect time to do so. However, don't feel bad if you discover that the picture doesn't sit right with you the first time through. As many times as I've seen the damned thing, I'm still not entirely sure why, exactly, I keep coming back time and time again. Some questions, I've learned, are better left unanswered.