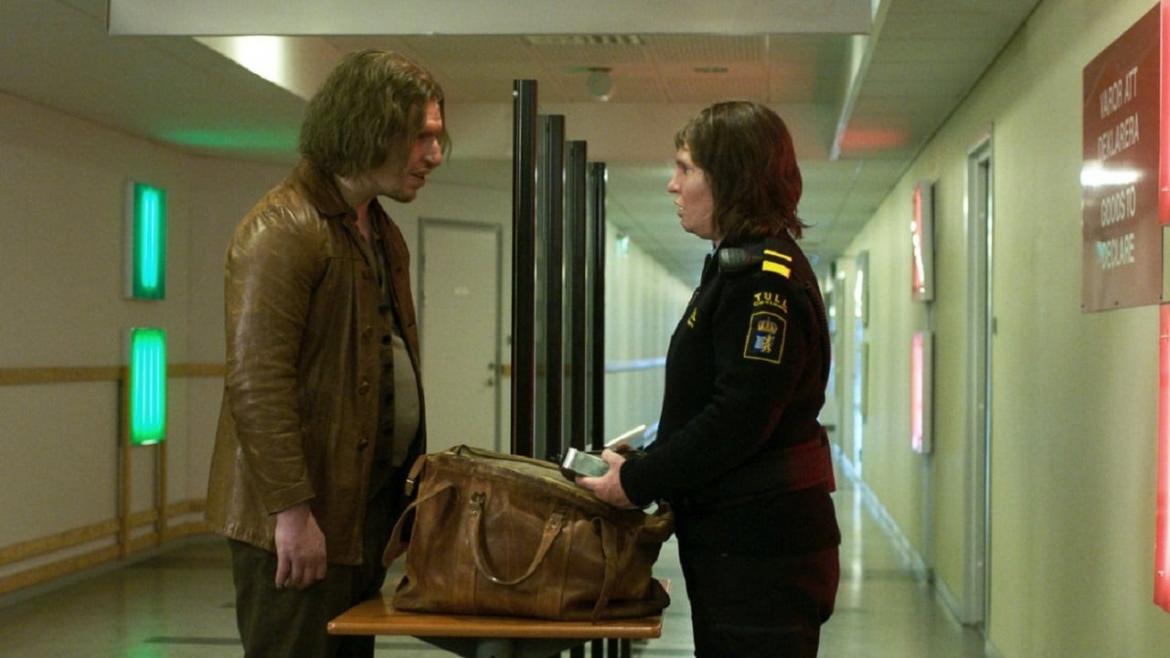 To consider Ali Abbasi’s Border is to regard how the very term may function as a synecdoche. The plurality of the definitions of “border” make the word ripe for pun hounds and cheesy metaphors. It’s unlikely, particularly in the age of border walls, immigration crisis, and Brexit, that we could deny the real world power of border as concept. What Abbasi’s film is interested in, to varying degrees of success, is the way we create soft borders in response to those ideological and actual borders.

Tina (Eva Melander) is a customs agent at a ferry crossing in Sweden. Rather than relying on sophisticated technological scanners, Tina narrows her eyes under her heavy brow, sniffing the air as travelers pass. She has a preternatural sense of smell which turns up underage alcohol smugglers and a businessman with a disturbing secret. At home, Tina lives with Roland, played with perfectly insufferable turditude by Jörgen Thorsson. He loves his rottweiler show dogs and tv while openly cheating on Tina. Her family life is not much better as her father comes in and out of lucidity in his nursing home. One day, a new traveler crosses Tina’s path. Vore (Eero Milonoff) bares a similar facial structure as Tina and the two share an unspoken bond that intensifies when he rents a nearby cabin on her property. As their relationship grows, Vore brings Tina into a more complete understanding of her identity while also attempting to shatter her sense of morality.

Border, based on the short story “Gräns” by John Ajvide Lindqvist, is an astonishing sophomore effort from Abbasi. Looking at his previous film Shelley it’s clear the filmmaker had a confident grasp of style and tone. However, in Border Abbasi and Lindqvist twist and contort the notion of thematics in such a way that you cannot help but admire the self-imposed challenge everyone involved rises to with great zeal. There’s a dissonant cheekiness and earnestness that somehow renders the film’s sillier developments into sequences full of affecting pathos.

To say there is more to the story than outlined above is a bit obvious, but to give detail fundamentally alters an experience you will have as a viewer mid-way through the feature. It’s not a question of “spoilers” or plot detail (well, it kind of is). The source material is as old as humans telling stories by firelight. For some, this might be to the film’s detriment, a mere re-hasing of something primal in a contemporary cinema of heightened verisimilitude. What this change does to Tina as a character is a powerful fulcrum which Border pivots and we as an audience need to experience that with her. There is an ecstacy on display we must fathom at an emotional level in order to comprehend what is to follow.

As with queer readings of the Sweedish adaptation of Lindqvist’s Let the Right One In, Border offers a similar opening for critical consideration. Tina’s sexual identity is an enigma even to herself. Her father makes jokes about finding cute men that she half-heartedly laughs at and Roland’s drunken attempts end with her, satisfyingly, throwing him like a jellyfish out of water. Ultimately we’re given insight into this part of Tina’s identity and for the most part the revelation works, credit to Melander’s performance. Border highlights it’s characters eroticism with the natural world. The smells, textures, tastes of the forest are portrayed with a near fetishistic lens as Tina and Vore encounter the world. The cinematography sheds it’s more veritae approach for something that nears the spiritual as Tina looks at herself with a pride she could not attain in her past. At passing glance the development poses a problematic one-to-one equation, but the film’s direction, performances, and genre ancestry help in keeping it from devolving into a dodgy allegory.

The phrase “dark modern fairy tale” can be employed as a glib logline for any number of genre films. With Border, Abbasi has made a film that knows such a reduction is hollow. With bold performances, emotionally involved storytelling, and some solid gross out moments, Border is a unique genre exercise that leaves you wanting to dig into it and the choices of its characters.