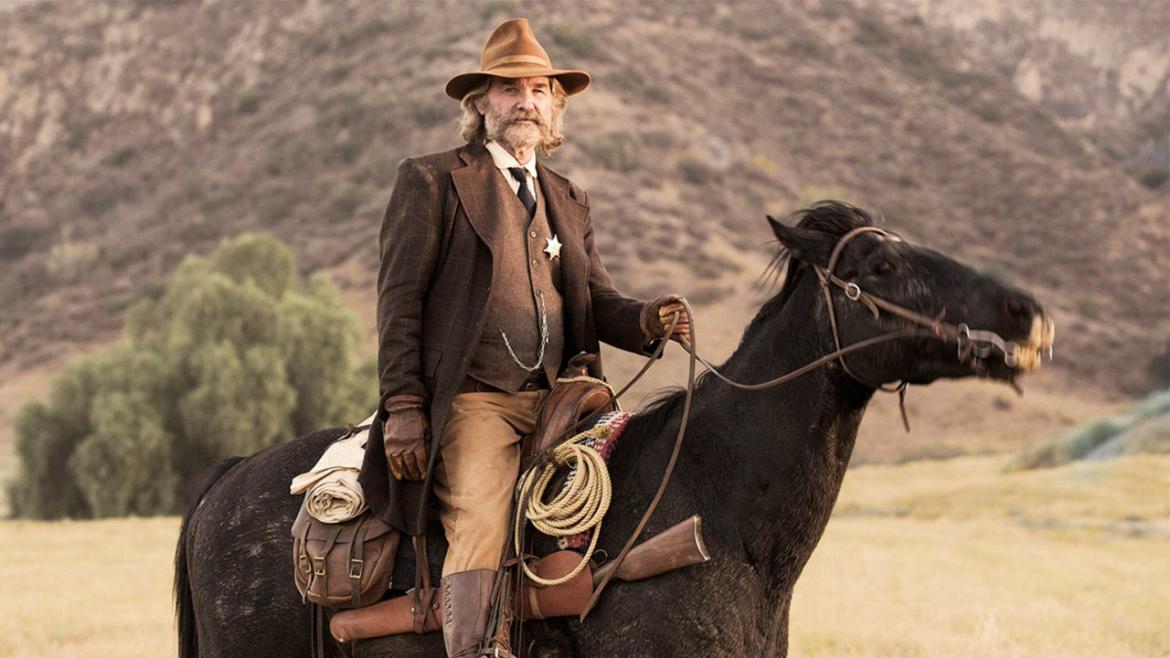 Bone Tomahawk is one of those movies where the elevator pitch is blindingly obvious: The Searchers meets Cannibal Holocaust. Not the most obvious mash-up, but novelist turned first-time writer-director S. Craig Zahler ably delivers a surprisingly meditative Western that takes a hard left into Horror without running into the ditch.

Kurt Russell is the sheriff of a frontier town which is raided by a strange tribe of mud-caked cannibals who kidnap a few locals. These cannibals, known as Troglodytes, are considered by the other local Native American tribes to be sub-human forces of pure evil. To rescue the captives the sheriff puts together a posse, which consists of his well-meaning but dim-witted “assistant deputy” (Richard Jenkins), a cowboy who is laid up with a broken leg (Patrick Wilson), and a dandy gunslinger in an ice cream suit (Matthew Fox). It’s a simple plot that has been around as long as movies have, but the touches of humor and Tarantino-esque digressive dialogue delivered by an ace cast raise the film to another level.

It’s a good thing the dialogue and acting deliver, too, because the film is glacially paced and clocks in at a way-too-long 132 minutes that feels like a DVD director’s cut that you’d watch once before always returning to the theatrical cut. Kurt Russell and Richard Jenkins have a chemistry together that makes it easy to want to hang out and listen to them have funny non-sequitur conversations about the best way to read a book in the bathtub. Almost all the action comes at the beginning and in the last half hour, so a long stretch in the middle of the movie is just guys riding horses and talking.  With two less charismatic actors in the lead, this film could have easily turned into a slog. While not quite performing at the level of Russell and Jenkins, Patrick Wilson is bland but fine, and Matthew Fox will probably surprise a few of his haters with one of his better performance.

When the movie finally gets to the fireworks factory and the horror elements kick into overdrive, it doesn’t disappoint. The Troglodytes are terrifying bad guys with stone-age body modifications and bone whistles embedded in their throats which they use to project Predator-style roars. You can’t make a cannibal movie without gore and Bone Tomahawk doesn’t disappoint. There’s one scene of extreme gore in particular that could make Ruggero Deodato flinch. Coming on the heels of nearly two hours of slow-paced Western, it’s a shock that hits directly in the gut.

Bone Tomahawk is a strange movie that feels like it is made for a very specific audience. If the Troglodytes were toned down a bit it could easily pass for a traditional western, which is a genre that is not exactly breaking the box office these days.  Horror fans will probably tune in for the cannibal stuff at the end, but it seems extremely likely that a lot of them won’t even make it that far if they go in expecting The Green Inferno and get the kind of movie their grandpa falls asleep in front of on Sunday afternoons. For those genre-loving, fanatical few who can get down equally with John Ford and Italian Cannibals, Bone Tomahawk is a rare treat.

The Shape of Water