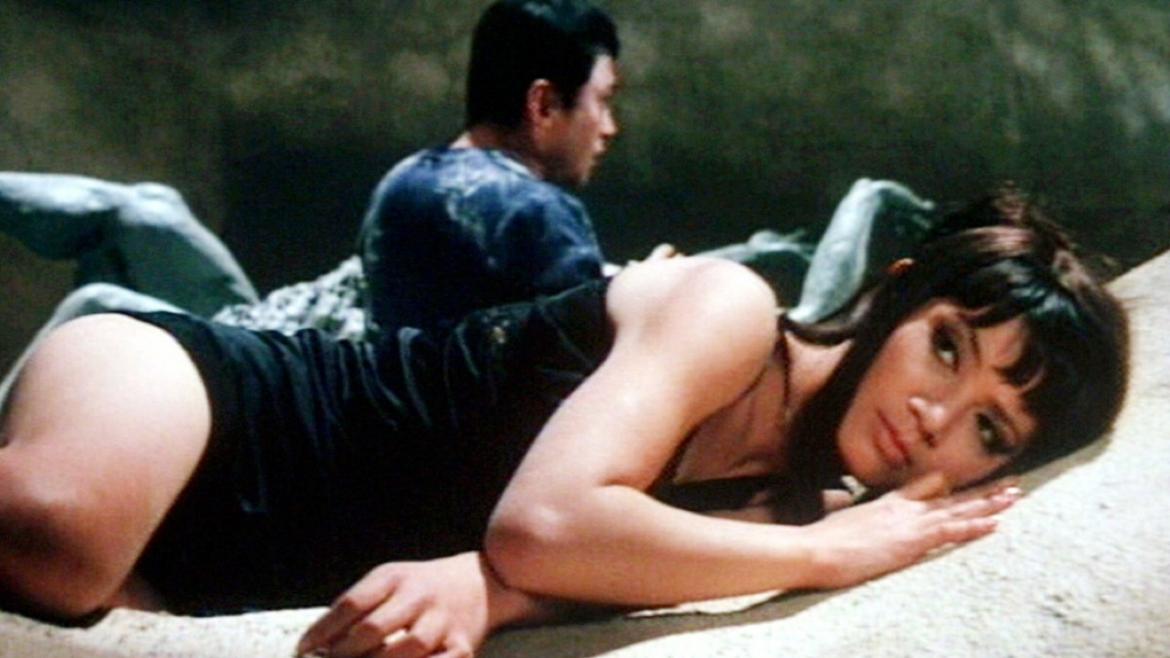 Every now and then I’ll stumble across a movie at my university library that I imagine someone must have snuck by an unwitting librarian. Such is the case with "Blind Beast", a bizarre Japanese sexploitation film from 1969.

Blind Beast tells the story of a blind sculptor who is so obsessed with a particular nude model that he decides to kidnap her with the help of his mother, and take her back to his art studio in the hopes of creating an entirely new genre of art for blind people (and doing a lot of groping).

The movie opens up with the sculptor feeling up a statue of the model, while she watches him as she hides, and then begins moaning as the intensity of his fondling the statue intensifies. Things only get stranger from here on out.

The sculptor and his mother use chloroform to kidnap the model and take her back to his art studio/rape dungeon. The model wakes up, terrified and confused, in total darkness and the sculptor reveals his enormous studio to her one wall at a time. Each section of the wall of his studio is covered in sculptures of a particular body part. So there is a wall of eyes, legs, arms, boobs, and so on. If all of this isn’t weird enough, in the middle of the studio are two enormous sculptures of naked women lying on the floor.

The sculptor eventually rapes the model, which the film leads you to believe she enjoys. It’s a small moment in the film and one I think you could write off as “Stockholm syndrome,” however this type of creepy rape-fantasy is something that appears in a lot of low-brow Japanese media, (If you don’t believe me, just watch the Criterion selection- "Hanzo the Razor: Sword of Justice"). This is the movie’s most genuinely exploitative moment, and it is glossed over so quickly that I think it is important to note.

This transitions the movie from a story about captivity and crazy art, into a downward spiral of depraved sex that involves biting, cutting with knives, drinking blood, and then eventually turns deadly. This is by far the best part of the movie and the actors really let loose with some strong, yet wild performances. You can tell the director really only cared about the scenes of crazy sexuality, as other transitional scenes seem mostly thrown together without nearly as much thought or preparation.

Blind Beast is very artistic visually, yet if there is a purpose beneath all the insanity the director isn’t clear about what it is. At one point the sculptor rambles on about “touch” being the greatest sensation, and at another point he rants about hypocritical artists who think what he does is trashy. These are small moments and so loosely connected that they don’t seem to underlay any greater purpose. What this movie really seems to boil down to is a genuine obsession with sadomasochism and the guilt this obsession produces.

As old as this movie is, I feel like it is still a pretty wild film by today’s standards, and I can only imagine what someone who saw this in 1969 must have thought (However someone seeing it back then would have probably snuck into the theater wearing a giant trenchcoat).

Besides all the crazy imagery and wild sex, I think "Blind Beast" is an endearing film. It's genuine sexploitation, but it isn’t a movie that will leave you feeling disgusted and running for a shower after watching it, like many other similar films might. It's both artsy and low-brow, and there is absolutely no hint of irony, which all modern “exploitation” films seem to wallow in. These attributes make "Blind Beas"t a very entertaining movie.