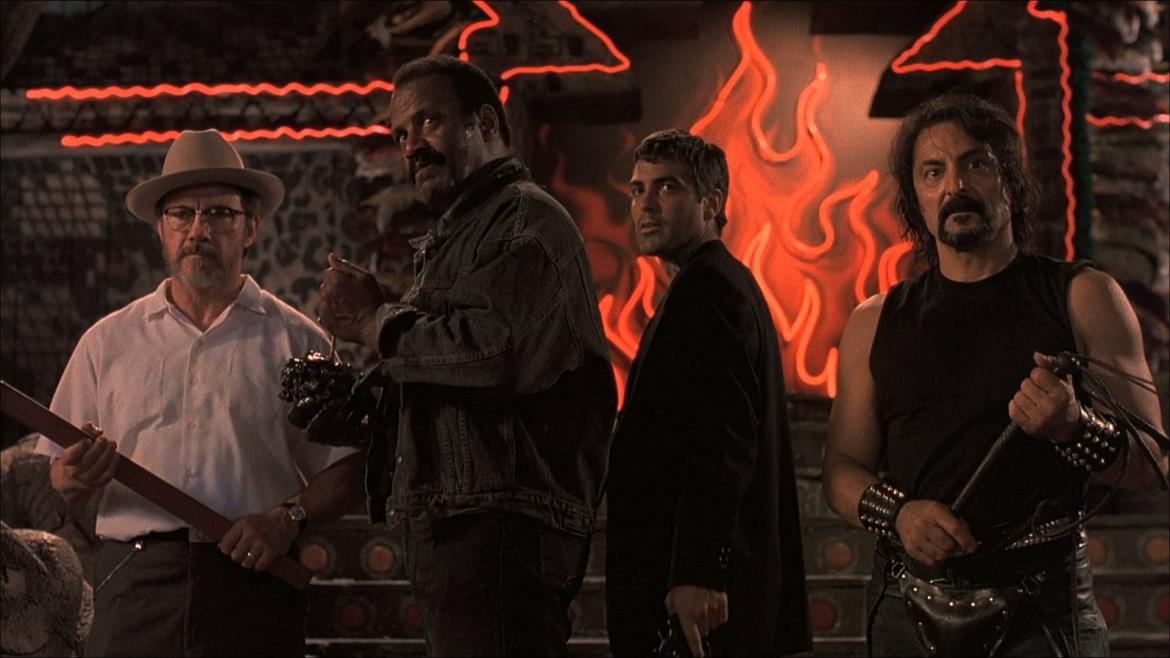 From Dusk Till Dawn (Movie Review)

In a time before YouTube, before the internet soaked up everyone's free time it was entirely possible for people to go to a movie and have no idea what it was about. I had such an experience as a young impressionable man who just thought the poster from From Dusk Till Dawn was cool and vaguely remembered an internet ad that said it was a vampire movie. Young ignorance and an incredibly cool dad lead me into the theater that day and things were never quite the same.

Seth and Richie Gecko (George Clooney and Quentin Tarantino) are two escaped bank robbers fleeing for the Mexican border. On their journey they commandeer an RV belonging to Jacob (Harvey Keitel) and his two kids Scott and Kate (Ernest Liu and Juliette Lewis). With the family along for the ride, once across the border Seth takes them all to a bar, the classily named Titty Twister, to get their drink on while he and Richie wait for their Latino business partners. Unfortunately for them and a handful of other patrons, when provoked the staff turns into some seriously ugly blood sucking vampires.

After all these years and a lackluster TV show Robert Rodriguez's vampire thriller/comedy/western/skin flick still holds up incredibly well. Sure, you have to sit through some uncomfortably pervy moments such as Tarantino parading around like a sex addict and lusting after Lewis' young physique, or Cheech Marin uttering the many flavors and colors of the female genitalia within the establishment of choice, but it's a small price to pay for what's essentially a tightly scripted and methodically paced gore fest.

The first half lends to some of your not-so-typical character development in these sleazy types of horror movies. There's plenty of backstory given to Jacob and his family, while we learn everything we need to about Seth and Richie through their aggressively hostile but close relationship while also letting the two groups establish a rapport of their own so that when the crap hits the fan there's a little something to root for and hang on to. Throw in a handful of fun appearances from Tom Savini as Sex Machine and Fred Williamson as Frost and the chaos the films final acts becomes all the more hilarious, violent and all around glorious.

From Dusk Till Dawn is one of many movies that might need a few more years before it earns a the "cult" status that it's destined for. With the help of George Clooney and Quentin Tarantino the film may likely be more high profile than most cult classics, but it's certainly got just enough oddball energy to it to turn off the normies.