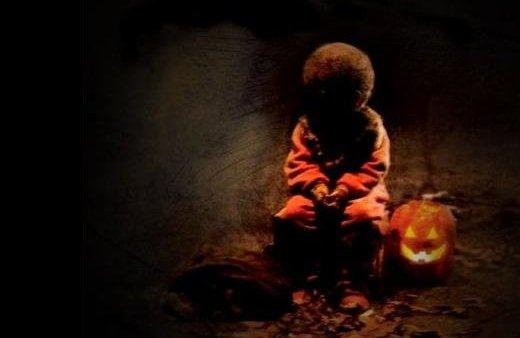 As a general rule, I tend to stay as far away from the proverbial Hype Machine as humanly possible. There have been a few occasions when said contraption has nimbly eluded my defenses and ensnared me, savagely hooking its claws into the nerdy, mucus-like substance which controls a substantial part of my thought process. More often than not, the buzz surrounding whichever project I'm obsessing over is unworthy of all the unnecessary attention, and my projected enjoyment is substantially diminished. In other words, I make an honest, concentrated attempt to keep my expectations operating in the gray zone to avoid soul-crushing disappointment. Otherwise, you're just cruising for a letdown.

"Superman Returns" scribe Michael Dougherty's elusive 2008 horror anthology "Trick 'r Treat" has been shuffled around so many times I was starting to wonder if it would ever see the light of day. Warner Premiere, a company which I have come to absolutely loath, has been sitting on this dark and twisted cinematic gem for way too long. Why they've hesitated to release this thoroughly enjoyable Halloween-themed treat shall boggle the mind for eternity, especially when one pauses to briefly consider all of rancid, pig-nasty slop they've unleashed on horror fans over the past few years. Note to the head of Time-Warner: Someone is mismanaging your direct-to-video arm, and you should address this issue post-haste.

In all honesty, I've never really had a taste for cinematic anthologies, in particular those which half-heartedly attempt to tie all of the individual segments together in some artistic form or fashion. George Romero's classic "Creepshow" -- the blueprint for which all genre-related anthologies -- did an outstanding job of making its individual stories feel cohesive and complete, as did Rusty Cundieff's unfairly maligned urban horror flick "Tales from the Hood." Thankfully, Dougherty seems to understand the importance of congruity, as all of "Trick 'r Treat's" stories are skillfully interwoven and cleverly connected. In the process, the filmmakers have effectively deconstructed the horror anthology in ways that feel fresh, new, and completely original. It's definitely worth getting excited about.

The entire film takes place on one fateful Halloween night, and focuses its attention on an array of interesting characters, horrifying creatures, and terrifying situations. In addition to seeing "True Blood" sexpot Anna Paquin sport a strangely alluring Red Riding Hood get-up, you'll also be presented with an eerie horde of zombie children, a sadistic killer who enjoys teaching painful candy-centric lessons, a pint-sized killer with extremely sadistic tendencies, and a neverending barrage of blood, gore, and scares. I'm sorry, did I just virtually compose the word "scares?" It would appear so. Although the overall tone is breezy and light-hearted, "Trick 'r Treat" does a surprisingly fantastic job of delivering a generous number of skin-crawling moments that are sure to affect even the most hardcore fanatic. Brian Cox's segment is easily the most enticing.

In terms of performances, the entire film is drenched in quality work. Besides Anna Paquin and veteran actor Brian Cox, you're also treated to an impressively warped turn by professional creepy guy Dylan Baker, who is probably most famous for his portrayal of suburban pedophile Bill Maplewood in Todd Solondz's deliciously warped 1998 drama "Happiness." Here, Baker is both impossibly horrific and, as always, genuinely funny, though your appreciation of the picture's morbid jokes, the backyard body disposal scene in particular, depends great on your sense of humor. And while I do have my own personal favorites, the entire cast is outstanding. The picture honestly wouldn't have worked without them.

"Trick 'r Treat" is an exceptional experience, a bloody, candy-coated pleasure that should become a cherished Halloween tradition for many, many people. The movie is solid, undeniable fun, and it perfectly encapsulates what the holiday is all about. I'm not sure why the film never received the theatrical release it so rightfully deserved, but I have no doubt it will find its audience. Dougherty has crafted something truly special and unique: a film that, despite the odds against it, delivers its promise and lives up to the hype. I'd almost forgotten what that feels like.