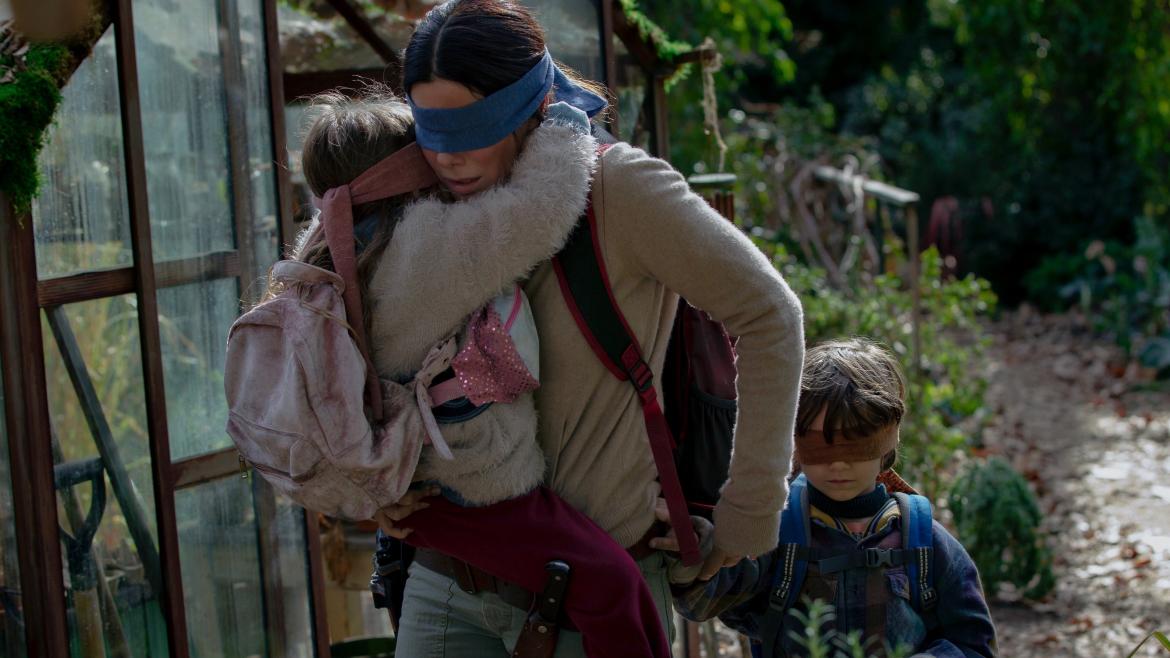 Sound is a powerful weapon in the realm of horror cinema. Whether it's a few creeks on the floorboard in the sound design of a haunted house or a literal weapon (WEAKNESS?) as witnessed in John Krasinski's A Quiet Place. Bird Box, as adapted from Josh Malerman's acclaimed novel, flips the script making sight humanity's greatest weakness, relying heavily on sound to create tension.

Sandra Bullock (America's treasure) stars as Mallory, a pregnant painter with a playfully snippy relationship with her sister (Sarah Paulson) who isn't all that excited about her upcoming bundle of joy. When an unknown overseas pandemic crosses the ocean and spreads into the US she finds herself hit with tragedy and locked in a house with a handful of strangers. With paranoia already hitting its peak and no plan as how to acquire additional resources, the group fights to protect what little safety they have. As time passes eventually a voice over the radio promises a safe haven from the danger outside. But before they can make it to a tenuous salvation the survivors must contemplate if the journey is worth the risk of floating down a treacherous, obstacle laden river while blindfolded.

It might be hard for audiences to shake plot similarities to M. Night Shyamalan's The Happening. You can set your fears at ease as Bird Box handles its ominous and unknown threat with much more tact and skill. Director Susanne Bier's task of orchestrating the adapted script is not enviable (though speaking as someone who has not read the book). It's fairly easy to see the challenges presented in this premise. The fractured timeline jumps back and forth with the present day trek down the river and the events that lead to the decision to make the journey. Right away the audience is presented with character omissions from the present day timeline so additional tension is derived from wondering how and why certain characters are not accounted for.

Smartly, Bier completely obscures the threat lurking outside, letting the audience do some of the work themselves. Theoretically, nothing the filmmakers could have presented would have lived up to what an audience would have wanted. Still, there's some unspoken issues that might linger for the non-book initiated. The mystery of the events as presented in the film make the adaptation all the better for it, yet the rules of the entities and its physical presence in the world around us are undefined. Viewers can easily read between the lines when it comes to humans who seem to have been spared after seeing the creatures in order to manipulate and force people out of hiding to then force their eyes open. However, when out in the wild the presence of the creatures is preceded by floating leaves or a loss of gravity. At one point violent wind blows as if characters are indeed being chased by something with the ability to pose an immediate physical threat, not just by sight.

The most haunting aspect of the film is that every sequence of Mallory on the river is disrupted by whispers and voices calling out for her to remove her blindfold, tempting her to abandon the relative safety of the boat for promises of safe harbor. The tension of these moments is often undercut by cliched moments of characters making terrible decisions that undermine the rules of the world they've clearly been living in for years. However, it's also valid to take into account the psychological toll one would endure having to avoid looking outside at the world, especially for the natural curiosity of a young mind.

As a relatively low-budget offering, Bier's vision of this particular post-apocalyptic setting is not that of major disaster, but simply minor sequences of panic. Everything else is almost entirely indoors with covered windows or in the river and wooded areas surrounding the river. Therefore, with few large set pieces the film relies on the chemistry, or lack thereof, between the cast. Bullock of course leads every scene she's in with assured grace. John Malkovich steps in to play the neighbor we've all had at one point and hate with a fiery passion...in fact he almost plays it too well. Yet it's Trevante Rhodes who quietly takes the reins of several scenes, as the well-to-do bystander who helps sweep Mallory off the streets when the chaos strikes. Their relationship builds slowly, but it's not until there's a fairly substantial time jump that his scenes have much more heft. In a particularly heated argument with Mallory he delivers some sound shots at her approach to their lives. Хотелось бы тебе, как профессионалу в этом деле, оценить жаркое порно в авто с сексапильной тёлочкой? Не жди удобного момента, ищи салфетки и наслаждайся горячим и страстным порно в авто и получай кайф от увиденного. Горячие, сочные девочки из роликов возбудят любого парня и мужчину. На их аппетитные формы встаёт член у каждого. These hit especially heavy as the film nears its climax.

Bird Box is uniquely suited as a companion piece to a film such as A Quiet Place. Their threats are polar opposites, but the extremes it takes to survive in both scenarios, with children, makes for tense edge-of-your seat entertainment and Sandra Bullock continues to prove that she's still one of the most talented actresses working today.