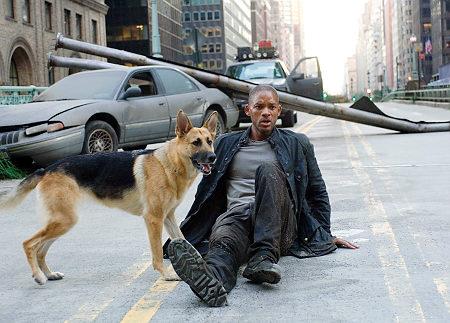 I Am Legend (Movie Review)

In one of the opening scenes of “I Am Legend,” Dr. Robert Neville screams through the deserted streets of New York City in a pristine, racing-car-red 2008 Mustang. It’s scene that conveys the destruction wrought on that city at the hands of an apocalyptic virus. Neville, played by Will Smith, is on the hunt for deer meat, literally chasing a herd of deer that has made the gradually decaying streets of New York its home.

The motivations for these actions seem multifaceted: first there is Neville, a virologist formerly with the U.S. Army, who, before the outbreak of a man made virus, had been tasked with finding a cure. Stranded alone in New York, he hunts to procure fresh meat, but also for the pleasure of it. With his dog Samantha, he rides and then moseys through Midtown and Times Square, thus resolving the scene’s second purpose of illustrating the level of both isolation and devastation.

The third element motivating this scene is the car itself. Shamelessly thrust into the action, the filmmakers feel no need to tell us where this car came from or where it goes when the scene ends. Apparently the Mustang’s existence is solely to illustrate just how fun a car like that is to drive, and how pretty it looks when it’s moving so fast.

This scene serves as a microcosm of “I Am Legend,” a film that may be best read as the lesser, PG-13 rated sibling of “28 Days Later.” While “I Am Legend” hews closely to the set-up of the novel that serves as its source material: military scientists struggles to stay alive and solve the mystery of mankind’s demise in a post-apocalyptic, urban wasteland; the filmmakers chose to abandon many of the thematic elements and plot devices that have made the book a classic of both the science fiction and horror genres. Instead, “I Am Legend”—directed by Francis Lawrence, whose only previous work of note was 2005’s “Constantine”—is content to take the road more frequently traveled in unfurling a film designed to upset as few people as possible.

Above all else, “Legend” should be viewed as the holiday blockbuster fare that it is. There are Christian undertones for the Bible belt, and the type of lazy, pedestrian intellectualism that permeates big budget films that want to seem smart. The truly sad part is that the source material, Richard Matheson’s 1954 novel of the same name, shines as a truly high water mark of science fiction and horror literature.

Adapted here by Mark Protosevich and Akiva Goldsman (the latter a scripting giant responsible for films ranging from “Batman & Robin” to “Cinderella Man”), “I Am Legend” succeeds largely by aiming low. For those familiar with more recent apocalypse horror, there will be little new material to hold interest. But what it does do, “Legend” does with aplomb. Smith succeeds in putting the film on his back and shouldering it through the slower patches. And the effects, if not the finest ever to appear on screen, are quite affecting.

Toward the end of the film, Neville stands on the wing of a fighter plane as he hits golf balls off the boat he has boarded into the city. Stopping to admire one shot, he turns to his dog and says, “I’m getting pretty good at this.” Will Smith is getting pretty good at this. For all intents and purposes, it would appear that Smith has supplanted the leading men of yesterday, the Tom Cruises and Brad Pitts, as the go to guy for films like “Legend.”

He’s an engaging and capable actor, and here, as with films like “I, Robot” and “Bad Boys,” he really shines. Similarly, Lawrence seems to emerge here as a reliable helmer for studios’ future bloated budgets. He never truly wows—just as “I Am Legend” never truly gets over the hump from run-of-the-mill blockbuster to truly enjoyable film—but he seems capable and confident in his choices. As a horror film for the masses, “Legend” could have been much worse, but Lawrence supplied just enough style to make things interesting.

Maybe most telling of “Legend,” is that of the three films to now have been adapted from Matheson’s novel, this is the first to take the same title. There’s a reason that “The Last Man on Earth” and “The Omega Man” shied away, and it is because Matheson crafted his story with such strong literary and cultural allusions: wedding it to the entire history of horror all the way to its Gothic roots.

Instead of embracing that rigorous material though, “Legend” supplants it and justifies its title with a half-baked theme of perseverance in the face of struggle drawn from the music of Bob Marley. A tremendous musician, no doubt, Marley feels out of place here, and his iconic reggae sound seems woefully inadequate when held up to the grand scope of Armageddon. What Marley is though, is uncontroversial and easily recognizable to even the most amateur music fan. He is a fitting partner then for a horror film built not for the horror aficionado, but for blockbuster consuming masses.