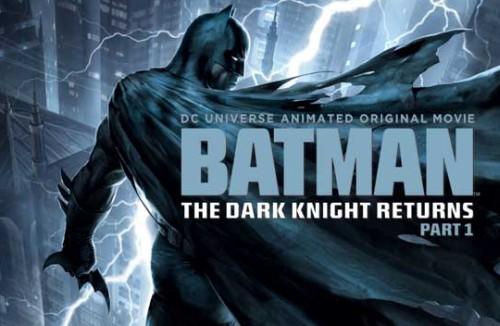 In the 90's part of my daily after-school ritual was watching Batman: The Animated Series, so I think it’s fair to say that I have a lot of nostalgia for Batman in animated form. With that in mind, I was pretty intrigued to find out about Frank Miller’s Batman: The Dark Knight Returns, which is based on a four-issue comic book that was originally published in 1986. I’ve never read anything by Frank Miller, but I think most movie fans, like myself, are familiar with the author through Sin City and The Spirit which were also based on his comics.

The film opens with a much older Bruce Wayne. who has been retired from crime-fighting for the past decade, and in the interim has turned to a life of booze and race-car driving to try to avoid thinking about his past. However, he is forced back into the role of Batman because of a group called “The Mutants” who threaten to destroy Gotham City.

Soon after donning his mask, Batman is forced to confront Two-Face, who had recently been released from a mental hospital, thanks to Bruce Wayne funding a plastic surgery for him that returned his face to normal. However, Two-Face is unable to accept the fact that his body has been returned to normal and has delusions that the surgeons made both sides of his face look evil instead of normal.

In this universe Batman and Robin have had a falling out, a young girl named Carrie Kelly is rescued by Batman from The Mutants, and because of this she is inspired to create her own Robin outfit and follow Batman until he accepts her as his new side-kick. Batman then sets his sights on taking down the leader of The Mutants.

It may be unfair to call this movie “dated” as it was originally written in the mid-80's. However the generic look and feel of “The Mutants” shows the story wasn’t written in a more contemporary era. The leader of The Mutants is an unintelligent hulking “brute” which is the type of villain that is pretty commonplace in older comics and animation. The rest of The Mutants all look almost identical, each wearing red sunglasses, exactly like the ones Cyclops of the X-men is always seen with.

That being said this film does deal with some heavier themes, such as identity for instance. Bruce Wayne hears commanding voices from “Batman,” telling him that he can not let go of “who he really is,” showing that the identity of Bruce Wayne is more of a facade for Batman, who is in fact, his true self. Also, the part of Two-Face, although it is small is very compelling, as he is so ingrained with the identity of himself as a villain he literally projects an evil identity onto himself.

There are also several arguments between television pundits about whether Batman is good for Gotham City, or if he is actually a fascist that only causes the city problems. One psychologist suggests Batman is the source of violence in the city because he projects his own psychosis onto Gotham thereby creating it’s villains himself.

This is a question that is posed rather cleverly, because initially it seems rather obvious that Batman is saving the city. However, just as Batman defeats The Mutants, the news reports of Batman that are being shown on a television in a mental hospital, bring the Joker, who was previously in a catatonic state, out of his trance.

This movie is a little hard to judge based on just one half. This first part clocks in at only seventy-six minutes, so I would have much rather preferred to see just one longer movie instead of two shorter halves. As far as quality, I felt the voice acting was a little flat for the first several minutes but improved quite a bit as the movie went on.

The animation is pretty decent, and in places, even better than I expected, but I will admit I’m pretty biased against American animation, both as far as quality and style. I haven’t been able to watch much animation in recent years, but this past week I decided to start re-watching Ergo Proxy ( Check it out on Hulu) and it was a quick reminder of how relatively unimpressive American animation is (this movie included) in comparison to Japanese anime.

However, I did really enjoy it, and I think there is a lot to like about Batman: The Dark Knight Returns. It is a big step up both in maturity and depth of content for an animated American film. Fans of the darker, brooding, and more violent version of Batman, that we’ve come to know over the last decade or so, will be pleased to see the version of Batman presented here. Plus, this is a fresh take on the character and more evidence that Batman is an archetype that is so effective that you can put it in practically any situation or “universe” and it still works.

I think any fan of Frank Miller, Batman, and other super hero movies, especially ones with more depth, such as Watchmen for instance, will have something here worth their interest.

I will be eagerly looking forward to part 2, because based on the preview included in the dvd, the second half looks like it will be even more interesting as the Joker appears and Superman shows up in an adversarial role.