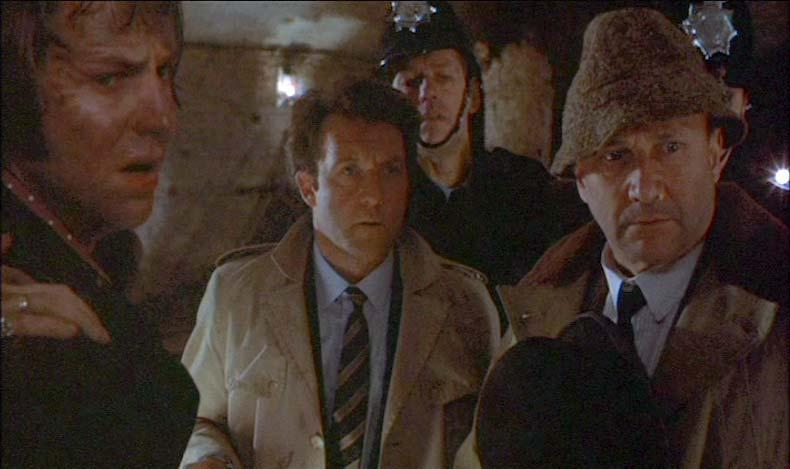 Sometimes it feels like the days of discovering a new cult film are gone. With the internet and the DVD revolution a movie can go from obscurity to widespread discussion to fanboy backlash before it’s even had a proper release.

Films that were only available on fifth generation dubs at flea markets and conventions just a few years ago now have special edition DVD releases. In the past you might read about a movie and spend years afterward hunting for an elusive copy, whereas today you can pretty much go from hearing about a movie for the first time to watching it in less than 24 hours. It’s easy to think that new movies aside, all the old classics are household names. That’s how I felt until I came across an almost 40 year old bona fide horror classic that stars one of the genre greats, and is helmed by a director with some solid credentials, that I never even knew existed until a few weeks ago.

The film was saddled with the somewhat luridly misleading title of “Raw Meat” when it played the grindhouses here in the States but on its original 1972 UK release it was called “Death Line.” It was the debut feature of American director Gary Sherman who went on to make the sleeper zombie classic “Dead and Buried”, as well as the ill-fated third movie in the “Poltergeist” franchise.

Donald Pleasance stars in a role every bit as career-defining as his turns as Dr. Loomis and Ernst Blofeld and fans are rewarded with a hugely entertaining though entirely gratuitous cameo from Christopher Lee. No less an authority than Guillermo Del Toro has hailed “Death Line” as one of his all-time favorite horror films and declared it to be the one film that motivated him to become a filmmaker. In Europe “Death Line” is highly regarded, but here in the states it has languished in obscurity for years, which is a shame because it is alternately funny, gory, touching and artful and deserves to be remembered as one of the great horror movies of the 1970's.

The film kicks off with a sleazy synth soundtrack as a proper British chap in a bowler hat propositions a young girl in a tube station. She knees him in the teabag and runs off, leaving him folded in pain as something leaps out of the shadows and runs toward him, snarling. Next we meet Alex and Patricia, a young, very mod American-British couple. They find the man crumpled on some stairs and, and despite Alex’s initial instinct to step over him like people do back home in New York, Patricia insists they stop and help him. When they bring the police back to the stairs, the man is gone and they find themselves at the middle of a missing person case, headed up by Donald Pleasance’s gruffly hilarious Inspector Calhoun, who just wants a decent cup of tea, the occasional pint or two and for young nancyboys like Alex to get a haircut.

In the course of Calhoun’s investigations, he learns of the urban legend of some railway workers who were trapped under London in the 1800s when a tunnel collapsed and the company didn’t have enough money to dig them out. According to legend, they survived in an air pocket and avoided extinction through the old horror movie technique of inbreeding and developing a taste for human flesh.

Christopher Lee’s cameo as an MI-5 agent who is an associate of the missing man is little more than an excuse to get Lee and Pleasance together to trade witty insults, but the two actors are clearly having so much fun that it doesn’t matter that it really doesn’t move the story along in the slightest. Another scene of Pleasance and his partner drunkenly trying to throw their weight around in a pub to get one more drink after the rest of the punters have gone home to bed shows that despite being typecast as bad guys and haunted heroes, Donald Pleasance was a hell of a comedian.

“Death Line” isn’t all fun and games, though. The centerpiece of the film is a five minute, single-take tracking shot that conveys an incredible amount of story without any dialogue or even much action. A slow tracking shot punctuated by the sound of dripping water and later, a heartbeat, does a 360 round a room revealing dead bodies festering with maggots and eventually, the missing man from the beginning, still alive but clearly shell-shocked.

The camera pulls back through a window in the tiny cell he’s being held in and pans across a raggedy-looking man, crying over the body of a similarly raggedy-looking woman. The camera doesn’t stop its creeping journey, and we move past them, through a tunnel where we hear the ghostly sounds of workmen digging followed by a cave-in as we pan up a pile of rubble and human remains, and finally cut to a shot of a train pulling into the nearby station. It is, simply put, a stunning piece of directing and deserves a place alongside the prom scene in “Carrie” and the scenes of Danny Torrance riding his Big Wheel through the Overlook Hotel as one of the most visually arresting sequences ever filmed for a horror movie.

The monster of the movie, the aforementioned raggedy-man, deserves special mention as a character who is almost Frankenstein-like in how he can elicit both sympathy and repulsion. He’s a proper movie monster who’s handy with the business end of a shovel, but he’s far from evil – he’s just a scared, lonely creature living the only way he knows how. At the end of the film where he runs amuck, mindlessly aping the only three words he knows, “mind the doors”, which he’s heard repeated in the station hundreds of times every day, it’s hard not to wish for his death not out of revenge or disgust but out of the pity you’d feel for a wounded animal that has to be put down.

If we have to look for flaws in “Death Line” they’d clearly be found in the young couple at the center of the movie. Between the bravura performances from Donald Pleasance on one end and Hugh Armstrong as the “Man” at the other, Alex and Patricia come off as wooden and hard to identify with. It’s not a deal-breaker, though. In a way, Alex is reminiscent of the young American expats who often serve as hero characters in Argento movies. Held to that standard, his performance doesn’t quite seem so bad.

It would not be inaccurate to describe “Death Line” as the British version of “Texas Chainsaw Massacre”. They both feature inbred cannibals cut off from human society who are oddly sympathetic, and both are fairly gory movies that modern audiences might find tame in the context of their splatter-promising titles. If nothing else, “Death Line” is proof that there are little-known classics still out there waiting to be discovered by new generations and finally given the notoriety they deserve.